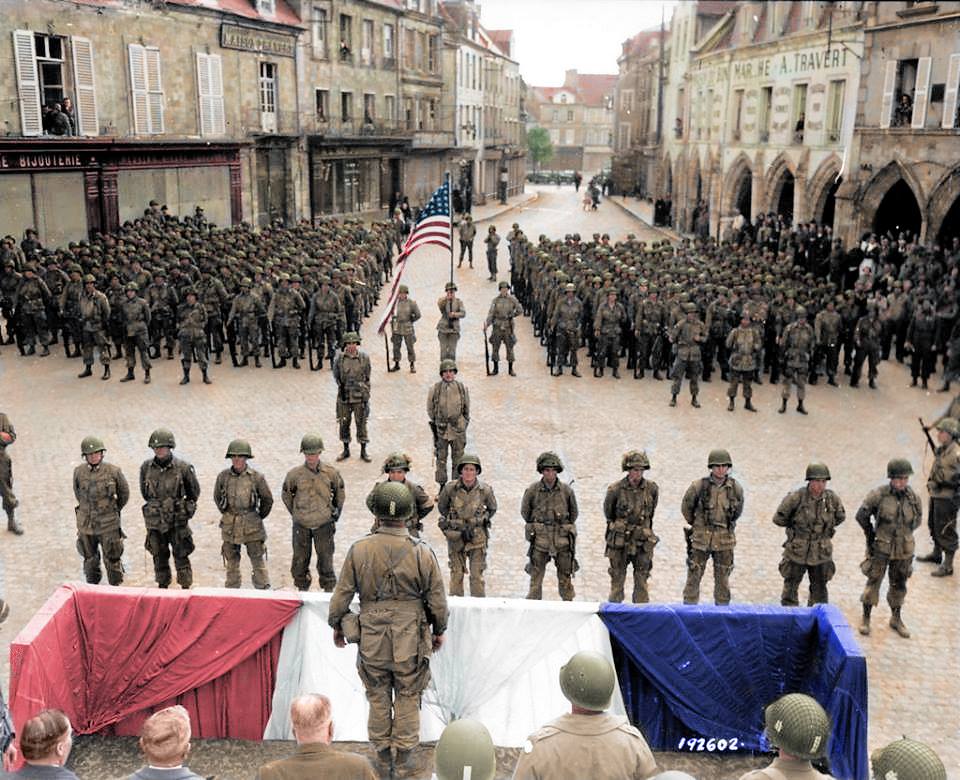 -S/Sgt Frederic A. Bahlau, H/506th (he would receive another Silver Star during WWII)

Nilbogtraf: https://www.poets.org/poetsorg/poem/carentan-o-carentan, poem written by a paratrooper.
By Louis Simpson.

Trees in the old days used to stand
And shape a shady lane
Where lovers wandered hand in hand
Who came from Carentan.

This was the shining green canal
Where we came two by two
Walking at combat-interval.
Such trees we never knew.

The day was early June, the ground
Was soft and bright with dew.
Far away the guns did sound,
But here the sky was blue.

The sky was blue, but there a smoke
Hung still above the sea
Where the ships together spoke
To towns we could not see.

Could you have seen us through a glass
You would have said a walk
Of farmers out to turn the grass,
Each with his own hay-fork.

The watchers in their leopard suits
Waited till it was time,
And aimed between the belt and boot
And let the barrel climb.

I must lie down at once, there is
A hammer at my knee.
And call it death or cowardice,
Don’t count again on me.

Everything’s all right, Mother,
Everyone gets the same
At one time or another.
It’s all in the game.

I never strolled, nor ever shall,
Down such a leafy lane.
I never drank in a canal,
Nor ever shall again.

There is a whistling in the leaves
And it is not the wind,
The twigs are falling from the knives
That cut men to the ground.

Tell me, Master-Sergeant,
The way to turn and shoot.
But the Sergeant’s silent
That taught me how to do it.

O Captain, show us quickly
Our place upon the map.
But the Captain’s sickly
And taking a long nap.

Lieutenant, what’s my duty,
My place in the platoon?
He too’s a sleeping beauty,
Charmed by that strange tune.

Carentan O Carentan
Before we met with you
We never yet had lost a man
Or known what death could do.

huncho_heis: Some of the most impressive Americans of all time.

Boomerdude: These guys did things we can only imagine now. #neverforget

Previous Post: « Chancellor Merkel is a fan of President Trump – Germany To Slaughter Free Speech
Next Post: Iran Accuses Foreign Enemies of Sponsoring Violent Protests—Just Like The CIA Did in 1953 »