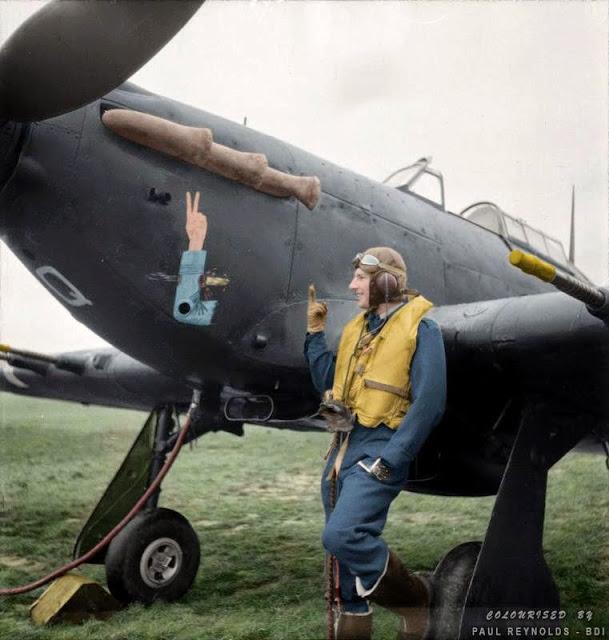 [Description original photo:] (https://www.iwm.org.uk/collections/item/object/205210115) “Squadron Leader J A F MacLachlan, the one-armed Commanding Officer of No 1 Squadron RAF, standing beside his all-black Hawker Hurricane Mark IIC night fighter, ‘JX-Q’, at Tangmere, West Sussex. MacLachlan flew bombers in France in 1940, but transferred to fighters in June 1940 and shot down 6 enemy aircraft during the Battle of Britain. He joined No. 261 Squadron RAF in Malta, as a flight commander, and was shot down in February 1941, as a result of which his left arm was amputated. He quickly returned to operations after being fitted with an artificial limb, flying with No. 73 Squadron in North Africa, but in July 1941 returned to the United Kingdom to take command of No. 1 Squadron. The Hurricane is sporting his personal emblem showing his amputated arm waving a ‘V’ sign. He was again shot down in 1943 and became a prisoner-of-war, by which time his score had risen to 16.5 victories.”

>On 18 July 1943 the P-51 Mustang in which he was flying was hit by German flak or suffered engine failure and crashed over France. The Germans reported him as a prisoner of war but he died in a military hospital from his injuries. MacLachlan was awarded a second Bar to his DFC on 30 July 1943 in absentia.
.
.
.

>MacLachlan lingered for 13 days before succumbing to the wounds on 31 July 1943. He was buried at Pont-l’Évêque Communal Cemetery in Grave 4, Zone 7. French civilian Monsieur Huet and his son attended the funeral that was administered by a German priest. They took a photograph of the grave which was covered in flowers by French civilians. A wooden plaque was placed there with the words “He died so France might live”— German authorities quickly had it removed.

mercifromage: Yeah that “V” is the equivalent to holding up a middle finger in America

Previous Post: « “Don’t fear what could happen. Fear letting that be the reason why you didn’t move forward.” Haley D Rickett
Next Post: A little Russian girl touches her dead mother just after the liberation of the Ozarichi concentration camp in Belarus; c. March 1944 »