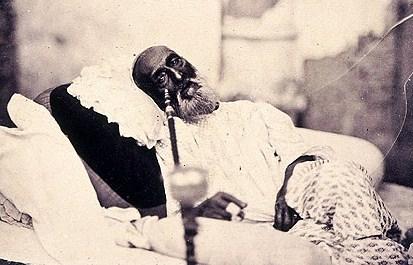 Lord_Cornwallis_III: Fascinating early photo of one of the anti-British rulers of India. He was a nominal Emperor, as the Mughal Empire existed in name only and his authority was limited only to the city of Delhi (Shahjahanbad). Following his involvement in the Indian Rebellion of 1857, the British exiled him to Rangoon in British-controlled Burma, after convicting him on conspiracy charges. He looks like he would have trouble actually getting up from his day bed!

Previous Post: « German WWI submarine, designation SM U-118, washed ashore in Hastings, East Sussex, England, right in front of the Queens Hotel, February 23, 1919. The submarine was being towed to France to be scrapped when the tow cable snapped during a storm.
Next Post: “When I was a young officer…” James Mattis »