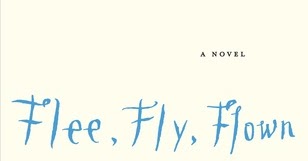 My grandfather used to sing a short song to us when we were kids. My mom said it was old even then.

I’d really appreciate any help. Thanks!

hillsonghoods: The song that you’ve asked about is pretty clearly a playground rhyme/campfire song that usually gets called something like a variation on ‘Flea Fly’ or ‘Flee Fly Flow’; you can see [a YMCA campfire group performing it here](https://www.youtube.com/watch?v=WNLS8GuLI2k).

The origin of such campfire songs and how they became campfire songs is inevitably unclear; it’s not the kind of thing people necessarily keep detailed records of like they do with copyrighted songs. However, it seems clear that the song had become established by the 1960s. [Someone on the internet called Azizi Powell has made an argument](http://pancocojams.blogspot.com.au/2013/01/flea-fly-flow-cumala-vista-rhyme-songs.html) that the campfire song is based on [a 1940s tune called ‘El Cumbanchero’ sung by Desi Arnaz](https://www.youtube.com/watch?v=IfXv_IditPg) (later of *I Love Lucy* fame); ‘El Cumbanchero’ does repeats ‘cumba’ similarly to how the ‘Flea Fly’ song repeats ‘cumala’ or ‘cumulata’. The song was definitely well-established as a campfire song by the time of [Marsha Hunt’s 1973 funk version ‘Oh No! Not The Beast Day!’](https://www.youtube.com/watch?v=Xr-90GzKdHo), judging by the group vocals on the track. The [1964 Chubby Checker song ‘Cu Ma La Be-Stay’](https://www.youtube.com/watch?v=Bnlg3fIGwMo) is also clearly related to the rhyme.

Alternatively, one [Ben Truwe on a Google Answers thread](http://answers.google.com/answers/threadview?id=497299) in 2005 argued that the nonsense rhyme is instead a degeneration of a previous lyric, ‘Flea Fly Mosquito’ ([captured here](http://www.weknowcampfiresongs.com/detail-flea_fly_mosquito.html)), in which your ‘coomalotta coomalotta coomalotta feastday’ is a sort of degeneration of ‘calamine, calamine, calamine lotion’ combined with perhaps a lyric that ended in ‘bug spray’ – if so, the song might have once been a long-forgotten radio jingle for a brand of bug spray, or perhaps invented by, for example, a scoutmaster in order to encourage children on camp to protect themselves from insect bites. Of course, it might also be that the ‘bug spray’ lyric is a more recent invention by a scoutmaster or camp counsellor aiming to provide a positive message that could be retroactively fitted to what was a nonsense rhyme based on a half-remembered Spanish-language lyric from the 1940s.

Previous Post: « Three American Presidents were assassinated in the 36 years between 1865 and 1901, making it a shockingly common occurrence for a modern first world nation at the time. Do we know what affect this had on the national psyche? Did any prominent figures reflect upon it publically?
Next Post: The poorer quality of life in the Eastern Bloc compared to the West is often cited as evidence of the inferiority of centrally planned economies. However, Western Europe got a huge head start with the Marshall Plan. How important is this variable when contrasting West/East during Cold War? »