Few days ago, Atlanta’s airport – the busiest airport in the world and hub for Delta Airlines – has been without power with no end to this in sight. Along with a noted lack of coverage on TV news, information has been lacking from all sources, including the Airport itself  (Twitter).

Conspiracy theorists asked “Why the lack of information about the ongoing power outage at the busiest airport in the world? (Atlanta)” Right in the middle of this over 12 hour supposedly complete air traffic shut down, a single plane was mysteriously allowed to leave the airport. Which leaves us with an obvious question. Just what was so special about this lone permitted flight?

Prior to that, interesting Snapchat from the Atlanta Power Outage – three blacked out SUVs and someone being removed from the plane

This lady said there were “lots of police and fire trucks rushing to a plane on the runway.” https://www.instagram.com/p/Bc0IuaknNY8/ 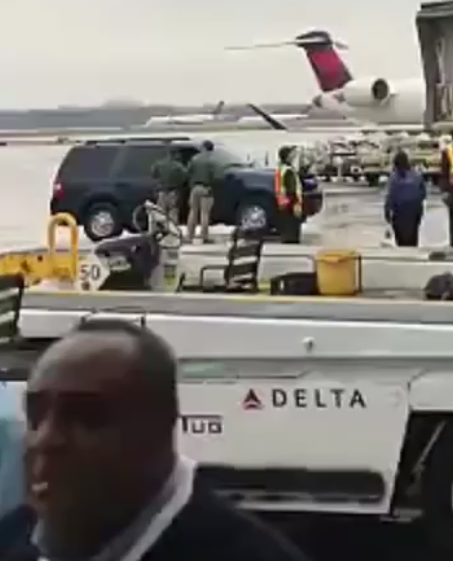 Apparently, it seems it basically boils down to them wanting to smuggle something out of the country undetected.

Catsarenotreptilians: “… they wanted this plane to be undetected by the general masses, also no custom agents and no going through customs alone warrants the idea of something nefarious with this plane occurred/is occurring.

Conspiracy Theory: Tel Aviv, transferring nuclear warheads to Israel to use as a false flag to exterminate the Palestinian people.

“Israel is already a fully armed with nukes. And yet they refuse to abide by nuclear non proliferation agreement? Oh yes.”

Anyway, back to the 4chan Users Find Evidence Atlanta Airport Blackout Was Part Of Intentional Cover-Up

becomesthehunted: Jesus this is terrifying. A plane not only gets to go in and out of the USA without a single customs agent looking at anything, and then leaves during a blackout with no reporting about it the whole time? What the hell could be on that plane?

Corndog_Puncher: Why would they go through all this trouble when they can just fly them from an AFB? Doesn’t make sense.

There is definitely a story to the lone flight allowed, but why would they need to do all this to load a plane with warheads and risk someone seeing or figuring it out when they have so many more discreet options?

bearreb: Don’t think they could have done it without the blackout?

Because they can and probably do allllll the time.

Noting the geographic proximity to Israel.

climb-via-is-stupid: Planes can depart from an airport with no lights at their own risk. We (ATC) have verbiage for this specific situation

Actually worked a situation like this where we had our runway lights go out because of a storm surge. The passenger carriers wouldn’t depart, but several bizjets and cargo jets did.

Star-comandante: Remember, only cargo planes were still taking off.

psy_raven: Eh, I’m totally on-board with something being smuggled out of the country. But to arm Israel with a nuclear warhead is silly. If our govt, CIA, or military was involved they would have the use of military airports and our bases in Israel. No need to take out an entire airport. Besides, Israel already have nuclear weapons.

I think if Israel is involved somehow, it’s acting without the knowledge or approval of the US govt. What could they have smuggled out? Probably chemical weapon or something like that so they can kill everyone in case of war with Iran or some other force.

>By far the most popular suggestion is that this blackout was part of an operation to discreetly move some W80 variable yield nuclear warheads out of the country, and into the hands of the Israeli’s.

And wonder if that isn’t backwards? Maybe they are smuggling nukes *into* the US?

BanMikePantsNow: As usual, the US gives Israel a pass to conduct its criminality.

kamspy: If nothing else we should figure out how private companies can bypass customs and produce their own customs forms.

thebabyseagull: > A Jewish owned company based out of Israel who specializes in the transportation of nonstandard cargo such as, live animals and dangerous goods.

Odor_punchout_16: Well, considering the CDC is based in Atlanta, and every single deadly virus/bacteria/microbe is stored there…..

Thuroughaway9: Why would they have flown through the busiest and most technologically advanced airport in the United States?

HeyEatMyShit420: Get ready for a false flag brought to you by the blood sucking jews!!

Hwhiskee: Just going to leave this semi crazy theory here… What do we have that Israel doesn’t have. They have plenty of nukes. The blackout per the article would make nuke detection offline. We know the plane came from the closest out of country location that wouldn’t go through customs, mexico city, then stopped in Atlanta during the black out, then immediately went to Israel. Well something we have that most places don’t have that would require a black out to move out of the country. Weapons grade Plutonium. Used for creating “implosion” weapons. So say you were, i dunno, in a war for land and you wanted to damage to people like the Hamas mostly huddled on the gaza strip. What could you use that would have little mortality rate outside the effected area? Look up Fat Man on wiki. Just a theory, but its also a little supported with Trumps f— everyone the capital is here stunt in Israel. Just sayin’

amandapanda741: The article never mentioned the destination of the plane. Where did it go? This should be easy to look up. We only know the plane came from Mexico City. I want to know its final destination.

DoctorShlomo: Did anyone discover where that plane landed?

expletivdeleted: there’s a f-ton of redundant systems. for them all to be disabled at once? by a single fire?

Hamsterarcher: If it went to Mexico, could it be something for the ms-13 gang?

A drone captured images of a fleet of 50+ UN armored vehicles at a State Dept. warehouse in Hagerstown, MD. Matt Dubiel, station manager of Chicago radio station WCKG 1530 AM, says UN vehicles are already in Chicago. Glassclose: Most likely going to be shipped off somewhere overseas.

Gaaforsausage: How long have those vehicles been there? Days? Weeks? Months? Also, how many similar squads of vehicles are in various other locations and have been there for a while?

REAPEROFDAKARMA: Looks Legit… although they have been there a while.

Previous Post: « “We are shaped by our thoughts; we become what we think.When the mind is pure, joy follows like a shadow that never leaves.” Buddha
Next Post: Media Matters boss David Brock paid former partner $850k ‘blackmail’ settlement. James Alefantis was also a defendant in the lawsuit »