A local chef, who had his food handler’s license was raided by a dozen cops and health department officials who stole all of his equipment because he fed the homeless without a proper permit. 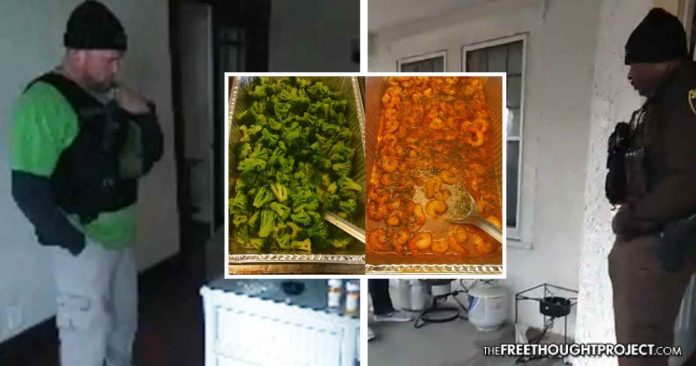 Decatur, IL — A kind and loving local chef woke up Tuesday morning to a dozen cops and health department officials raiding his home. Khemuel “Chef” Sanders had his business shut down, all of his equipment stolen by the state, and his life ruined because he made food in his home to give to the homeless.

Unfortunately, in the land of the free, it is against the law to help others or try to make a dollar without first paying the government for the privilege of doing so. While the state will claim this is for the safety of others who may consume the food, the reality is that it is a revenue generation scheme.

To be clear, Sanders is a licensed food handler. He paid the government for the privilege to handle food, however, he was doing it in a manner which they disapproved.

“I have my food handlers license. Expires at the end of this month. I was in a restaurant but the owner got in some trouble and shut everything down. It was out of my control that’s the only reason why I was cooking out of my home,” Sanders explained.

Instead of cooking the food in a restaurant, Sanders used the industrial equipment at his home. He cooked everything exactly the same way, but this now gave authorities a reason to steal his things, charge him exorbitant fees, and ruin his life.

The raid has left Sanders a broken man and in a Facebook post Wednesday night, we can see just how broken.

Below is a copy of the warrant police used to justify the raid. If it wasn’t real it would be comical. The warrant gives police permission to confiscate (steal) all of Sanders’ commercial food preparation equipment—for feeding people—and they did. 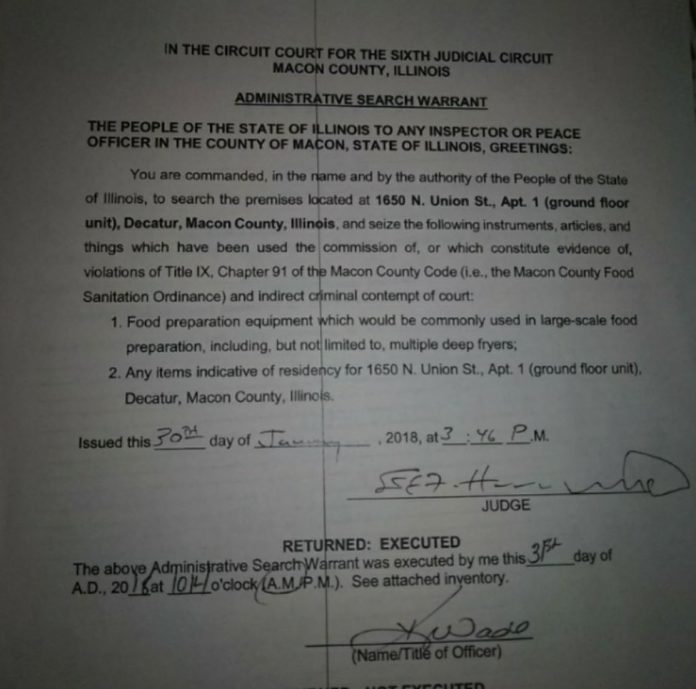 Sanders filmed part of the raid and in the video, we can see a large yellow truck backed into his driveway as the ‘heroes’ from the Macon County Sheriff’s Office and the Health Department steal this otherwise innocent man’s livelihood for daring to feed the homeless and make a living without the proper permit.

Missing the point entirely is the fact that homeless people are voluntarily eating the food—which makes it consumable. In fact, the other people who were buying the food also made it consumable by voluntarily giving Sanders money in exchange for it. There is no need for the state to enter this scenario at all.

Still, however, the department said it is illegal to distribute food from your home without first paying them and so they claimed the right to invade an innocent man’s home, rob him, and ruin his life.

To show just how ridiculous this raid was and how authorities will go to any length just to do what those above them say—just to do their job—according to Sanders, deputies frequently purchased food from him, as well as the sheriff. Yet still, when it came down to it, instead of a warning or merely telling him to stop until he got the right permit, the sheriff’s office and the health department put discretion aside and raided this man’s home and stole his belongings—for cooking food.

To show just how big of a heart Sanders has, amid the horrific nightmare that is having the state steal your livelihood, he is still calling for peace and love and wrote the following in a Facebook post Thursday morning:

“Good morning fb friends and family. I just need to put this out there. The hate that I seen come across my notifications is hurting me more then me losing my business. It’s sad how some of us as a black generation feel we can make racist remarks and think that’s ok. It’s not right at all for no one to be racist no matter what color you are. God bless…”

Please share this story to show the atrocities carried out by the supposed “protectors” of society and the innocent lives ruined by that “protection.”

The official version of the story seems to suggest something else?

Sanders made food in his home to give to the homeless and sell to friends. But the Health Department searched his home and confiscated his cooking equipment due to a lack of proper permits.

Last year, Sanders’ home caught on fire and many in the Decatur community came together to raise funds to get him back on his feet.

But deputies say it is illegal to sell food from your home without the proper licenses.

The health department ruled Sanders was in violation of the cottage food law.

The law went into effect in 2012 and grants small business owners the ability to make certain foods in their home and sell them for profit. But the law only allows certain baked goods, jams/jellies and fruit butters — and those products can only be sold at a farmer’s market.

Previous Post: « “I am willing to serve my country, but .. To worship my country as a god is to bring a a curse upon it” Rabindranath Tagore
Next Post: “Beauty of whatever kind, in its supreme development, invariably excites the sensitive soul to tears.” Edgar Allan Poe »