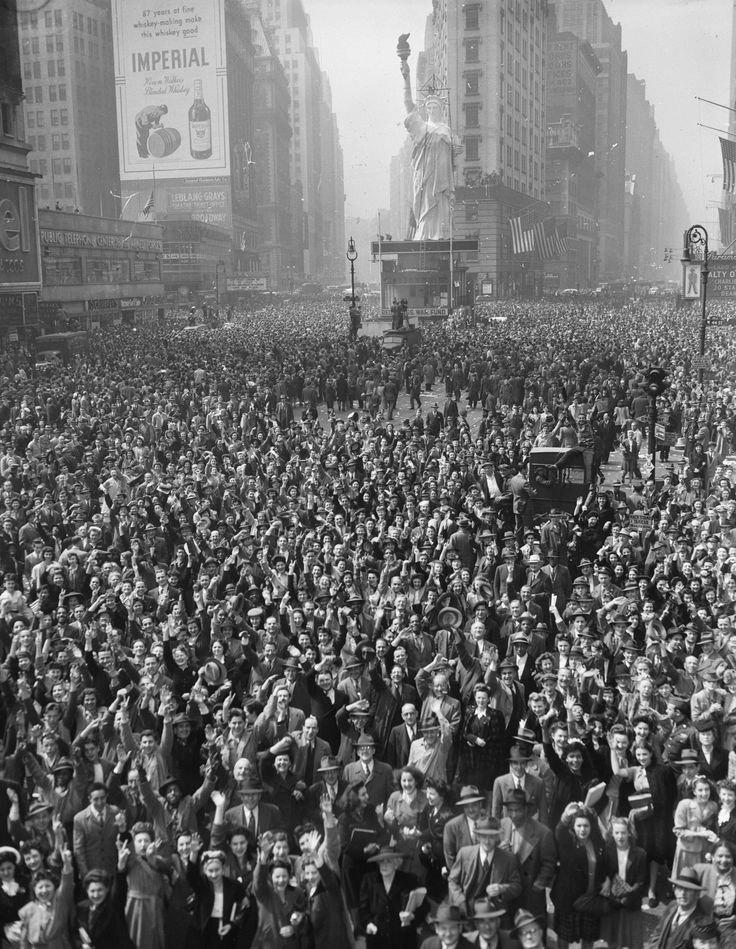 weirdpanorama: I swear back then, men owned nothing but suits.

Random_name_lazy: If you look closely there is a lot more women than men in this photo.

philjorrow: My grandpa was there that day! He said he ripped a big fart

Edit: my grandfather has dementia

yayayeet65: I was talking to my roommate about WWII last night. Like. Just imagine what history would have been like if a country captured hitler. Would the war have lasted longer? What if he was accepted in that art school?

Piepounding: When I was bartending, Imperial was our well whisky.

captaingigglefarts: So the statue of Liberty used to be in time square?

CoconutMochi: I wonder if we’ll ever have an event this momentous in our lifetimes

laughingwarlock: Look at all those proud Americans who hate Nazis

shillyshally: Just now realized I never thought to ask my mother what this day was like.

Ask your parents stuff now. How they met, what they remember of their hippy days, what your birth was like. Once they are dead, you will be SOL.

Okgoahead757766854: Just think that some of the people there will have relatives in the future who sympathize with Nazi.

thunderplunderer: Wow, the statue of liberty was so young back then. Hard to believe she’s grown to be over 100 feet tall.

LordFoulgrin: Damn it, I give up. I can’t find Waldo. I always suck at these things.

tsw_distance: “Better take my horse and carriage through this absurd crowd of people” said one guy on this very particular day.

ngram11: Back in the good old days, when we fought nazis instead of normalizing them

Edit: I’m referring to [this article ](https://www.nytimes.com/2017/11/25/us/ohio-hovater-white-nationalist.html) which is weirdly sympathetic. And I realize this is a nuanced topic (coverage of hate groups) but it is certainly NOT the kind of article we would have gotten from the Times in the 40’s. Which was my point.

Here’s a quote “He is the Nazi sympathizer next door, polite and low-key”

“He said that while the Nazi leader Heinrich Himmler wanted to exterminate groups like Slavs and homosexuals, Hitler “was a lot more kind of chill on those subjects.”

I don’t care who you are, anyone in this photo would have rightly punched this asshole in the face

Dirtydancin27: Is that lady in the lower left flippin bird?

“Mobs of Anti-Fascists take to the streets to celebrate using violence to censor political opponents.”

GoGoPoweRanger: For a second it looked like some people were doing the nazi salute to troll Hitler.

Scottland83: I wonder how we will celebrate Trump leaving office.

panic_bread: There was a lot more room for people in Times Square back then.

Phobophilic: Anyone know why most are looking in the direction of the camera?

Darthteezus: I imagine they’re all looking at the ticker and then it says “America wins!” “Germany blew a 3-1 lead!”

GreedyiReidy: Can someone explain the two fingers pointing in the air?

DSMilne: That’s a large crowd of antifa right there……

WellObviously1: Not quite inauguration size crowd, but a nice effort. /s. (Or whatever the sarcasm symbol is)

anti-unique_username: FAKE NEWS!!! This is really a photograph of Trump’s inauguration.

TheDemetrious: If you really examine the people in this picture it’s crazy to think that this is in 1945!

AuspiciousAuspicious: I love how simple advertising was back then, pre-Lifestyle.

“We’ve been making whiskey for a long time, so our whiskey is really GOOD.”
Beech-Nut: The roof across the street from the imperial billboard, you can see dude standing there with his rifle.

tecknikally: And today, about 30% of Americans are pissed the Allies won the war. Previous Post: « “Of all sad words of tongue or pen, the saddest are these: “It might have been!”” John Greenleaf Whittier
Next Post: Empire State Building Window Washer, 1936 »