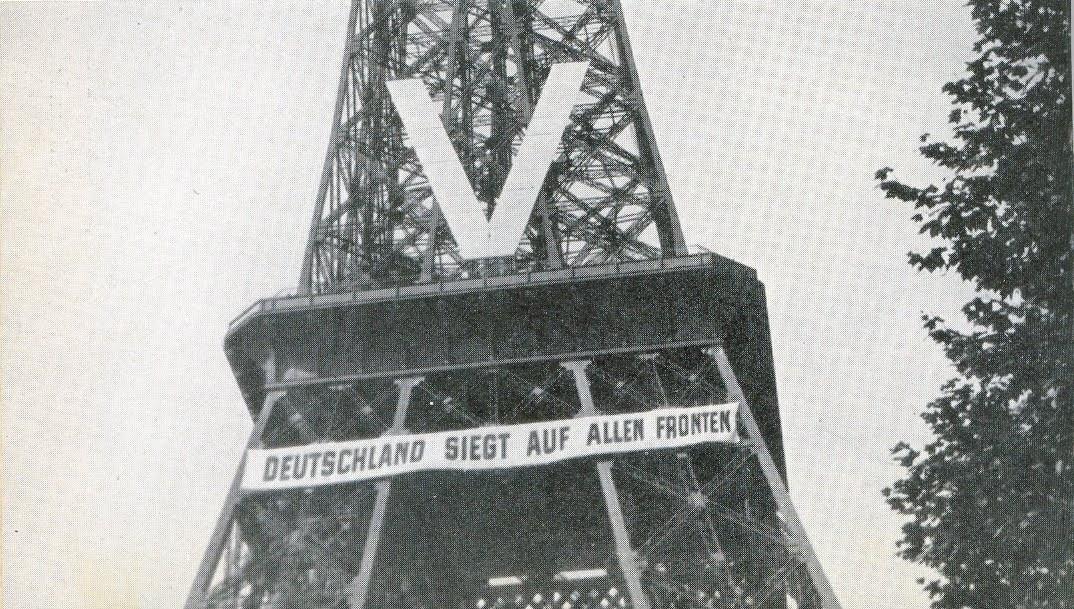 searchfornirvana: In the aftermath of Nazi Germany’s swift conquest of France, Paris was turned into a showpiece for the totalitarian Nazi regime. Under the official policy of ‘Jeder einmal in Paris’ (‘everyone in Paris once’), each German soldier was promised one visit to the captive French capital. In addition to the flag of the Third Reich being flown over all government buildings, many famous pieces of Parisian architecture were also draped with the banner of the swastika, and Nazi propaganda was pervasive. The clocks of the city were even changed to Berlin time.

At the beginning of 1941, Victor de Laveleye, a former minister for the Belgian government and a director of the BBC broadcasts for Belgium, advocated the usage of the ‘V for victory’ symbol for the first time. Usage of the symbol soon spread rapidly throughout occupied Europe, and Winston Churchill eventually publically endorsed the symbol beginning in July 1941. By that time the symbol’s presence was pervasive as resistance movements frequently placed graffiti featuring the symbol in order to inspire the occupied masses.

The Germans were unable to suppress the usage of the symbol, so they decided to co-opt it for themselves. In July 1941, various famous public landmarks in Paris-including the Eiffel Tower, the Palais Bourbon, and the Place de la Concorde-were adorned by a massive letter ‘V’ and an accompanying banner which read ‘Deutschland Siegt Auf/An Allen Fronten’, translating as ‘Germany is Victorious on All Fronts’. Similar banners appeared on landmarks in occupied territories all over Europe, including on the Parliament of Norway and in Pilsudski Square. Not to be deterred, various resistance groups frequently altered the ‘S’ in ‘Siegt’ to an ‘L’, changing the meaning of the phrase to ‘Germany Lies on All Fronts’.