Trump retweeted them from Jayda Fransen, the deputy leader of the far-right group Britain First, the group’s tweets read: “VIDEO: Islamist mob pushes teenage boy off roof and beats him to death!” and “VIDEO: Muslim Destroys a Statue of Virgin Mary!” and “VIDEO: Muslim migrant beats up Dutch boy on crutches!”

Britain First is a far-right group that opposes multiculturalism and what it calls the “Islamization” of Britain. It has run candidates in local and national elections, with little success, and has campaigned against the construction and expansion of mosques.

Did a ‘Muslim Migrant’ Beat Up a Dutch Boy on Crutches?

On 29 November 2017, United States President Donald Trump retweeted three videos from Jayden Fransen, the deputy leader of the far-right anti-Islam political party Britain First who was found guilty of religiously aggravated harassment in November 2016. As this group has a penchant for sharing out-of-context, misleading, and falseinformation, it wasn’t surprising that at least one of these videos, which purportedly shows violent acts committed by Muslims, had a misleading caption :

Although the video is frequently accompanied by the caption “Muslim migrant beats up Dutch boy on crutches,” there is no evidence to support this assertion, which in fact came, like so many other unfortunate assumptions, from its comment section.

This video was first posted to the web site Dumpert.nl, a popular video portal in the Netherlands, in May 2017. Although the original posting largely focuses on the act of hitting a person on crutches, and it was not shared with any claims about the attacker’s religion, some people on the comment section naturally — and baselessly — assumed that the perpetrator was Muslim. As the video was reposted to other web sites, the unfounded claim that the attacker was a Muslim migrant followed it. Shortly after this video was posted to Dumpert.nl, Dutch police officers were able to locate the attacker and arrest him. A news report from the Telegraaf identified him as a 16-year-old boy from Monnickendam. The report made no mention of the boy’s religion.

Further, when this months-old video was brought back into the spotlight in November 2017 thanks to a retweet from President Trump, Dumpert.nl posted a short article that mocked Trump for sharing the video:

The Netherlands Embassy in the United States also took to Twitter to tell to President Trump that “facts do matter” and that the attacker in the video was not a Muslim migrant:

(By the way, fake news! Perpetrator was not a Muslim and not an immigrant, but nice try Trumpie)

The NFL finds a solution to both their ratings and political problems. 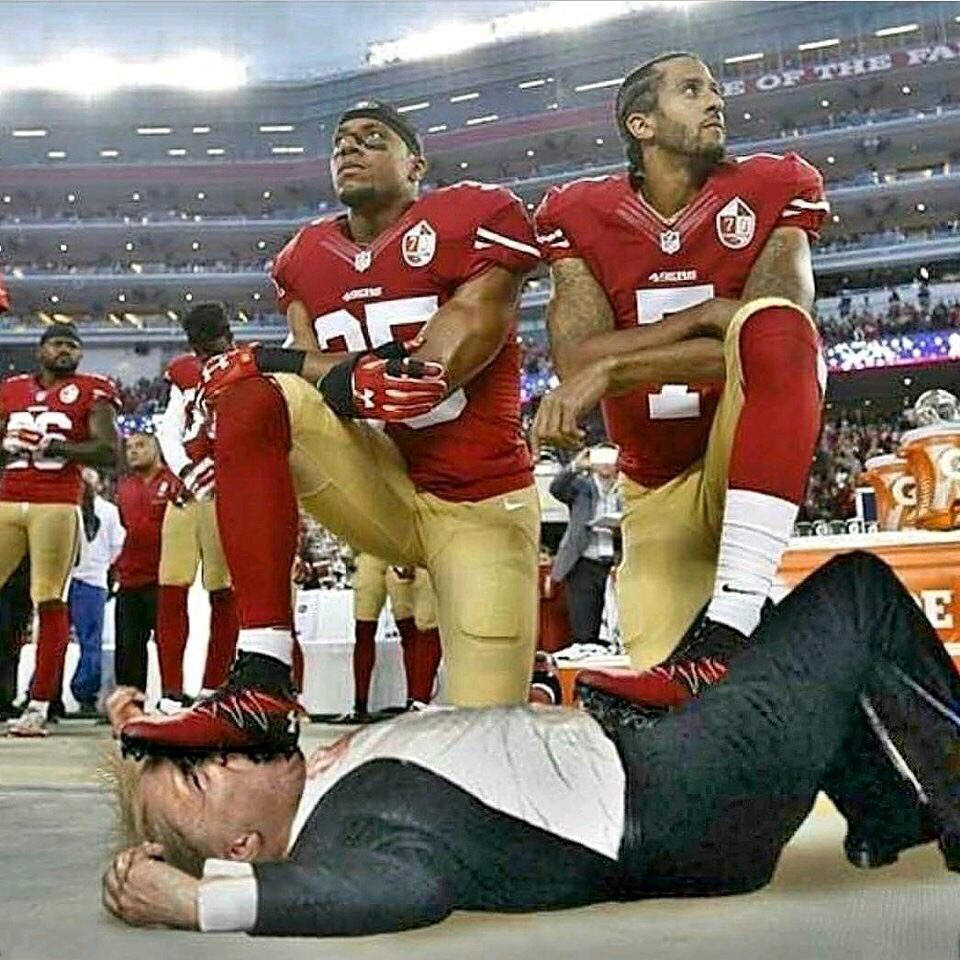 I’ll let ya in on a little secret; The politicians and media figures from both sides are in on a big scheme, where they pretend to be enemies. Behind the scenes they enjoy the fruits of a lavish lifestyle together. They are all acting, it’s called “political theatre”. It’s just like WWE. All pretend

When you get to a certain level of the federal government, you are merely an actor. Your job is to convince your constituents and followers, that you care about the party and the people, and that the “other side” is the reason for all the problems.

TPTB either select these people because they can trust that they will perpetuate this scripted and fake presentation of politics, OR they are channeled in through a secret society like freemasonry or an Ivy League fraternity.

In reality, behind the scenes these guys all get along and enjoy lavish parties and vacations together. But, when the lights come on and the stage is set, they put on their masks and go back to the script.

I believe there is a group of “social engineers” who literally write and screenplay the political drama and theatrics of each 4 year presidency. Even the presidential candidates are in on this. This is the big secret of politics that most of the masses don’t understand yet, and a decent portion of this sub has yet to embrace this either.

We need to realize this on this sub. I’m not even exaggerating a little bit, these people are legitimately actors playing a political role to add legitimacy to the left right paradigm.

The cognitive dissonance at T_D was off the charts today. Major deflection and still obsessed with the candidate that lost the election. I updated their latest info graph to remind them of their God Emperor.

“Shhh! Go back to bed America, your government is in control!”

MARCORUBIO_RAVEPARTY: Politicians have staff that identify goals and outline paths to achieve them. Social engineering is a huge part of reaching those goals and we see it every day as they cozy up with the media and newspapers. I do believe that they are all friendly with one another when the camera is off because they can all give each other a nod knowing that they’ve made it to the big leagues. Their names are in the history books and depending on how well they’ve worked the people of the country, their families can reap the fruit of their accomplishments for future generations.

goldmanstackss: There is no right or left, red or blue. It’s establishment versus The People, and right now they’re winning, and we’re fighting. Sad.

MethaCat: This same thing happens on a global scale. Or do you think China/Russia are not run by a small elite that works very closely with a U.S./ Western Europe elite?

The Philosophy of Trump 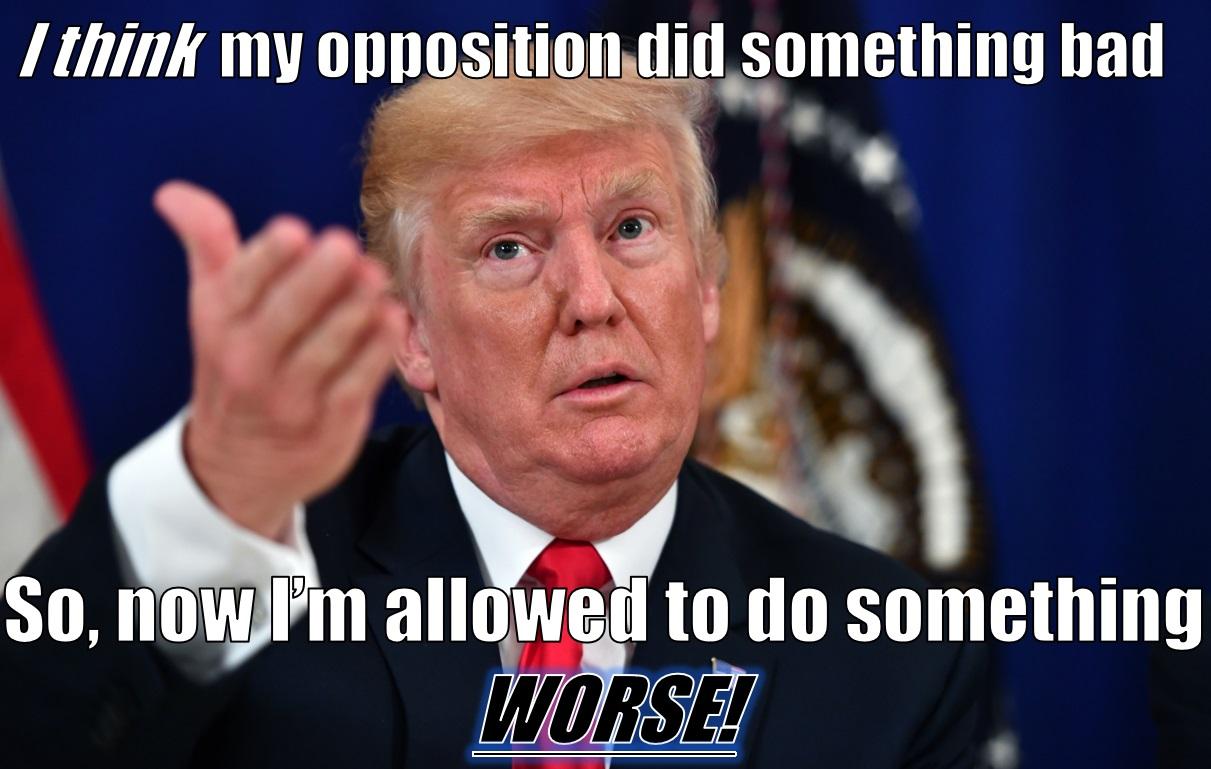 iracundiarock: If you were a politician, would you rather have a fake enemy or a real one in a position of power? I don’t think they’d even allow someone they don’t collude with into seats of government at all.

We’ve been on the same path driven by the same driver(s) since at least the 60’s. It doesn’t matter if there’s an ‘R’ or ‘D’ before their name. I’m reminded of a hidden video I saw during the Bush presidency where some nefarious foreign body was trying secure a meeting with powerful politicians. The person being recorded was none other than future VP Joe Biden, offering up a meeting with none other than President Bush. Tell me how could this be, when publicly, they’re on opposite sides? (I do not recall the purpose of the video, other than to show that these politicians are quite cozy with one another).

Additionally (perhaps a bit of topic), it’s why we spend so much on the military and all that entails (black budgets etc). We [i]have[/i] to. Otherwise, our own nefarious deeds would bring us to our knees.

This is hidden in plain sight, both sides have fallen like Humpty dumpty for the divide & conquer, so even if it’s announced, it’s irrelevant.

ch0kboy: It’s more like the Rothschild Family funding both sides of a war.

Burn_Kick: Thats what i have always secretly pondered.

Pyronic_Chaos: This post was much need with all the partisan hacks posting PV and T_D sh*t recently. People fall for that propaganda so easily.

gibberous: Divert the attention, focus on irrelevant issues with no [true] solution, keep the masses confused and angry

gaslightlinux: Kerry and McCain. The perfect Democrat Vietnam candidate and the perfect Republican Vietnam candidate both waiting in the wings for when they were needed. Neither made it to president, that’s not where they were needed, because that’s not where the people’s narrative went. However, they were both on Vietnam committees together, and would walk out together (why? they seem so different in their views), but that lack of quorum meant those Vietnam committees died.

Aye_or_Nay: I saw two senators on the news, each making their point in opposition to, and in favor of some issue.

I have seen more convincing acting at a junior high play.

Singularity2soon: I keep expecting “Mean Gene” to pop out with a mic at any second.

TheSonofLiberty: Martha’s Vineyard has both rich, elite democrats and republicans.

joosnigga: Any partisan person is the enemy of the people.

MR902100: Social engineers writing the 4 years of a presidency would be a waste of their time. All they need is to distract the public from what they’re doing, and politicians making asses of themselves on their own works well enough. Just like in wrestling, outcomes may be predetermined (for the most part) but really only high profile matches are choreographed.

davetides: Check out OPs post history, he’s a lefty posing as a conspiracy regular who knows his sides almost completely corrupt so he’s trying to lump Trump in with TPTB. It’s so obvious it’s funny honestly.

I’ll let you in on a little secret, when anonymous nobodies on the internet act like they know secrets they 100% don’t know jack sh*t.

SchticksAndScones: Before Trump I would have been in complete agreement. But Trump really seems like a true Wildcard president. He wasn’t supposed to happen.

nope0001: Sometimes I feel like people say things like this on the advice of personal brand marketing experts so that grandmothers will quote them in chain e-mails.

Iron_Elbow: I get the feeling it’s right-wing, conservative folks that believe this.

But then, if it’s all the same, why not vote for liberals? Put your money where your mouth is.

Maybe it’s because deep down you know right-wing conspiracy theories and the people who peddle them are fake. Like wrestling. So you vote right of center, because you really are R – you aren’t pretending even though R has succumbed to the dark side of the Force.

Slab_Happy: Just try to vote for the political party that you think will kick you in the balls less vigorously than the other.

wrines: think this is totally correct but with a slight twist or 2:

1) It isnt a grand plan IMO, its just greed (for money and power) and laziness at work. Politicians say whatever they have to in order to GET elected, and then once in office they do whatever their donors tell them to do (regardless of what they promised or what “party” platforms are). So the “acting” is correct, but its to fool the public into voting for them and then continue fooling them into thinking they really *WANT* to do what they promised the people, but the “other side” keeps getting in the way.

2) The candidacy and then election of Trump changed this dynamic. Well, nothing has changed yet in reality, but he has EXPOSED the truth, pulled the curtain back on the system for the public to see, even though the media worldwide, right down to paid shills and trolls in this very sub, keep trying to cover it all up again.

Previous Post: « “One of the greatest things a father can do for his children is to love their mother.” Howard W. Hunter
Next Post: Bully caught on video sucker-punching man with cerebral palsy sentenced to prison »