In 2006. That was when Time looked at the rise of open-publishing platforms like Wikipedia, YouTube, and Facebook, and decided the most influential person was the collective “you.” It was cheesy, trite, and had the exact effect Time wanted: everybody talked about it. 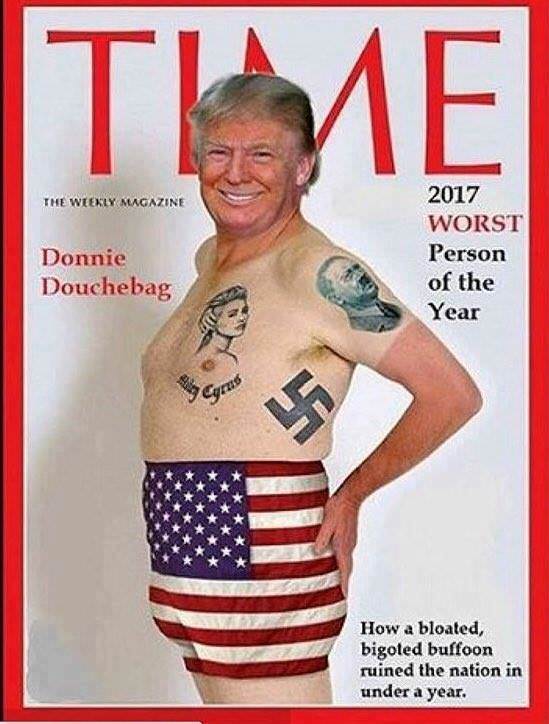 “Man of the Year”—it became “person” in 1999—is arguably the Trumpiest possible tradition in magazine journalism. And not just because of Trump’s narcissism and apparent obsession with appearing on the cover.

On Friday night, Donald Trump proclaimed that he would probably be Time’s “Person of the Year” for 2017 — except that he didn’t really want the honor.

“Time Magazine called to say that I was PROBABLY going to be named ‘Man (Person) of the Year,’ like last year, but I would have to agree to an interview and a major photo shoot,” Trump tweeted. “I said probably is no good and took a pass. Thanks anyway!”

“The President is incorrect about how we choose Person of the Year,” a Time spokeswoman said in a statement. “Time does not comment on our choice until publication, which is December 6.”

“Amazing,” tweeted Time’s chief content officer, Alan Murray. “Not a speck of truth here — Trump tweets he ‘took a pass’ at being named TIME’s person of the year.”

Amazing. Not a speck of truth here—Trump tweets he ‘took a pass’ at being named TIME’s person of the year

President Donald Trump tweeted Friday that he turned down a potential offer to be TIME Magazine’s coveted “Person of the Year” after, Trump says, the magazine told him he would “probably” be given…

If any of this shocks you, you haven’t been paying attention. In fact, Trump’s focus on Time magazine — and especially the publication’s choice for man/person of the year — is a long-running obsession that predates his political career.

“I knew last year that @TIME Magazine lost all credibility when they didn’t include me in their Top 100…,” Trump tweeted in October 2012.

He sounded a similar note the following April. “The Time Magazine list of the 100 Most Influential People is a joke and stunt of a magazine that will, like Newsweek, soon be dead. Bad list!,” he tweeted. (Trump didn’t make the list. This fact should not stun you.)

Liar Of The Free World 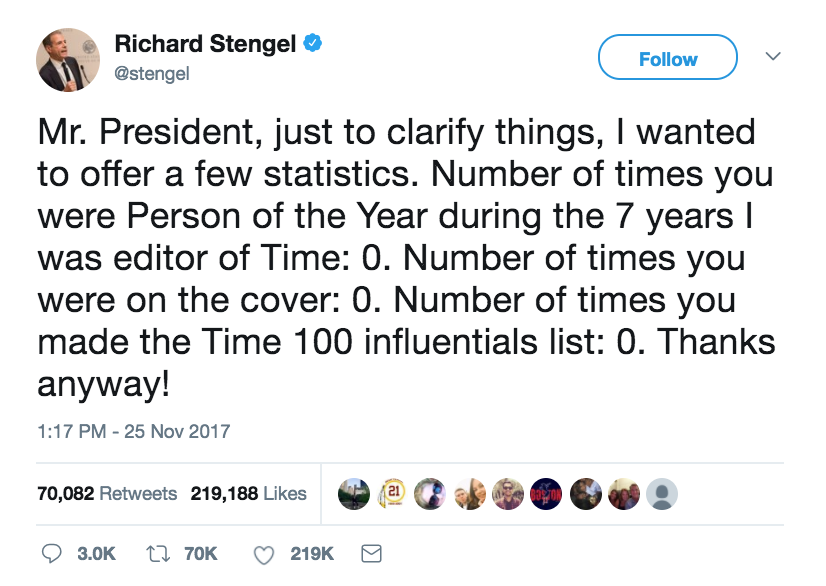 Doesn’t that mean Donald Trump is the current holder of the Fake News trophy? 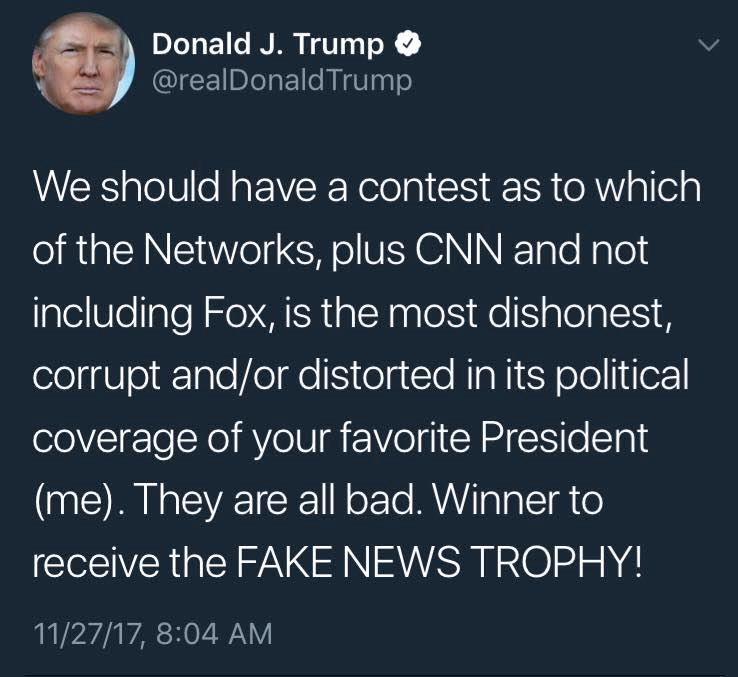 Despite sending a bevy of other tweets between 2012 and 2015 deriding Time for being “paper thin” and “really flimsy,” the magazine returned to Trump’s good graces in 2015 when his out-of-nowhere presidential campaign landed him the cover.

Later that year, however, Trump returned to his previous disdain — after, in his mind, being snubbed for person of the year when Time chose German Chancellor Angela Merkel.

“I told you @TIME Magazine would never pick me as person of the year despite being the big favorite,” Trump tweeted. “They picked person who is ruining Germany.”

(One tweet on not winning Time’s person of the year wasn’t enough for Trump. On the same day as the tweet above — December 9, 2015 — he also tweeted this: “Thank you @oreillyfactor for your wonderful editorial as to why I should have been @TIME Magazine’s Person of the Year. You should run Time!”)

Trump’s yo-yoing views about Time spun back positive in early 2016 when he made the cover again. “Remember, get TIME magazine!,” he tweeted. “I am on the cover. Take it out in 4 years and read it again! Just watch…”

Then, following his election victory, Trump was — finally, in his mind — named person of the Year.He tweeted: “Thank you to Time Magazine and Financial Times for naming me “Person of the Year” – a great honor!”

Trump’s interest/obsession with Time and its “Person of the Year” award goes so deep that in at least five of his golf clubs there hung a Time magazine cover featuring a picture of a cross-armed Trump and these words: “Donald

Trump: The ‘Apprentice’ is a television smash!”

That cover, as first exposed by The Washington Post’s David Fahrenthold, is a fake.

Why does Trump care so much about Time — a magazine that, like all national magazines, has been hit hard by the fracturing of the media and the changing advertising landscape?

Because all of Trump’s ideas about the media were formed in the 1980s. And at that time, Time was a massively important part of the culture. It was a tastemaker — and breaker. And, most importantly for Trump, it had a cover. A cover that, if you were on it, signified success in the broader culture.

The President may want to try to take a selfie like this one …? or perhaps this … Votre Plaisir!

That sort of recognized success is what Trump has spent his whole life craving — and disdaining when he doesn’t receive it. He views himself as someone who, despite his successes and wealth, has never been accepted into the clubs and communities that he covets. He is forever the guy with his face pressed against the glass, watching the people he wants to be friends with eat, drink and be merry in clubs they won’t let him into.

Making the cover of Time was — and is — to Trump a recognition by those very elites that he is one of them. His vitriol when not chosen for person of the year is entirely born of the rejection you feel when someone you want to acknowledge you fails to do so.

If Time magazine was irrelevant and beneath him — as Trump’s latest I-could-probably-have-been-person-of-the-year tweet wants to make you believe — why would he hang fake Time covers at his clubs? Why would he lash out when not chosen in 2015? Why would he urge people to go buy the magazine when he did make the cover?

Trump cares so much about Time and its cover that he wants you to think he doesn’t care at all. Don’t believe it.

Trump Annoyed With Ivanka Over Her Suggestion There’s A Place In Hell For Roy Moore (yahoo.com)

Huh?
That prompted many to as … Is there a relationship between Person Of The Year: Donald Trump and Flat-Earther Mike Hughes?

‘I Don’t Believe In Science,’ Says Flat-Earther Set To Launch Himself In Own Rocket (npr.org)

Is this what is to come our way …?

Previous Post: « Subway Justice
Next Post: Niagara Falls stopped flowing for one day due to an ice jam, 1848 »