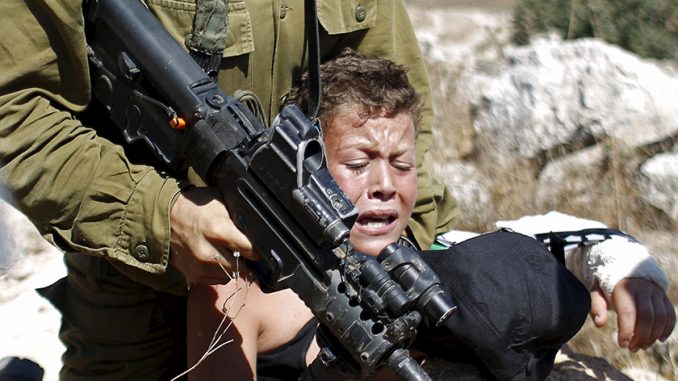 A three-year-old Palestinian boy was shot in the head by Israeli soldiers who say they were conducting ‘training practise’ in the occupied West Bank city of Tubas.

According to a statement by the Palestinian Authority’s Ministry of Health, the child was hit in the head with live bullets. He was taken to Rafidia Surgical hospital in Nablus.

She pointed out that the child’s relatives told “medical staff that he was shot during IDF training in the area.”

“The health situation of the injured child is stable,” the ministry said.

The Israeli military frequently conducts training in Palestinian communities in Tubas, the Jordan Valley of the occupied West Bank, Hebron, and several other areas. Palestinians are often forced to abandon their homes to make way for the training sessions.

Israeli forces have killed 14 Palestinian children in the West Bank and Gaza Strip since the start of this year, according to a Palestinian statistics agency.

In a statement on Sunday, the Palestinian Central Bureau of Statistics (PCBS) said Israeli forces had killed 35 children in 2016.

“Some 300 Palestinian children are still held in Israeli prisons,” added the statement, which was issued to mark the Universal Children’s Day.

The Ramallah-based organisation said that around 4,000 children had been detained by Israeli forces since October 2015, most of whom had been released.

The statement said around 848 children had been displaced due to Israeli demolition of Palestinian homes.

According to the agency, Israeli authorities had demolished 418 homes and 646 establishments in 2016. There was no Israeli comment on the report.

The Universal Children’s Day is celebrated on November 20th each year to promote international togetherness, awareness among children worldwide, and improving children’s welfare.

Children make up around 46 percent of the 4.5 million Palestinian population in the West Bank and Gaza Strip.

Israeli occupation forces have arrested 483 Palestinian children since the start of 2017, the Prisoners and Freed Prisoners Committee announced yesterday.

Quds Press reported the official Palestinian rights groups saying that the Israeli occupation locked up a number of these children in Ofer Military Prison under administrative detention.

The lawyer of the rights group Louai Al-Mansi said “40 Palestinian children were arrested in October”; eight of them were tortured.

Al-Mansi said that one child was arrested after he was shot and wounded by Israeli occupation forces.

The children range in age from 13-17 years old, he explained.

The figures, which were released to mark Universal Children’s Day, also highlighted that the number included ten girls in jail and approximately 100 Palestinian children currently under house arrest.

Head of the PPC Qadura Fares said: “Israel has arrested no less than 7,000 Palestinian children between the ages of 12 and 18 since the start of the Second Intifada in 2000.”

Fares also said that many of the children were arrested below the legal age and they became 18 while in Israeli prisons.

Since the start of the Jerusalem Intifada in October 2015, he said, the number of Palestinian children inside Israeli jails increased to the highest number since February 2009, noting that 400 have been held on numerous occasions.

He revealed that 116 of the Palestinian children currently inside Israeli jails are between 12 and 15 years old, noting this is the highest number since January 2008, the year when the Israeli prison service started to give details about imprisoned children.

After 2015, the Israeli occupation approved several racist laws against Palestinian children, including laws that stipulate sentencing children to long terms in prison – sometimes, according to Quds Press, to ten years or life sentence.