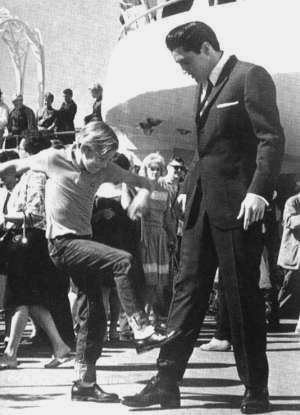 muhaski: Kurt Russell began his film career at the age of 10 in an uncredited part as in Elvis Presley’s It Happened At The World’s Fair. A favorite scene in the movie is when a ten-year-old Kurt Russell is paid by Elvis’ character to kick him in the shins

… must have kicked him in the shins too.

Previous Post: « The Empire State Building as seen from New Jersey in 1941
Next Post: In 1935 Kay Petre took the ladies land speed record at 134.75 mph in the 1924 Delage, a 10.5 litre V12-engine Land Speed Record car she had been racing against the men. Due to her size, Kay needed large wooden blocks strapped to the pedals to allow her to operate them. »