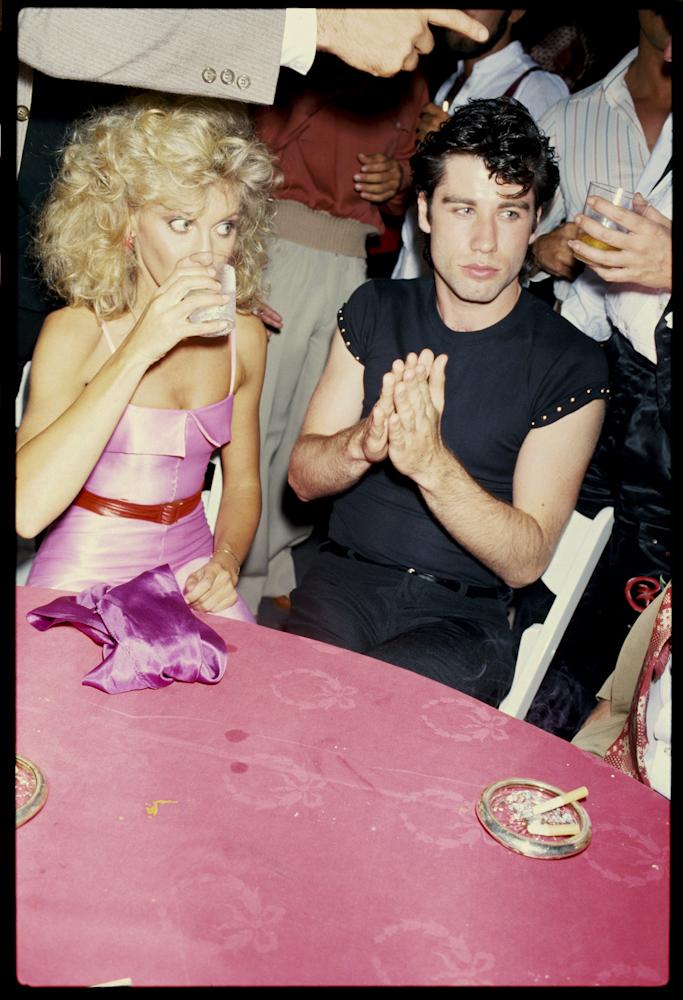 Olivia Newton-John on Grease with John Travolta: ‘At 29, was I too old to play a high-school girl?’

This is John Travolta and me after the New York premiere of Grease. I had arrived in a cute little prom dress, then for the after-show party I changed into this pink spandex outfit to reflect the way Sandy, my character, changed her image during the film. There were huge crowds. The movie wasn’t out yet, but already there was a lot of excitement about the launch.

I was very nervous about making the film, because I was an Australian, but they said, ‘That’s OK, you can do an Australian accent.’

I worried that at 29 I was too old to play a high-school girl. But John was charming and really wanted me to do it, and that was one of the deciding factors. He’s a lovely man – we became great friends and he was very helpful to me on set, as I was not an experienced actress.

We shot the film at a real school in California, and it was like going back to high school – although it was like nothing I’d experienced, because I went to a very strict school in Australia where the boys and girls had separate stairs and we had uniforms.

Everything about making the film was fun, but if I had to pick a favourite moment, it was the transformation from what I call Sandy 1 to Sandy 2. I got to play a different character and wear different clothes, and when I put on that tight black outfit to sing You’re the One That I Want, I got a very different reaction from the guys on the set.

When I put on that tight black outfit to sing You’re the One That I Want, I got a very different reaction from the guys on the set
That was a turning point for my singing career. It showed I could do different things. Before Grease, I’d been singing my country songs and afterwards I got to do more pop things, like Physical.

The film was huge when it opened, but none of us could have predicted we’d still be talking about it more than 30 years later. I get women saying, ‘Oh, I used to be you, standing in front of the mirror with a hairbrush, singing those songs.’ And the amazing thing is, it’s still finding new fans. I have little girls come to my show wearing Pink Ladies jackets. They’re nine or 10 years old and they’ve just discovered it, which is wonderful.

John and I have stayed in touch, and in 2012 we made a Christmas album and sang a duet called I Think You Might Like It, which was a sort of sequel to You’re the One That I Want by the same writer, John Farrar.

We made a video with a 1950s Thunderbird, and wore similar outfits to Grease as a homage to a wonderful time in our lives.

Previous Post: « “Your vote does not guarantee you a right to win.” Eric Von Haessler
Next Post: “Every mushroom is edible, but some only once.” Unknown »