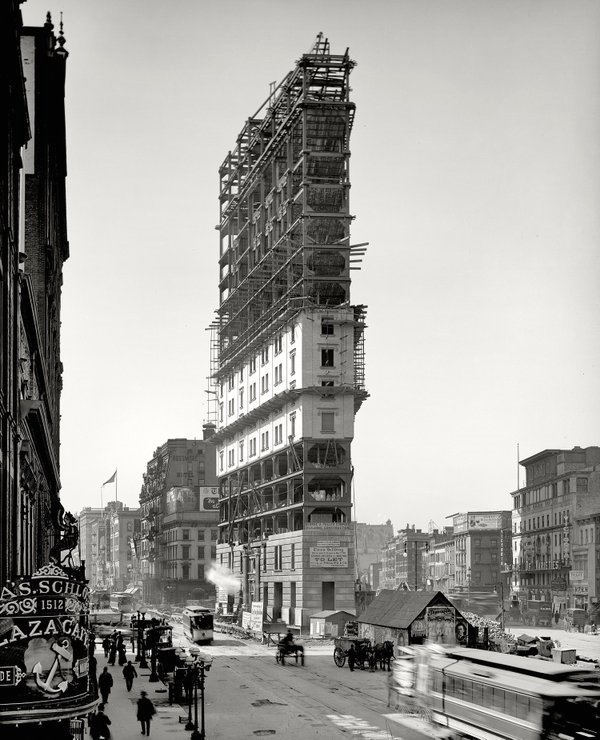 17Days17LongNights: Who would’ve imagine that a hundred years later it would become Starbucks central.

pvs_pvs: Times square is a major commercial intersection in central Manhattan at the junction of Broadway and Seventh Avenue. It acquired its name in 1904 when Albert Ochs, publisher of The New York Times, moved the newspaper’s headquarters to a new skyscraper on what was then known as Longacre Square. The name stuck, even after The New York Times moved across Broadway in 1913. Now known worldwide as a symbol of the American spirit, Times Square is home to many popular Manhattan attractions, including Hard Rock Cafe, Madame Tussauds Wax Museum, and ABC’s Times Square Studios.

Longacre Square started with a few brownstones built by a developer who saw potential for a new “uptown” neighborhood. Following the area’s development, people moved to the square in droves, and with them came brothels, pickpockets, and streetwalkers. Soon, in a foreshadowing of its later fate, the area turned into a veritable red-light district. In 1895, Longacre Square had a new tenant, Oscar Hammerstein I, who developed a large entertainment complex in the hopes of rekindling an interest in opera. This complex, called the Olympia, occupied a full block on 42nd Street and featured three theaters.

During this time, many new theaters opened on the Great White Way, so named for Broadway’s famous light show. The vaudeville circuit found success along with legitimate theater. In 1904, The New York Times held a New Year’s Eve event to celebrate their relocation to Longacre Square. Their building was then the second tallest in Manhattan and became the symbol for a new, vibrant era. Every year since this first celebration, millions of people have gathered for the well-known and much anticipated ball drop ceremony.

Previous Post: « A girl sits outside the rubble of her bombed home, photo was taken in London in 1940
Next Post: “In strange and uncertain times such as those we are living in, sometimes a reasonable person might despair. But hope is unreasonable and love is greater even than this. May we trust the inexpressible benevolence of the creative impulse.” Robert Fripp »