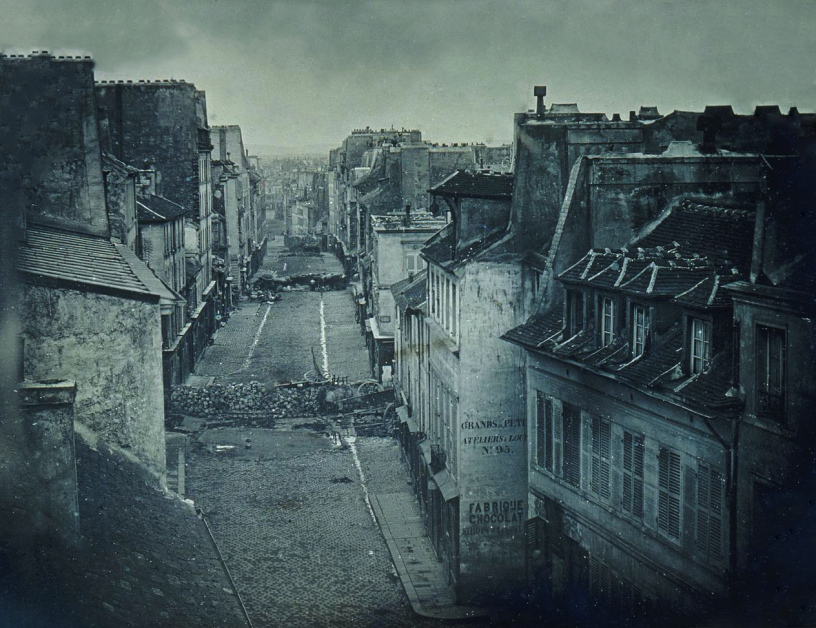 >This interesting and ominous shot was taken on the Rue Saint-Maur in Paris on June 25, 1848, in the midst of what’s known as the “June Days” Uprising. The lines of junk you see blocking the streets are barricades that were hastily constructed by revolutionaries, mostly unemployed men seeking work, a few days earlier. The street is deserted and given the date my guess is that this was taken right after the uprising was put down by French Army soldiers. There are no bodies visible–they must have been cleared away before this Daguerreotype was taken–but the June Days was a very bloody affair, killing perhaps 10,000 people in three hellish days of savage urban rioting in the heart of Paris.

fan_of_the_pikachu: It’s fascinating that we have photographs of the Springtime of Nations. There’s a photo of a Chartist meeting in the same year too.

I would love to see a picture taken from the same spot today.

jacdelad: Well, the French don’t sh– around with their uprisings and revolutions…

Previous Post: « Iran Accuses Foreign Enemies of Sponsoring Violent Protests—Just Like The CIA Did in 1953
Next Post: POTUS – The President of the United States of America »