In an interview with Internet broadcast 9/11 Free Fall, the son of the late Carl Sagan claimed that there is a massive conspiracy to “cover up” evidence that the collapse of the World Trade Center tower in 2001 was an inside a job.

The interview was highlighted earlier. 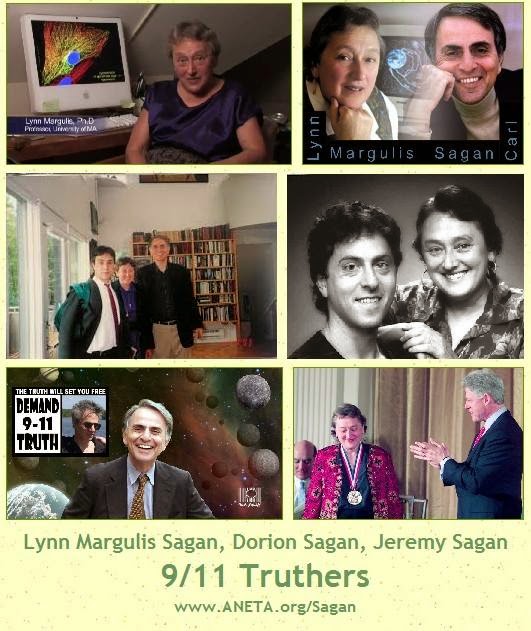 Jeremy Sagan, the son of Sagan and his first wife, biologist Lynn Margulis, told Free Fall host Andrew Steele that he grew more suspicious about the collapse after watching video at a friend’s house, months after the attack that killed almost 2,700 people in New York City that day.

“Well, on first seeing it— I mean anyone seeing it can see that there’s something suspicious about it. I remember and –I think it was New Year’s 2002, I was at a friend’s house, you know, and some parents of another friends, and they were saying Bush could never do something like this because he was incompetent. But in retrospect, now that I think about it, it’s true,” Sagan explained. “I don’t think Bush could really do it, but that’s why they had him skirted off into Florida, to, you know, get him a bit out of the way. In retrospect, you look at that and its obvious it was a controlled demolition.”

Asked by Steele, who said he himself relies upon “instinctive evidence,” with regard to 9/11 how he came to his conclusions, Sagan said he was basing it upon “visual evidence.”

Report Advertisement
“I think the visual evidence is the most compelling. I mean you have like falling, free fall. You have molten steel coming out of the building. I mean, obviously, also — the evidence of thermite is very compelling,” he explained. “The other thing I should say, if you look at building seven, the way everything was known before it happened. And the way it was reported in the media before it happened, that doesn’t happen. [laughs] You know?”

Sagan, who is a computer programmer, lamented the fact that not all computer model data on the collapse has been released to the public due to public safety concerns.

“I think public safety is in quotes — referring to their own behinds.” He stated. “The fact that they won’t release it is just proof, because science is peer-reviewed and all the data is made available so everyone can come to a consensus, and that’s what moves us along.”

“It’s a cover-up, basically,” he continued. “I mean, you can’t release data that is going to show you are wrong. Why would you do it?”

Sagan also referenced his late mother, Lynn Margulis, who was married to his father from 1957 to 1965, who told Scientists for 9/11 Truth that she felt the 9/11 Commission was “a fraud.”

“Certainly, 19 young Arab men and a man in a cave 7,000 miles away, no matter the level of their anger, could not have masterminded and carried out 9/11: the most effective television commercial in the history of Western civilization.” Margulis said. “I suggest that those of us aware and concerned demand that the glaringly erroneous official account of 9/11 be dismissed as a fraud and a new, thorough, and impartial investigation be undertaken.”

Sagan also admitted that he isn’t entirely comfortable talking about his beliefs outside of “9/11 conventions”, saying, “most people are believers in the official story,” before adding that people are afraid to talk about it because “they have a nationalism.”

Listen to the interview below, uploaded to YouTube by Free Fall:

fromskintoliquid: Brian O’ Leary has had some not so fantastic things to say about Sagan when he worked with him in the 60’s and 70’s. Apparently, and O ‘Leary was not the first to remark this – but Sagan was a staunch advocate for not disclosing the existence of aliens to the public. He worked in numerous capacities explicitly pushing a non-disclosure agenda.

suprfli: What is the theory on why WTC 7 was taken down? I’ve read something about important documents in the building, documents that had records on foreign affairs and foreign money, etc. What was in WTC 7?

The_Golfmaster: Sagan was a CIA shill, guy completely changed his narrative and started professing the exact opposite after the deep state got to him.

CaptainApollyon: He probably knew physics was a joke

Rockran: >Asked by Steele, who said he himself relies upon “instinctive evidence,” with regard to 9/11 how he came to his conclusions, Sagan said he was basing it upon “visual evidence.”

Carl would not approve.

>“The other thing I should say, if you look at building seven, the way everything was known before it happened. And the way it was reported in the media before it happened, that doesn’t happen. [laughs] You know?”

Except that kind of thing does happen.

Missing nuke could be used in a 9/11 style false flag attack to kick off a war with North Korea.

“In 2007, someone in an irregular chain of Air Force command authorized the loading and transport of nuclear weapons from Minot, ND to Barksdale, LA. These weapons were unaccounted for from 10-36 hours.”

“Several military personnel died under mysterious circumstances shortly before and after the incident. There are now questions regarding the fate of these individuals in the U.S. Air Force who could have had relationships in one way or another to the incident or possibly have been directly involved.”

“The problem with this explanation for the first reported case of nukes being removed from a weapons bunker without authorization in 50 years of nuclear weapons, is that those warheads, and all nuclear warheads in the US stockpile, are supposedly protected against unauthorized transport or removal from bunkers by electronic antitheft systems-automated alarms similar to those used by department stores to prevent theft, and even anti-motion sensors that go off if a weapon is touched or approached without authorization.”

“While the Air Force report doesn’t mention any of this, what it means is that if weapons in a storage bunker are protected against unauthorized removal, someone-and actually at least two people, since it’s long been a basic part of nuclear security that every action involving a nuclear weapon has to be done by two people working in tandem-had to deliberately and consciously disable those alarms.”

“Since the Air Force report does not explain how this hurdle to unauthorized removal of the six nukes could have been surmounted by “mistake,” the report has to be considered a whitewash, at best, or a cover-up.”

BlueLaceSensor128: Is it missing? From what I read the incident seems to have been that live missiles were loaded and moved to another base when they should have been dummies, not that one was stolen.

Known_and_Forgotten: Does anyone else remember the DoD audit that revealed $2.3 trillion missing that happened prior to 9/11? Well guess what’s happening again….

showmeurboobsplznthx: 17 nukes were taken from the Turkish military base. We also lost 3 in Bulgaria during the Ukraine uprising

TokingMessiah: If you read the [actualy story](https://en.wikipedia.org/wiki/2007_United_States_Air_Force_nuclear_weapons_incident) it’s much less fishy then you think.

People were forced to resign, generals were disciplined and policies were completely changed.

TheWebOfSlime: Imagine, for a moment, that the greatest secret is that nuclear weapons don’t actually work. Killing people trying to expose that secret or recovering fake nukes to avoid scrutiny would be the utmost priority of such a machine.

Compartmentalized, no one actually knows every piece of the bomb. So, only a few people could hold the secret while everyone else just thought they were protecting state secrets.

With tritium’s half life being only 12 years, imagine that, after 6, a warhead isn’t reliably operational, anymore. That means 6,000 nuclear weapons would have to be updated every 6 years.

What if North Korea was faking their abilities?

What if everyone was?

dankmanstan: I think Directed Energy Weapons will be used, Nuke’s are old news compared to some of the tech at there disposal

ASaDouche: A FF isnt needed to start a war with NK. Them shooting rockets over Japan is more than enough justification.

UncleSnake3301: I actually worked in the ICBM System Program Office at the time this tomfoolery went down. Every military member I worked with had many many years in the nuclear weapons field and everyone was dumbfounded as to how this actually happened. It is exceedingly easy to tell the difference between a dummy missile and the real deal.

If we are to believe this story, then we’re supposed to buy that the crew chiefs, weapons loaders, pilots and God knows who else all neglected to point out that they had live fucking nukes under their plane?

This one has bugged me like crazy since it happened. Something very very fishy went down that day.

jonestony710: The war isn’t going to be with NK, that’s just smoke screens. It’ll be with Iran, and it will be disastrous.

beleroy: what’s ‘funny’ (sic) is that 9/11 false flag was already a nuclear attack..

Remember 9/11 JapAnon? Here is a collage with some of his posts. If this is a LARP, it’s very well done. 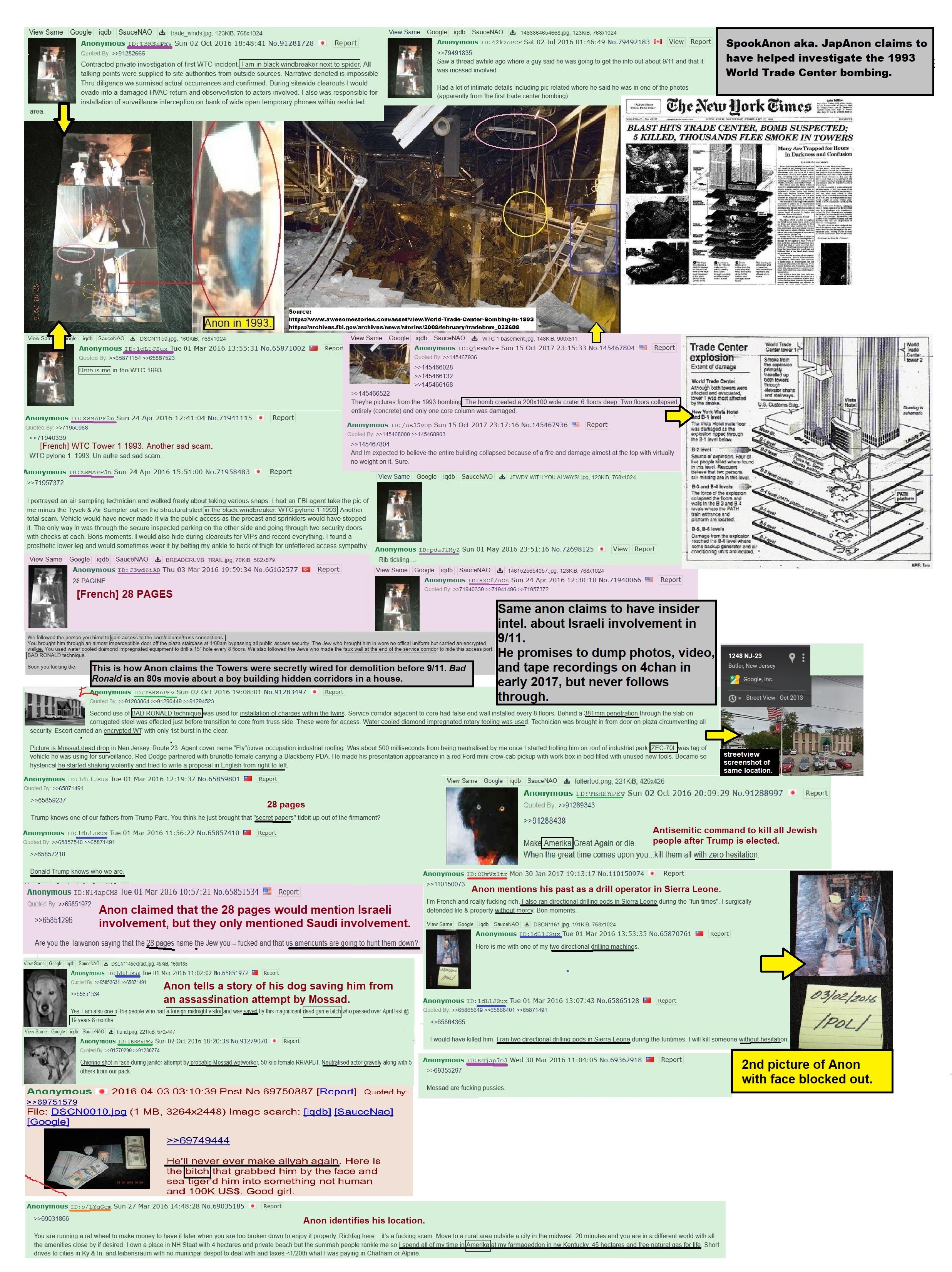 Previous Post: « 2,800 CLASSIFIED Emails Superleak – Anthony Weiner, Huma Abedin, Hillary Clinton, etc
Next Post: Paratroopers of the 82nd Airborne Division advance in a snowstorm behind a tank in a move to attack the village of Herresbach, Belgium, 28 December 1944 »