Someone Was Killed For Being A Source Of The Steele Dossier According To Glenn Simpson’s FUSION GPS testimony!

Edit: [Oleg Erovinkin](http://www.telegraph.co.uk/news/2017/01/27/mystery-death-ex-kgb-chief-linked-mi6-spys-dossier-donald-trump/), for those wondering. I for one will be watching which coverage mentions he’s a retired KGB general, and which glosses around it.

SuccessfulOperation: Senator Diane Feinstein just released Fusion GPS’s testimony. According to Glenn Simpson, a source in the Steele dossier was killed for being a source for Christoper Steele.

Its alleged this was the source https://en.wikipedia.org/wiki/Oleg_Erovinkin An attorney for the co-founder of opposition research firm Fusion GPS revealed during a closed-door interview this summer with congressional investigators that “somebody’s already been killed” as a result of the publication of the anti-Trump dossier.

If true someone is willing to murder over the free flow/restriction of information… a big conspiracy.

piles_of_SSRIs: The first and certainly not last.

The Fusion GPS Transcripts Are Being Released 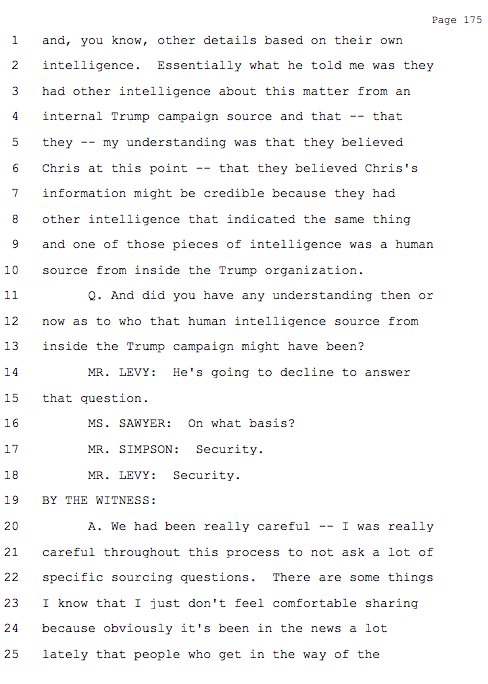 sinedup4thiscomment: Let’s get them IDGAF. To be honest the world could use more transparency in all corners. My only issue with how HRC and DJT were treated in this last election was that we haven’t been giving the same treatment and scrutiny to everyone running for office. Tear the fucking elite class apart, open every window, grasp at every thread. I have no doubt that skeletons are buried in all of their figurative walls, so let’s bring to light all of the evil in our society-bring justice to the wrong doers, and fix the systematic problems that reinforce this corruption and sociopathy.

Senate Judiciary committee (Feinstein) releases full testimony of Fusion GPS on the Steele Dossier, et al. Highly relevant to this subreddit as some in the govt seek to suppress this information from public view. Unsure if this will have any groundbreaking information, but it will shed light on who/what/why the dossier was made (Sources, motives, funding, etc. are all topics)

>Q. And with specific regard to the issue of blackmail, what was the — what were the facts that he had gathered that made him concerned about the possibility of blackmail and who did he think was going to be blackmailed?

>A. Well, the facts are — beyond what’s here I don’t have any additional facts. The alleged incident that’s described here is the one that he was referring to. As I say, I don’t have really any additional information beyond this except that — I mean, **it’s probably in here somewhere actually, but it’s well known in intelligence circles that the Russians have cameras in all the luxury hotel rooms and there are memoirs written about this by former Russian intelligence agents I could quote you**. So the problem of kompromat and kompromating is just endemic to east-west intelligence work. So that’s what I’m referring to. That’s what he’s referring to.

RedPillFiend: More about Trump and Felix Sater. One of the first names mentioned in the transcript..

“Portions of Trump’s relationship with Felix Sater, a convicted felon and government informant, have been previously known. Trump worked with the company where Sater was an executive, Bayrock Group LLC, after it rented office space from the Trump Organization as early as 2003. Sater’s criminal history was effectively unknown to the public at the time, because a judge kept the relevant court records secret and Sater altered his name. When Sater’s criminal past and Mafia links came to light in 2007, Trump distanced himself from Sater.

But less than three years later, Trump renewed his ties with Sater. Sater presented business cards describing himself as a senior adviser to Donald Trump, and he had an office on the same floor as Trump’s own office in New York’s Trump Tower, The Associated Press learned through interviews and court records.”

JoeyBulgaria: > >On October 31st the New York Times posed a story saying that the FBI is investigating Trump and found no connections to Russia and, you know, it was a real Halloween special.

>Sometime thereafter the FBI — I understand Chris severed his relationship with the FBI out of concern that he didn’t know what was happening inside the FBI and there was a concern that the FBI was being manipulated for political ends by the Trump people and that we didn’t really understand what was going on. So he stopped dealing with them.

This is one of the most underreported parts of this whole conspiracy – the plot within the FBI (Specifically the NY office) to conspire to help Trump win. This was achieved by coercing Comey to reopen the Clinton email investigation based on new info he felt was “sure to leak”

The means of leaking this? TruePundit, a news site specifically created to serve a pro-Trump purpose

TruePundit is fake news and is the source of a lot of right-wing propaganda such as [the claim that Hillary wanted to drone Assange](http://www.washingtonexaminer.com/wikileaks-cites-report-saying-clinton-mulled-killing-assange-with-drones/article/2603430). They worked directly with the Trump Campaign and the website itself is central to an obstruction of justice plot within the wider scope of the Trump/Russia investigation.

tefvik_arif: > A. Another figure involved in the Trump Soho project was a central Asian person named Arif, A-R-I-F, is the last name. The first name is generally spelled Tevfik, it’s T-E-V-F-I-K. If you search under a different transiteration of that name you can find open source reporting alleging that he’s an organized crime figure from Central Asia and **he had an arrest for involvement in CHILD PROSTITUTION**.

Huh, you would think there would be all over someone arrested for child prostitution.

I’ve done extensive research on Tevfik Arif, child prostitution is not the only thing he is involved in. If you want to see more about Arif, please see my [research thread](https://www.reddit.com/r/conspiracy/comments/6sxfzk/trump_soho_a_criminal_conspiracy_involving/). It goes more into Felix Sater and the Kazak money that the Trump Org deals with.

RedPillFiend: I’m pretty sure this is the article he’s referring to in the transcript that he wrote about lobbyists and Russia if anyone is interested.

A number of notable Washington insiders are earning big fees these days by representing controversial clients from the former Soviet Union.

From prominent businessmen — some facing criminal allegations — to top politicians, well-known ex-Soviets are lining up to hire help with criminal cases, lobbying and consulting. These figures, many of whom made fortunes in the wide-open 1990s amid the Soviet Union’s disintegration, hire Washington insiders to help rehabilitate their reputations in the West or to persuade investors and regulators they are committed to good corporate governance. 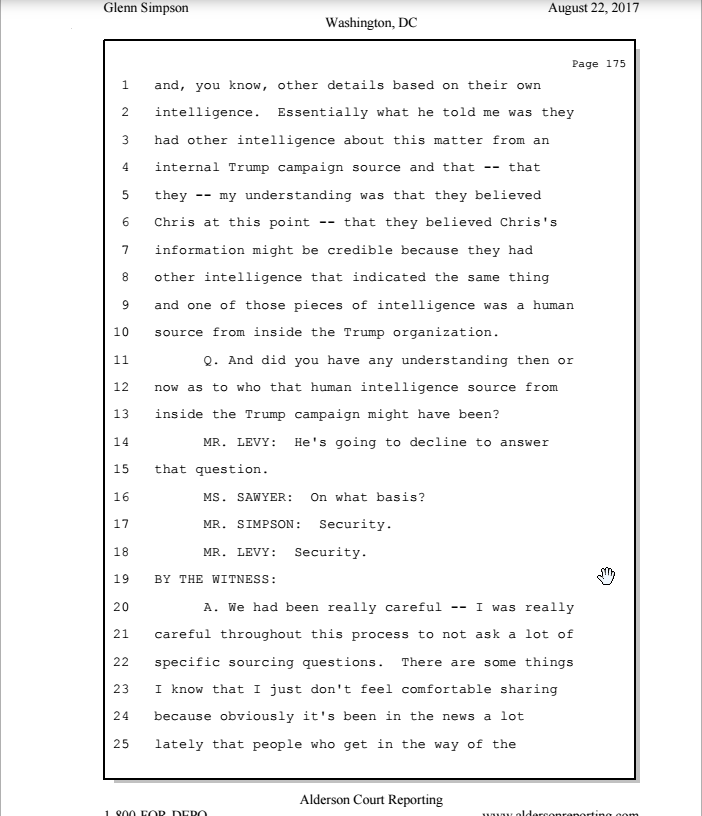 In the Fusion GPS testimony that was released, buried in the middle of the report was the statement that the FBI found Steele’s reports credible, because someone in the Trump campaign or organization was independently feeding the FBI intelligence. This has been overshadowed by vague accusations that a source of the dossier was killed.

Correction. Per Fusion GPS testimony, Steele called the FBI in July, and went to Rome in September.

RedPillFiend: I find it interesting that they gave the dossier to the FBI in July 2016, but redacted the name of who it was given to.

But then a page and a half later when asked what concrete steps they might have taken after receiving it, Simpson says “I do know that in Comey’s testimony he said..” Then stops himself and says he doesn’t know.

So was the dossier given to Comey???

canitbe73: I believe this is referencing Papadopoulos, specifically his drunken admission to the Australians.

Edit: Apparently Fusion GPS has clarified that this was [a reference to Papadopoulos.](https://www.washingtonpost.com/news/politics/wp/2018/01/09/who-is-the-trump-linked-source-who-led-the-fbi-to-treat-the-dossier-seriously/?utm_term=.c4b4f771d63b)

After [promising his constituents that he would relase the transcripts](https://youtu.be/AGAH7GFOIbI?t=18m18s), Grassley has now gone back on his word. He is abusing his power as Committee Chairs to attempt cover-up the Trump-Russia conspiracy.

If the Steele Dossier, is only a “4chan LARP”, how has “Somebody’s already been killed as a result of the publication of this dossier”?

Search this sub for “GPS Fusion”, and the #1 result, the most upvoted result is this one:“Reminder: 4chan Autists Created Fake Piss Dossier”

If the wisdom of the crowd is that the dossier is fake, how does the crowd square this circle from the testimony?

MR. FOSTER: So without getting into naming the sources or anything like that, what steps did you take to try to verify their credibility?

MR. SIMPSON: I’m going to decline to answer that.

MR. LEVY: It’s a voluntary interview, and in addition to that he wants to be very careful to protect his sources. Somebody’s already been killed as a result of the publication of this dossier and no harm should come to anybody related to this honest work.

Previous Post: « “Bro, my dad arranged a $20 billion deal and you can’t spot me 400 shekels?” — Yair Netanyahu caught on audio, asking for money to pay a stripper. Corruption is a family affair in the Netanyahu family
Next Post: The Vegas Shooting Conspiracy »