This is the conspiracy, folks. 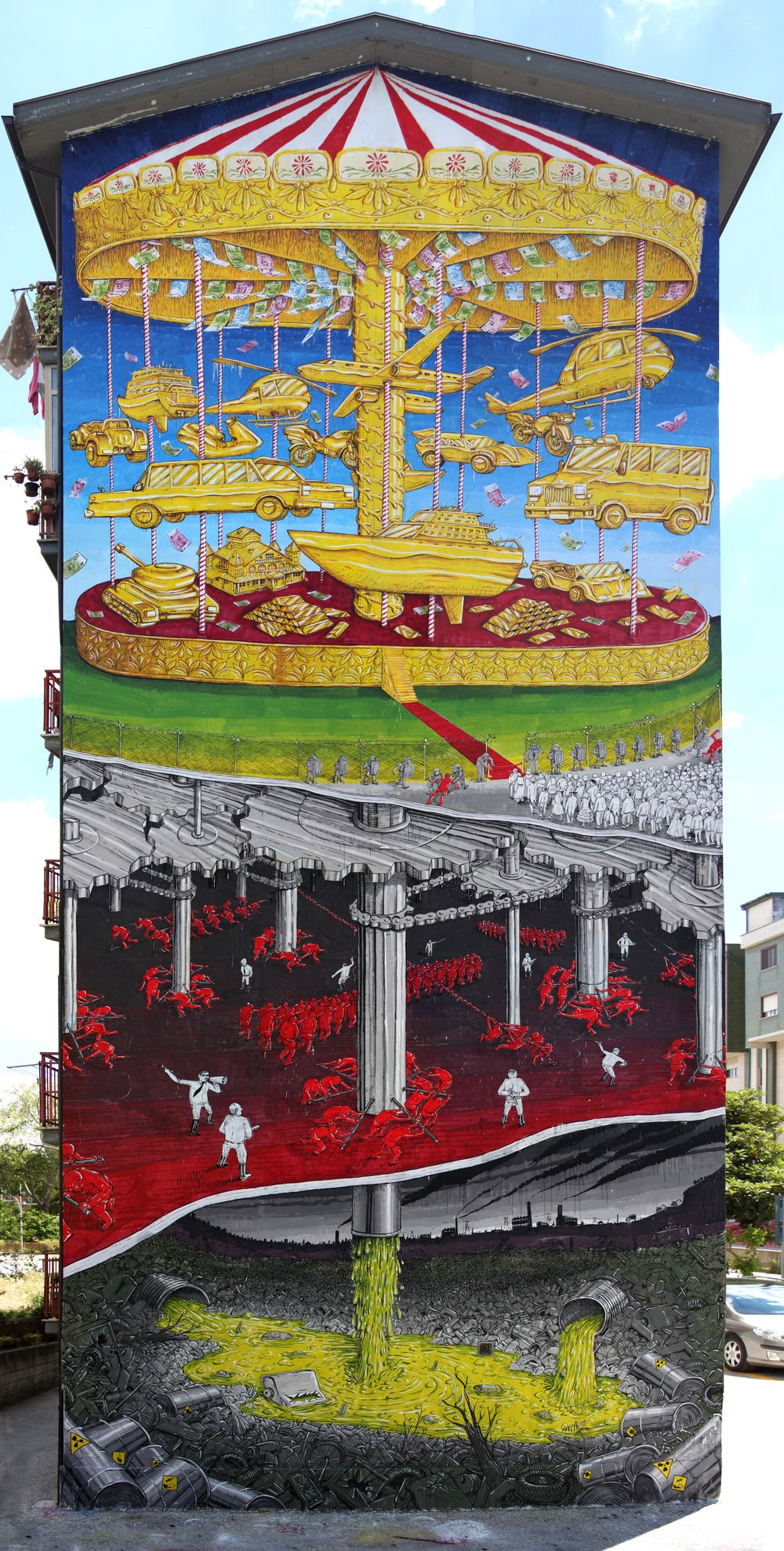 ElfenGried: Always so strange to me how, when working people look at things like this ***they get it***. 75% upvoted as of this writing. Even if people don’t put it in the same terms, everyone understands the struggle depicted here, as if they’ve felt this same sense of privation in their own lives.

But when you put it in terms like capitalism, socialism, worker ownership, etc., people flock to defend the very system which creates these conditions! Even when their big concern is government overreach, and you posit a socialist ideology which has no central state… almost like an emotional reaction contradicting the other emotional reaction when they think of their lives as workers upon viewing this art. Hmmm.

T0mThomas: I don’t get it. Who’s lining up to ride the ride? People that are done their shift toiling below? Cause that’s how the *real* world works, which means you’re also part of the problem, aren’t you?

Unless you live in the forest. Since you have internet I’ll assume you don’t.

You’re literally being poisoned to save a few corporate bucks. Video contains examples of contaminated food, toys, makeup, cookware, and toiletries. Pay now or pay later, the choice is yours.

Submission statement:
Hello everyone. I beg you to watch this video. The mainstream media isn’t telling you that 1/3 of the products you buy are contaminated. What do you think their corporate sponsors would do about a news story that showed how the advertiser’s products were slowly destroying their bodies? Withdrawal funding maybe?

It’s extremely important we spread this information ourselves because the corporate media whores are allowing this to happen.

dj10show: I listened to a podcast on my drive to NYC that covered parabens, estrogen, and other compounds that were in our water supply, lotions, colognes, fragrances that act as estrogen in your body. It causes a feminization of males and early puberty in women. Which is basically what I’m seeing in society as I get older. Do we just not study this stuff before we put it in consumable products, or do they know and are intentionally trying to poison us?

Kendle_C: The Prophet with the Golden Snot Drip. I question what kind of audience will believe with such a spokesmodel. This is an ad hominem fallacy, I know, but the nose, the threadbare jacket, too little energy to flip your hoody back, sitting in the dark trailer Unibomber style, it’s not working for my demographic AT ALL.

If you want message penetration, lose the nose ring, clean up the act.

Having said that they *really are trying to kill us.*

jerkedit: Wow. If ‘we’ are being poisoned, imagine what they are doing to their citizens in the communist countries where life expectancy is much, much lower. I mean my grandma just turned 94, and she is starting to look a little poisoned…. Previous Post: « A picture capturing the moment that the tallest member of the German army surrendered to a diminutive Allied soldier, Normandy 1944
Next Post: Albert Einstein teaching at Lincoln, the United State’s first Historical Black University, 1946 »