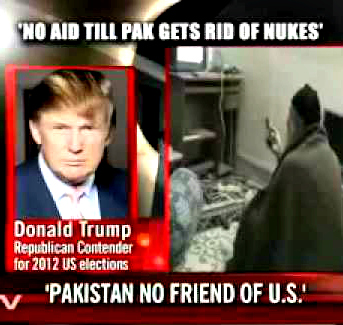 When President Trump decided to start the new year off with an explosive tweet attacking Pakistan, he touched a nerve in the South Asian nation that required a quick comeback.

Trump woke up New Year’s morning in Mar-a-Lago and immediately sent out this invective-filled foreign policy change via Twitter.

The United States has foolishly given Pakistan more than 33 billion dollars in aid over the last 15 years, and they have given us nothing but lies & deceit, thinking of our leaders as fools. They give safe haven to the terrorists we hunt in Afghanistan, with little help. No more!

While the U.S. government’s relationship with Pakistan has been long and complicated, the Islamic-majority country formed out of the partition of British colonial India into separate Hindu and Muslim nations has been a regional ally since the days of the cold war when America found Pakistan useful to counterbalance Soviet influence in the region.

With Pakistan being one of the few nuclear-armed countries in the world, like its immediate neighbors India and China, the U.S. has always been careful in its relations with the country with a policy of preserving the delicate balance of power in the subcontinent. During the Soviet war in Afghanistan, Pakistan played a crucial role in helping the U.S. fight a proxy war by assisting America in arming and training Islamic fighters some of whom later banded together to form the Taliban.

Of course, Pakistan has also been the country where Osama Bin Laden hid in plain sight for years with what many Americans saw as the complicity of the Pakistani government, and Trump’s claims of it being a terrorist safe haven are difficult to deny, although whether through the active participation of the government or through a simple failure to devote resources to a crackdown is debatable.

The Pakistani government responded to Trump’s rant with their own perspective on the relationship with America. Tellingly, it came not from the diplomatic branch of the government, but directly from the Defense Ministry’s Twitter account.

Pak as anti-terror ally has given free to US: land & air communication, military bases & intel cooperation that decimated Al-Qaeda over last 16yrs, but they have given us nothing but invective & mistrust. They overlook cross-border safe havens of terrorists who murder Pakistanis.

As with most situations, there are two sides to every story. Whatever President Trump’s reasons for suddenly turning his attention to Pakistan, his bull-in-a-China-shop approach to diplomatic relations is not likely to produce the predictable outcome that experienced statesmen prefer to the chaotic results that can emerge from thoughtless and unprovoked bullying. After all, the purpose of diplomacy is to improve relations between countries, not destroy them.

The president has started off the new year in his own inimitable fashion. Diplomacy, according to Donald Trump, is something conducted in the middle of the night through social media with no consideration of future implications. 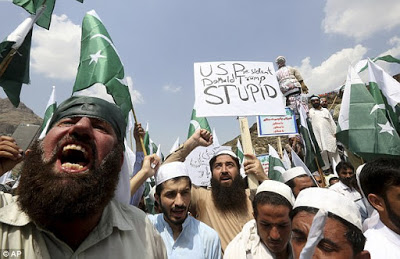 That’s why today, out of the blue, the president decided to tweet about Pakistan, citing U.S. aid to the country as a point of contention, because of the “lies and deceit” we’ve received in return. While American-Pakistani relations are a valid area of concern and there is much that can be done, an early morning tweet is hardly the best way to fix the extant problems.

The question is does he not realize how useless his behavior is, or does he simply not care? One tends to lean towards the latter increasingly.

It’s hard to overemphasize how uniquely unfit for office Donald Trump is at moments like this. International diplomacy is a careful art, one which people study to master their entire lives. The problem is that Trump is a man who’s never had to consider something seriously his entire life, and now he’s the single person responsible for the world’s most important considerations. It’s a nightmarish pairing.

But he wasn’t done there. Trump decided Twitter was also the means by which he would resolve American-Iranian relations, while also taking a shot at President Obama. With the eyes of the world on the Persian nation, the president of the United States concocted a message: “TIME FOR CHANGE.” How that change will occur, and what kind of change it will be are specifications better left to other men apparently. Trump tweeted:

What a year it’s been, and we’re just getting started. Together, we are MAKING AMERICA GREAT AGAIN! Happy New Year!! pic.twitter.com/qsMNyN1UJG

Iran is failing at every level despite the terrible deal made with them by the Obama Administration. The great Iranian people have been repressed for many years. They are hungry for food & for freedom. Along with human rights, the wealth of Iran is being looted. TIME FOR CHANGE!

The new year is off to a Trumpian start. Let’s hope it has better things in store than 2017.

Previous Post: « Iran is destined to be wiped out (by USA/Israel)?
Next Post: Why, of course, the people don’t want war… Hermann Goering Final Speech at the Nuremberg Trials »