Is this a conspiracy to nail Trump? 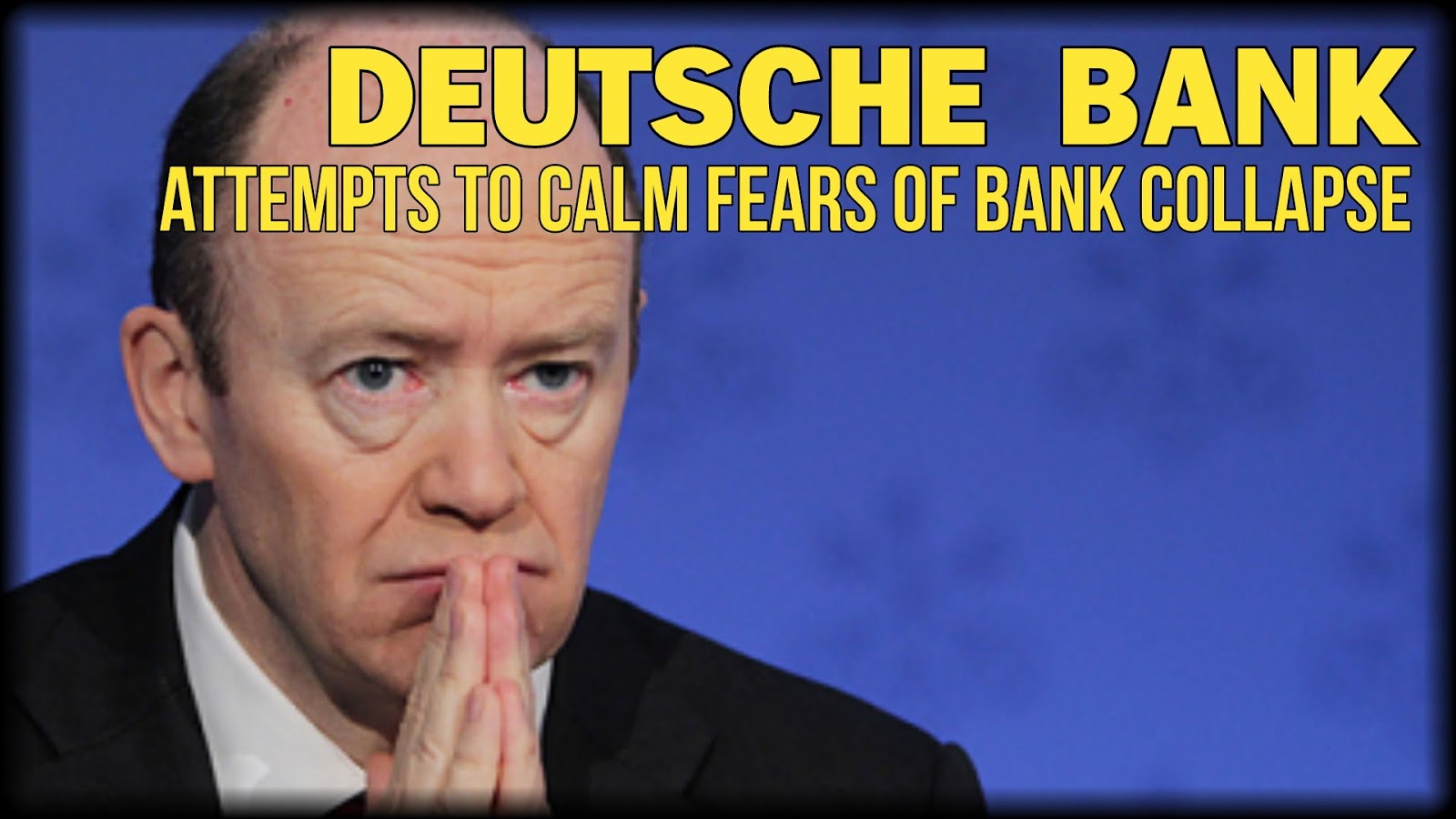 Rumor from a don who has about 30 years of dealing with the subject matter –  Russia was bankrolling and bailing him out of bankruptcy through Deutsche Bank, that Russia has been providing Deutsche Bank with the hedging instruments so they undertake the defaults instead of the Bank.

Deutsche Bank is notorious for giving loans to people who can’t afford them granted they have a powerful anonymous third party who will allow them to hedge against them via credit default swap. Trump has defaulted on Deutsche Bank like 3 times but they’ve never stopped giving him loans.

The Frankfurt headquarters of Deutsche Bank have been raided by prosecutors in a money laundering investigation.

Police cars were seen outside the tower blocks that house the headquarters of Germany’s biggest bank.

Five other Deutsche offices in the city were searched in an operation involving about 170 police and officials.

Prosecutors are looking into whether Deutsche Bank staff helped clients set up offshore accounts to “transfer money from criminal activities”.

The investigation, which began in August, focuses on activities between 2013 and the start of 2018.

In 2016 alone, more than 900 customers were served by a Deutsche Bank subsidiary registered in the British Virgin Islands, generating a volume of €311m, the prosecutors allege.

The investigation was sparked by revelations in the 2016 “Panama Papers” – an enormous amount of information leaked from a Panamanian law firm called Mossack Fonseca… More here.

Basel. Have we forgotten Basel?

The FBI raided the offices in Chicago of one of President Donald Trump’s former attorneys, Edward Burke, who is a member of the city council. Burke’s small firm represented Trump in Chicago over tax matters, obtaining $14 million in relief from property tax assessments over 12 years on the president’s flagship Trump Tower in that city.

Anyway, it’s said Trump is merely the tip of a corruption iceberg that has tendrils stretching to every government and “elite” family on the planet.

A hidden system of finance has been operating for generations, and an entire “Breakaway Civilization” has formed around it. And Deutsche Bank  is merely one player of many.

Financing a breakaway civilization: A series of scandals involving allegedly counterfeit “bearer bonds” make up the biggest and most under-reported financial story of the 21st century.

The following is absurdly long because it needs to be.

Although I’m including links to several different sources, including from “mainstream” as well as alternative media, the majority of the analysis I’m presenting here comes from the research of Joseph P. Farrell, a writer on topics like alternative archaeology, physics, technology, history, and other “strange stuff”. I’ve also made Joseph P. Farrell for some of his videos and blogs, many of which I will be quoting from in the following analysis.

To being with, here’s a brief overview of three essential methodological assumptions of any counterfeiting scheme:

Things change a bit when the target group is very wealthy, as securities (stocks, bonds, etc.) become the preferred method. Also, a wealthy target group is likely to be privy to the existence of instruments most don’t know exist, and can call upon private intelligence resources to verify information.

Before delving into the various bearer bonds scandals, it’s important to mentioned a very relevant historical antecedent to these recent events, namely an extraordinary undertaking carried out by Nazi Germany.

Operation Bernhard was the largest counterfeiting operation in history. Its goal was to replicate the paper of English notes, copy the printing plates to reproduce the tiniest detail, and employ mathematicians to work out the Bank of England’s numbering system.

Nazi Germany was trying to erect a hidden system of finance aimed at wrecking the British war economy…they were at war with the British financial elite. It’s important to note the connection between financial fraud and intelligence bureaucracies. The SS had essentially created a counterfeiting bureaucracy.

All in all, and these are generally considered to be the most conservative numbers, Operation Bernhard produced a total of 7 million facsimile British pound notes during the war, totally a staggering 135 million pounds. Other estimates range well over 300 million pounds.

Here are some important points about the implications of Operation Bernhard that are relevant to the rest of the discussion:

According to the research of Farrell, Richard Dolan and many others, industrial scale counterfeiting survived WWII to become the favored method of the independent financing of covert research and operations of what has become often referred to as a “breakaway civilization”. Operation Bernhard survived WWII, at least conceptually, as well as the accompanying Fascist ideology.

According to Farrell, the major factional structure of this breakaway civilization, as far as finances are concerned, are composed of the following:

To introduce the next section, here’s an excerpt from an article called Parallel World of Finances that continues to discuss the various incidents concerning bearer bonds:

The invisible financial world is something the majority of people have no idea of. The major part of it is the shadow sector of world financial system, financial institutes and financial operations conducted under the cover of off-shores and falling out of the sight of financial regulators (central banks, ministries of finances, and security and exchange commissions). One can only guess how large it is, there is no way to have a clear picture of what it is like because all the activities are conducted beyond any supervision. No books are kept, and no accounting before state structures exists.

The world dwellers are criminal gangs related to drug trafficking, arms trade, slave trade and so on. It’s not even grey sector activities, but rather “black” economy breaching all norms of penal law. According to experts, the turnover is a few trillion dollars a year…Besides, the shadow sector encompasses various structures that do not hide underground. Many of them openly offer various services to individuals and corporations.

A bearer bond is a debt security issued by a business entity, such as a corporation, or by a government. It differs from the more common types of investment securities in that it is unregistered–no records are kept of the owner, or the transactions involving ownership. Whoever physically holds the paper on which the bond is issued owns the instrument. This is useful for investors who wish to retain anonymity. Recovery of the value of a bearer bond in the event of its loss, theft, or destruction is usually impossible.

The first reported case of strangeness concerning the so-called “Morgenthau bonds” became public in 2003. Henry Morgenthau was the US Secretary of the Treasury during the 1930’s, when many of these bonds supposedly originated.

From a BBC article: Two men have been found guilty of conspiracy to defraud in a case related to fake US government bonds worth $2.5 trillion.

The individuals who were caught said the bonds were related to the “black gold” received from Chiang Kai-shek of China. The story hardly attracted any attention on the part of world media. The bonds were supposedly issued in 1934, a year that will continue to pop up. The word “dollar” was printed on the bonds instead of “dollars”. Glaring typos on these various bonds will become a common theme as we explore further.

The following article summarizes the implications of all these weird bond incidents: Secret “Occult Economy” Coming Out of the Shadows?

Yet, although the bonds/notes in the Halksworth case were demonstrably false, they did reveal some rather startling information, that fake bonds were often included amongst large quantities of real bonds so as to preclude the holder from ever being able to cash them.

Farrell continues with an analysis on this story here.

So, ye olde plotte thickens, for now we have the involvement of someone with expertise precisely in such bonds and their authentication, alleging that mistakes were deliberately made as “security devices” and that the CIA was involved in this, clearly implying a hidden economy connection.

Who wants to be a trillionare?

This story is significant enough to be mentioned on the Wikipedia page for bearer bonds:

In June 2009, Italian financial police and custom guards seized documents purporting to be U.S. bearer bonds, totaling $134.5 billion. The bonds were in $500 million and $1 billion denominations, although the highest denomination ever issued by the US Treasury was $1,000,000. It was unclear what the purpose of the fake bonds was; the two men carrying them were not detained after the bonds were seized.

Now if that doesn’t raise some questions…here are some more articles on the subject:

The following are from Farrell: The strange case of the Japanese Bearer Bonds

Update on the Japanese Bearer Bond story, with pictures of the bonds and “certificate of authenticity”

From the first of Farrell’s articles:

This is where the plot begins to thicken. For one thing, bonds of $500,000,000 denominations did not exist (so we’re told) in 1934, and thus they were deduced to be counterfeits, though, strangely, the Italian authorities at the time of the arrest were waiting for the US Securities and Exchange Commission to make a declaration as to their authenticity.

Moreover, we are informed by a number of internet articles and posts, Bloomberg for example, on this bizarre episode that the bonds were all so well-executed that they were “indistinguishable from the real ones.”

J.S. Kim, in his post on the subject “Strange Inconsistencies in the $134.5 Billion Bearer Bond Mystery,” asks a pertinent question: How can this quality be so good, and “yet the people involved in the alleged forgery be so ill-informed as not to date the bearer bonds with a more recent year that would not immediately identify them as fraudulent?”

The second problem, noted by Kim in his article, is that the $1,000,000,000 denominated “Kennedy bonds” were never known to exist at all. “This discovery defies any logical explanation. Why would expert counterfeiters make 249 bearer bonds with denominations of $500 million apiece, each indistinguishable from the real thing, and then instead of just making 20 more such bonds, decide to make 10 bonds in denominations of $1 billion apiece in a bearer bond design that never has existed? Were the alleged counterfeiters just too lazy to confirm if Kennedy bearer bonds were ever a legitimately issued security? Again, this story makes no sense.”

The number 134.5 billion should be eerily familiar as well: On March 30, 2009, the US Treasury Department stated that the Troubled Asset Relief Program had $134.5 billion remaining, the exact amount of the “stash” seized in Italy.

This fact led some to speculate that, in fact, the bonds, including the so-called Kennedy bearer bonds, were real, but that they had been secretly issued by elements in the American government to keep the economy afloat. Others continued to maintain the counterfeit story. Some began to advance the argument that the Treasury’s announcement in March of 2009 would have allowed two months for forgers to counterfeit the exact amount of bonds and then allow them to be caught, in a murky economic warfare operation.

Are the Kennedy bonds real? Are all these bonds really counterfeit? If they are, the fact they are such excellent copies suggests that whoever was behind it ultimately had to be a nation-state or someone in possession of the genuine article. If they are based on secret “exemplars” then a clear message is being sent to whoever is secretly issuing these bonds: We know the game.

It took US officials two weeks to make a public statement that they were counterfeit. It definitely rattled some people in high up places. Even if they were fakes, they were based on something real that the financial powers did not wish to be known.