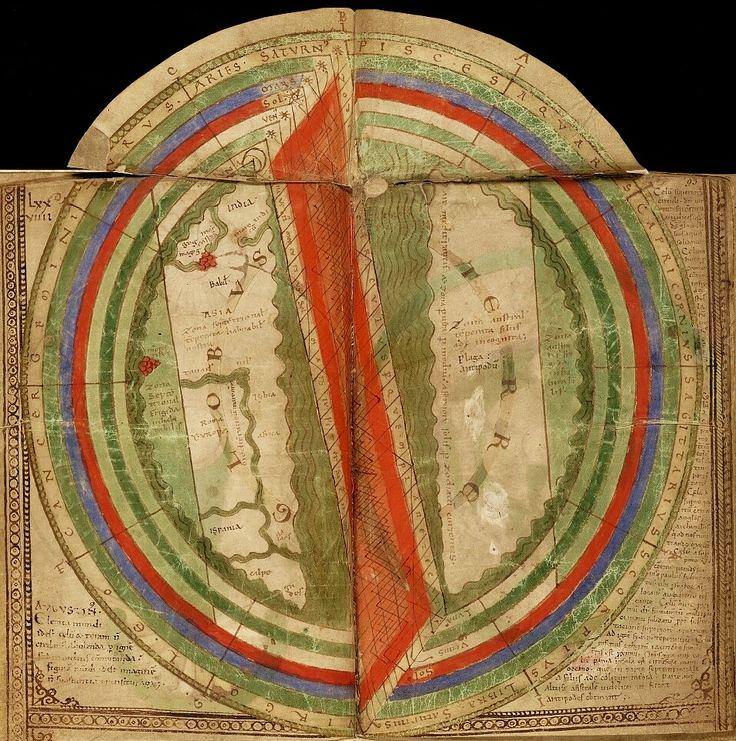 From the fold-out (!) map in the 12th century Liber floridus to the Strava heatmap of where people (who own GPS watches and like to brag on social media) run and bike, maps tell us as much about the people who make them as about the terrain they map.

For today’s technically-it-is-still-Tuesday-in-some-parts-of-the-world Trivia, share some of your favorite historical maps or stories about mapmaking!

The Greeks knew maps at least since the end of the Archaic period. When Aristagoras of Miletos went to Sparta to beg for aid against the Persians in 499 BC, he is said to have brought with him a bronze plaque on which was engraved a map of the Earth “with the whole sea and all the rivers” (Herodotos 5.49.1). The purpose of this display of scientific knowledge, however, was not to inform, but to deceive; by showing the Spartan king Kleomenes in a single glance all the lands he might conquer if he joined the war against Persia, Aristagoras meant to invoke Kleomenes’ greed and lust for glory. What he did not say – until Kleomenes warily questioned him – was just how much ground the map covered. When Aristagoras confessed that it would take an army 3 months to march from the Aegean to the Persian capital at Susa, Kleomenes ordered him to leave Sparta immediately and stop wasting his time with his ludicrous proposals.

The story plays up the strange nature of maps: they represent reality, but a reality that is distorted beyond recognition by the process of its conversion to the map’s limited dimensions. They need a key, a legend, to be properly understood. Greek authors saw the humorous potential of errors in translation, as shown in this splendid joke from Aristophanes’ *Clouds*, written at the height of the Peloponnesian War:

> **Dis.:** Be assured that this is truly the Attic territory.

> **Strep.:** Why, where are my fellow tribesmen of Kikynna?

> **Dis.:** Here they are. And Euboia here, as you see, is stretched out a long way by the side of it to a great distance.

1) About 457 BC, Perikles introduced pay for jury service as a way to democratise justice and/or get the people on his side. After this, Athens came to be seen as an excessively litigious place, where people were only too happy to judge an endless parade of court cases, since it provided them with a nice bit of extra money from the state. Aristophanes frequently characterises Athenian democracy purely through its law courts – for instance in the *Birds*, where it is the noise of the courts in session that drives the main characters to leave town.

2) In 447/6 BC, Euboia revolted from Athens, considerably worsening the already dire situation for Athens in the so-called First Peloponnesian War. Perikles responded by quickly making peace with Sparta and then leading the Athenian army over to Euboia to punish the rebels. The verb “to stretch” can be interpreted in various ways here, but is probably meant to suggest the metaphorical rape of the island.

Fantasy maps have a fascinating history, which we’ve talked about a bit in the past, but for me one of my favorite historical fantasy maps is Robert E. Howard’s conception of [The Hyborian Age](http://theblogthattimeforgot.blogspot.co.uk/2011/12/hyborian-musings-mappa-mundi.html), the setting for his Conan the Barbarian tales. Created before Tolkien’s *The Hobbit* made such maps somewhat standard fare for fantasy works, it represents a lot of effort at worldbuilding by the Texas pulpster.

About [portolan charts], which are a specialized type of map people (navigators) use to find their way into a port or make a specific landfall.

These things could often be [quite elaborate and cover a large area](https://upload.wikimedia.org/wikipedia/commons/7/7b/Portolan_chart_by_Albino_de_Canepa_1489.jpg), and one of the interesting things you can see on that one is that the items to the top side of the chart — further north — are “upside down.” This probably reflects the fact that the chart would be used on a large chart table, and the people looking at it would move around the perimeter of the table to read them. The Bodleian library has [a ton of these things](https://digital.bodleian.ox.ac.uk/inquire/Discover/Search/#/?p=c+1,t+portolan,rsrs+0,rsps+10,fa+,so+ox%3Asort%5Easc,scids+,pid+,vi+) searchable for viewing.