I know during Soviet times they had less autonomy than the Soviet republics, but what made Kazakhstan, for instance, have more autonomy in the USSR than Tatarstan? 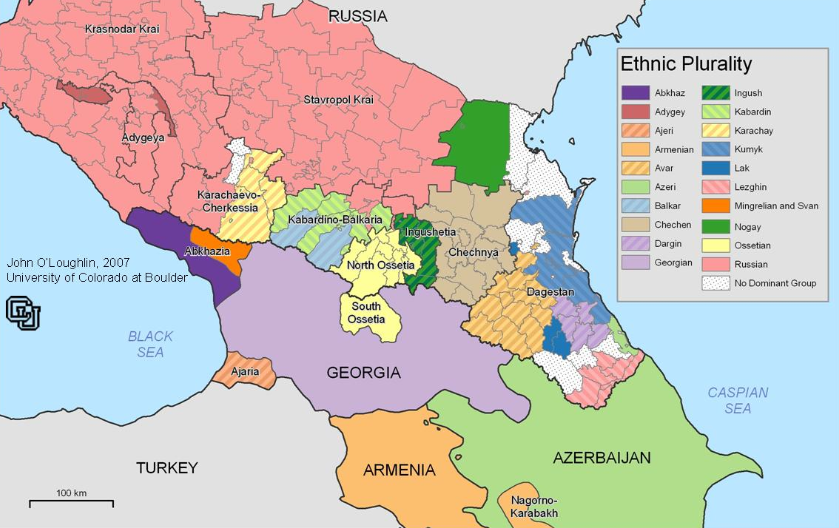 Kaisermatias: As noted, the places you listed (Tatarstan, Chechnya, Dagestan) were all autonomous regions within Russia, which I’ll quickly go over for those unfamiliar:

The Soviet Union was a federation, composed of three levels of divisions: the union republics (Russia, Ukraine, Kazakhstan, etc), which numbered 15 in 1991 and all became independent when the USSR collapsed; autonomous republics (mainly in Russia: Chechnya, Tatarstan, Dagestan were all at this level; Georgia had two, while Ukraine, Azerbaijan, and Uzbekistan all had one), and finally autonomous oblasts (similar to the autonomous republic, but were mainly just places with small populations; again Russia had the most, 16, while Georgia and Azerbaijan each had one).

Now, the union republics were quasi-sovereign states: they had a nominal parliament, capital, constitution, and so on, and (most importantly) were granted the constitutional right to leave the USSR. This right obviously was never exercised, nor would it have been truly feasible, but it was there, and when the USSR fell apart in the latter part of 1991, the republics used this as the pretext to leave. While this was more of a symbolic move, it did give some air of legitimacy for the 15 republics to leave.

Now this is what makes the union republics different from the autonomous republics: the latter did not have this right. They were bound to their nominal state (Russia for the most part), even though both types of republics were largely created to cater to ethnic minorities in the Soviet Union (the process of *korenizatsiia*, or nativisation, that dates to the 1920s and was meant to develop the non-Russian peoples, including giving them autonomy in their affairs). Because both union and autonomous republics were (largely) comprised of non-Russians (or Georgians, Ukrainians, etc), they did not want to join the newly-created Russia/Georgia/Ukraine, fearing they would both lose their considerable autonomy and influence, and be discriminated against.

This is not an unfounded assumption, either. Georgia had two of the autonomous republics, Abkhazia and Adjara. While Adjara is an anomaly in that it wasn’t really made for an ethnic group (the Adjarans are simply Georgians who follow Islam, not Christianity, and it was arguably formed in 1923 to mollify Turkey, who previously controlled the region; but I digress), the Abkhaz were, and were fearful of the first Georgian president, an ardent nationalist who (supposedly) wanted “Georgia for the Georgians” (there’s no evidence he said this, but the sentiment was there). Similar issues came up in Ukraine (with Crimea being the autonomous republic there), and Azerbaijan (though not its autonomous republic, Nakhichevan, but its autonomous oblast, Nagorno-Karabakh, which was populated by ethnic Armenians).

So places like Chechnya and Tatarstan simply did not sign on to the Russian Federation when Yeltsin proclaimed it (Dagestan is an anomaly in that there are so many ethnic groups, about 30, that no one group controls the region, and thus no independence movement really exists).

Now Chechnya is quite known for its refusal to join Russia, what with the two wars in the 1990s, but Tatarstan was similar: it was the lone federal subject not to sign onto the newly-created Russia, preferring to stay in limbo until negotiations in 1994 saw it finally join. This was in part because the Tatars are the largest non-Russian ethnic group in the country, and Tatarstan has a lot of oil production, and thus was wealthy enough to keep the federal government from interfering. But because it is surrounded by Russia, it was impossible for Tatarstan to ever truly secede, and it would have violated the principles of international law, so no states ever seriously recognised its “independence,” for whatever that term may have meant at the time.

So in short, because the composition of the Soviet Union was such that the 15 union republics were able to neatly split off, and be recognised as new states, while the autonomous republics were not granted such an ability, is why there were only 15 post-Soviet republics, and not more, despite the best efforts of Chechnya and company to add to that total.

Slightly_offtopic: There is certainly plenty of room for more discussion on how the situation came to be and the motivations of the various parties involved, but [this answer](https://www.reddit.com/r/AskHistorians/comments/5j3i1l/why_didnt_russia_allow_chechnya_to_secede_in_1993/) explains the basics of the situation in terms of the political structure of the Soviet Union.

Im_not_afraid: Why is the suffix of Chechnya not -stan?

bouncyfrog: Can this be partially attributed to geopolitics? Financially these republic’s are a burden to Russia, but since Russia is unwilling to give up their southern defensive line they keep these troublesome regions.

Previous Post: « “Prejudices are most difficult to eradicate from the heart whose soil has never been loosened or fertilized by education…” Charlotte Brontë
Next Post: United States Olympic Hockey Players Celebrate Victory Over Soviet Union on February 22, 1980 in Lake Placid, New York »