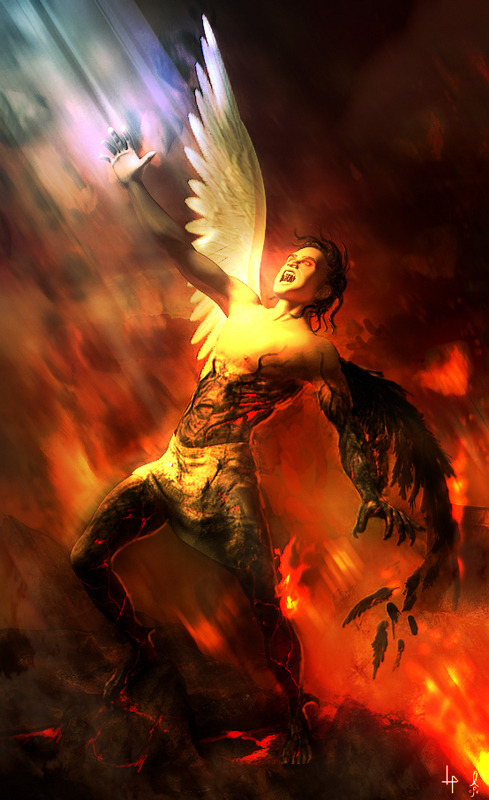 “Why do they blame me for all their little failings? They use my name as if I spent my entire day sitting on their shoulders, forcing them to commit acts they would otherwise find repulsive. ‘The Devil made me do it.’ I have never made any one of them do anything. Never. They live their own tiny lives. I do not live their lives for them.”
-Lucifer
Lucifer (/ˈluːsɪfər/ LOO-sif-ər) is a name that, according to dictionaries of the English language, refers either to the Devil or to the planet Venus when appearing as the morning star.

As a name for the Devil, the more common meaning in English, “Lucifer” is the rendering of the Hebrew word הֵילֵל in Isaiah (Isaiah 14:12) given in the King James Version of the Bible. The translators of this version took the word from the Latin Vulgate, which translated הֵילֵל by the Latin word lucifer (uncapitalized), meaning “the morning star, the planet Venus”, or, as an adjective, “light-bringing”.

As a name for the morning star, “Lucifer” is a proper name and is capitalized in English. In the Greco-Roman civilization the morning star was also personified and considered a pagan god.[8] At that time the distinction between capitalized and lower-case letters had not yet been invented.

In the King James Version of the Bible, Isaiah 14:12 reads:

“How art thou fallen from heaven, O Lucifer, son of the morning! how art thou cut down to the ground, which didst weaken the nations!”

The term “Lucifer” was taken by the King James Version translators from Jerome’s Latin Vulgate (383-405 A.D.) edition of the Bible. The Hebrew word is Heylel’ which suggests the idea of “shining,” or “bearing light.” Jerome assumed the word was the name of the morning star, hence, he rendered it by the Latin title “Lucifer.”

As the idea developed that Isaiah 14 contained a description of Satan’s original fall, the term Lucifer came to be applied to the devil and the designation is commonly employed today.

The fact is, however, there is absolutely no evidence whatever that Isaiah 14 contains any reference to Satan.

It would be strange indeed that the Holy Spirit should designate the ruler of the realm of spiritual darkness (cf. Ephesians 6:12) as “lightbearer.”
The context clearly identifies the narrative as a “parable against the king of Babylon” (14:4). The death of that oppressive character is vividly described. He descends into Sheol where the inmates of that realm taunt, saying, “Is this the man that made the earth to tremble?” (14:16).
This cannot be an allusion to the devil since:

worms eat his body (v. 11), yet Satan has no body;
the subject of the account is called a “man” (v. 16), but the Tempter is a spirit being;
he is to be buried in shame (vv. 19, 20)—a circumstance which is not applicable to the devil (cf. Revelation 20:10).
In the Old Testament, the demise of corrupt national powers is frequently represented under the imagery of falling heavenly luminaries (cf. Isaiah 13:10; Ezekiel 32:7), hence, quite appropriately in this context the Babylonian monarch is described as a fallen star (cf. ASV).

There is, therefore, no reference to Satan in this context.

[T]he text speaks nothing at all concerning Satan nor his fall, nor the occasion of that fall, which many divines have with great confidence deduced from this text. Oh how necessary it is to understand the literal meaning of Scripture, that preposterous comments may be prevented (n.d., 82).

« A Japanese woman carries her son on her back as she marks her ballot in Tokyo on April 10, 1946, in Japan’s first free election in generations.
A U.S.Navy river patrol boat (PBR) crewman maintains vigilance at the .50-caliber machine gun during the boat’s day-long patrol on the Go Cong River, January, 1967. »