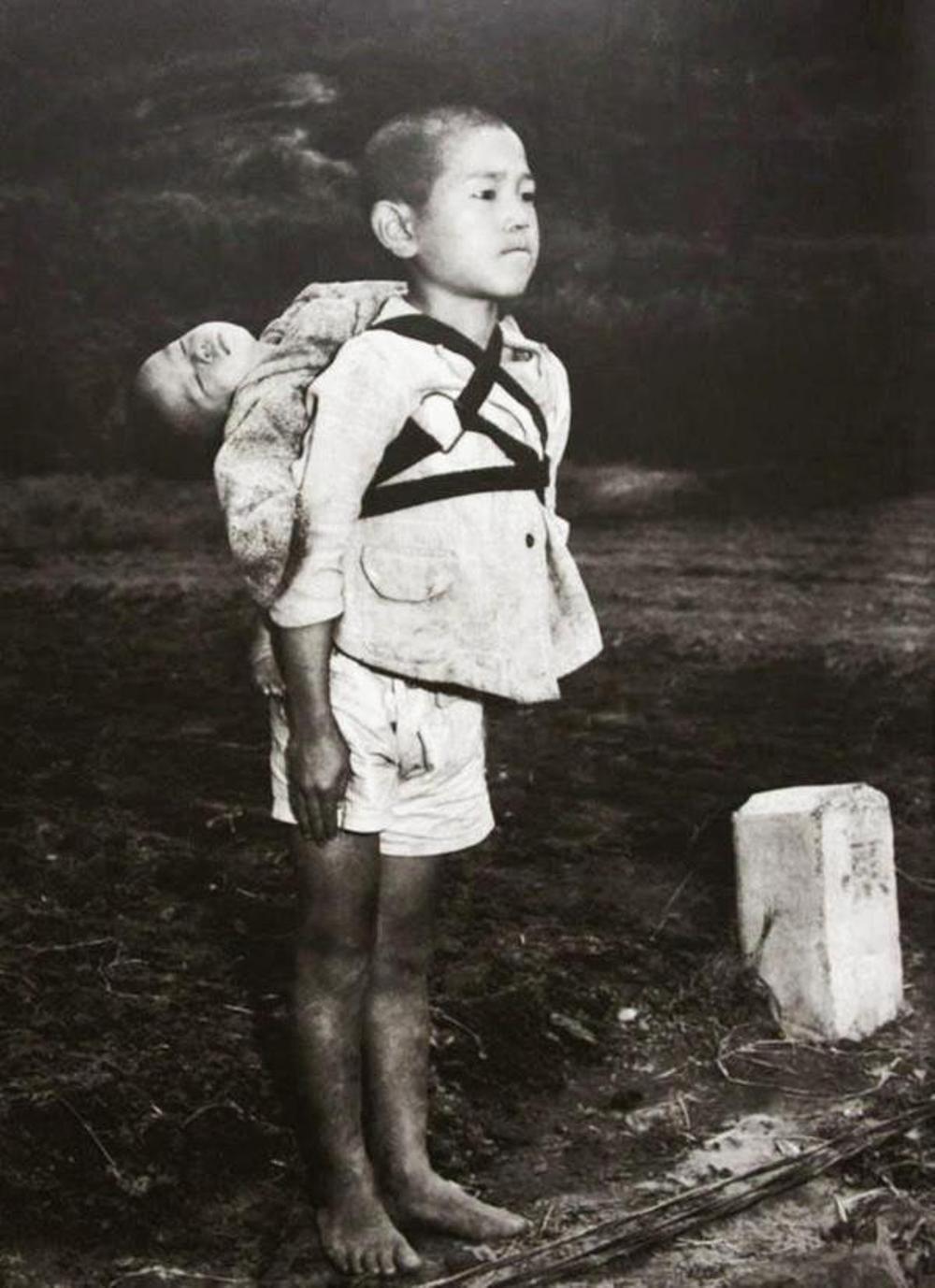 burgerkingd: This pictures reminds me of that Studio Ghibli movie from the 80s “Grave of the fireflies” about 2 Japanese siblings trying to survive just before the end of the war while Japanese cities were being bombed every day. The scene where the brother cremates his sisters body is so like this image. It’s a real tear jerker and is even more tragic when you realise that these events were repeated many times.
Edit: Corrected the name of the movie

domenicocavasso: Joe O’Donnell, the man who took this photo at Nagasaki, was sent by the U.S. military to document the damage inflicted on the Japanese homeland caused by air raids of fire bombs and atomic bombs. Over the next seven months starting September 1945, he traveled across Western Japan chronicling the devastation, revealing the plight of the bomb victims including the dead, the wounded, the homeless and orphaned. Images of the human suffering was etched both on his negatives and his heart.

In the photo, the boy stands erect, having done his duty by bringing his dead brother to a cremation ground. Standing at attention was an obvious military influence. Looking at the boy who carries his younger sibling on his back, keeps a stiff upper lip, tries so hard to be brave is heart-breaking. He has epitomized the spirit of a defeated nation.

Sometimes later Joe O’Donnell spoke to a Japanese interviewer about this picture:

“I saw a boy about ten years old walking by. He was carrying a baby on his back. In those days in Japan, we often saw children playing with their little brothers or sisters on their backs, but this boy was clearly different. I could see that he had come to this place for a serious reason. He was wearing no shoes. His face was hard. The little head was tipped back as if the baby were fast asleep. The boy stood there for five or ten minutes.”

“The men in white masks walked over to him and quietly began to take off the rope that was holding the baby. That is when I saw that the baby was already dead. The men held the body by the hands and feet and placed it on the fire. The boy stood there straight without moving, watching the flames. He was biting his lower lip so hard that it shone with blood. The flame burned low like the sun going down. The boy turned around and walked silently away.”

ariahann00: The determination in his face is heart breaking. What a brave boy, does anyone know if we know what happened to this boy after this picture?

Invicturion: Fuck……. Was having a great day… Now i feel like shit…. Powerful as hell!

Eisenmonoxid: I immediately thought of “Grave of the Fireflies”. Should probably watch it again.

Previous Post: « Today in history: The Boston Molassacre
Next Post: How did the money transfer for the Louisiana Purchase happen in practice? Did Americans load a bunch of money in ships and send it to France? »