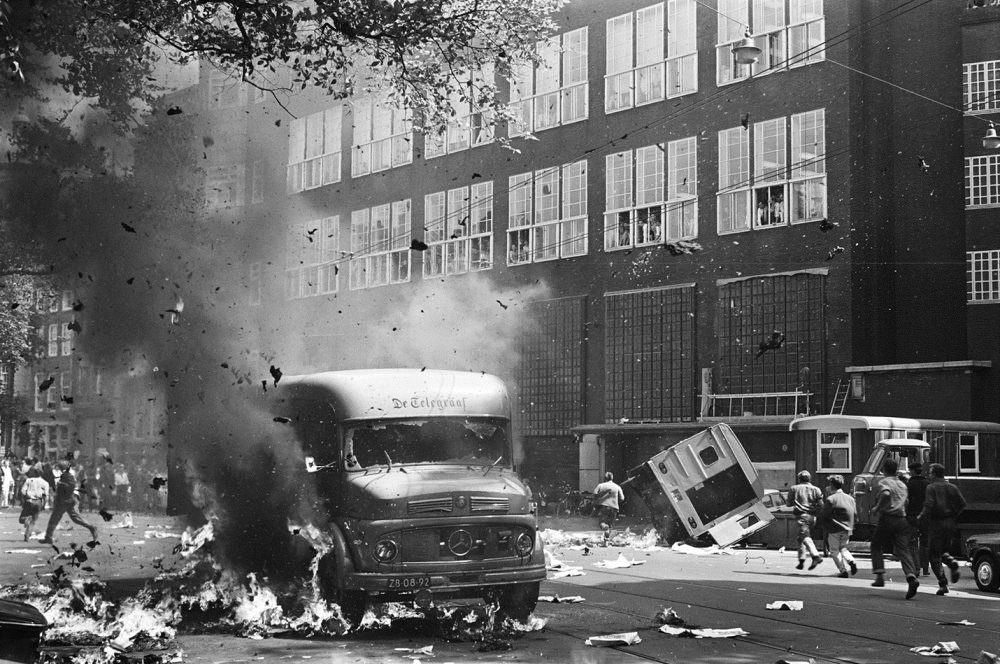 On June 14, 1966, the biggest riots since World War II took place in the center of Amsterdam. The day before, construction workers had clashed with police over cuts of vacation bonuses. During the incidents, outside the offices where vouches were given, the 51 year old bricklayer Jan Weggelaar collapsed and died at the hospital of a heart attack. With the circumstances around his death still unclear, workers claimed that it had been consequence of the police brutality, while initially police and the De Telegraaf newspaper, on the next day edition, June 14, claimed that it had been caused by a brick thrown to his head by his colleagues.

The article caused anger among construction workers. The day after, June 14, workers protested outside a police station and, after a leader gave a speech, condemning police brutality and accusing De Telegraaf of always siding with the employer and against the employee, they attacked the building of the newspaper at Nieuwezijds Voorburgwal, torching several vehicles of the company and newspaper roll.

After an exceptionally slow police response, riots spread along the Amsterdam city center. The then growing provo movement took over the clashes, eventually replacing the construction workers. The police response was harsh, chasing and hitting people from running sidecars and using tear gas for the first time in the history of the Netherlands. Around 60 people were wounded, two of them shot, and 20 police officers were injured. The incidents forced the mayor of the city to resign, amid accusations of poor management and police brutality. On June 17, the funeral of the dead worker took place, without further incidents.

Previous Post: « Liberated Russian slave labourers being rescued from a cellar after it had been set on fire by a German policeman, Osnabruck, 7th April 1945
Next Post: Young woman on the Seine’s banks, Paris, 1955 »