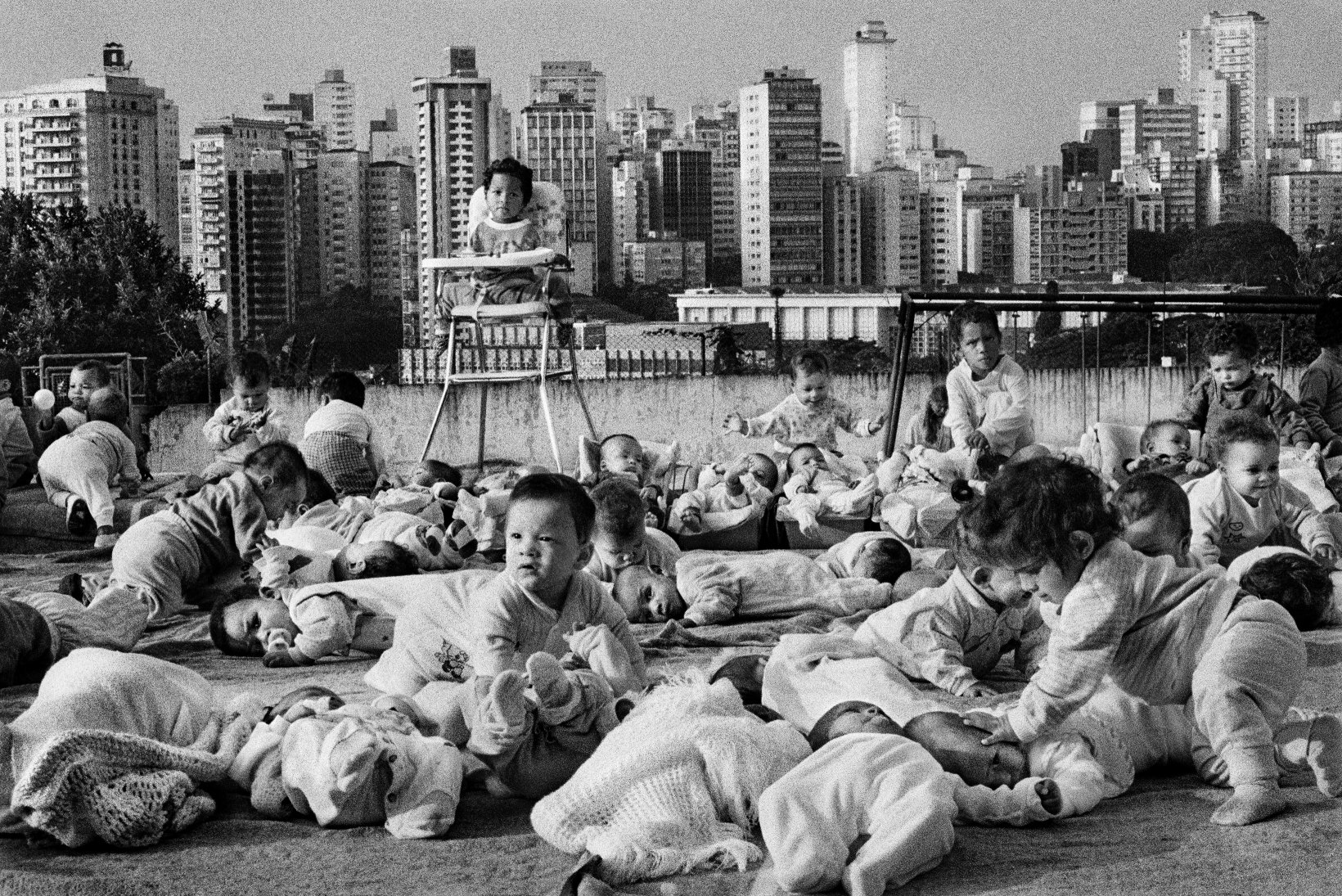 Babies playing on the roof of a FEBEM (foundation for Child Welfare) center in the Pacaembu district. Some 430 children live here, 35% of whom were abandoned on the streets, the others delivered at the center by parents no longer able to care for them. São Paulo, Brazil.

L0rdAri: Baby in the chair looks like their leader…

Zouea: Oh god, so many babies on the roof you can’t even run across to catch that one monkey baby that tries to escape.

“They were frightened, uncomfortable and humiliated. Yet they allowed themselves to be photographed, I believe, because they wanted their plight to be made known. When I could, I explained to them that this was my purpose. Many just stood before my camera and addressed it as they might a microphone.” (Salgado Migrations Book Review, 2006)

Migrations is one of the best photo stories that Sebastiao Salgado has ever made. He came with the idea of making this project in 1992, began photographing in 1993 and finally in 1999 he finished. Almost 6 and a half years that he travelled for almost 47 countries in where people moved  from place to place, shooting in more than 40 of those countries he found the perfect images that reflect exactly what he wanted to exhibit to show the world.

He wanted to tell a visual story Salgado of the life of these people, the difficult journeys that they take in search of a better life due to difficult moments in their country or because the war has taken everything. These people these lives, are of those who can’t speak, can’t shout the reality to the world. The main purpose of the photographer in this work was to give them the chance of showing to the rest of the world, what is happening near us.

Capturing the dramatic, tragic and heroic moments that he witnessed while being with immigrants, he wanted to demonstrate that a true human family is built by solidarity and sharing. Despite all the hate and the desperation that he saw, he came upon magical moments of dignity, compassion and hope in situations where one have expected anger and hostility; people who had lost everything but where still trusting a stranger, families who risked everything with the hope of improving their destiny.

During this project he understood that everything in this world is connected. All of us are affected by the extend hole between rich and poor, the easy access of information, the population growth in the Third World, the uncontrolled urbanization, the destruction of the environment, the ethnic, religious and nationalistic intolerance. The people pulled out from their homes are the visible victims of this global changing; their life and circumstances are just the result of our own making.

“People have always migrated, but something different is happening now. For me, this worldwide population upheaval represents a change of historic significance. We are undergoing a revolution in the way we live, produce, communicate and travel. Most of the world’s inhabitants are now urban. We have become one world: In distant corners of the globe, people are being displaced for essentially the same reasons.” (Salgado Migrations Book Review, 2006)

For Salgado the execution of this project is the chance to tell a little bit of his story, leaving his house when he was 5 and moving to a town of about 10,000 people, ten years later they moved to a medium-sized town of about 12,000 people, and finally he moved to a big big city, São Paolo, before going to France. He can see his story as a migrant when he sees migrants trying to adjust to a different kind of life, one that they are not used to.

“I want to show the immigrants’ dignity in their willingness to integrate into another country, to show their courage and their entrepreneurial spirit and, not least, to demonstrate how they enrich us all with their individual differences. Above all, by using migration as an example, I want to show that a true human family can only be built on foundations of solidarity and sharing.”(Salgado`s Interview PND’s Nancy Madlin)

When he talks to those who are leaving their country and searching for a new beginning, he asks them why? And the answer surprises him, not because of the honesty but because the simplicity: ‘Maybe we will find a seven days a week job, and maybe we will have one day a month free, and maybe our girlfriend will come some day and buy a used car and we will get a small house’. For the rest of us, that is the minimum that a human being must have.

“These photographs show part of this present. We cannot afford to look away”
(Salgado Migrations Book Review, 2006)

These pictures were taken in the decade of the 90’s, imagine how is it right now, 20 years later.