Geologists in Turkey have uncovered track marks left by vehicles they say belonged to an advanced ancient civilization from 14 million years ago. Russian geologist Alexander Koltypin says he believes the mysterious markings that extend along the Phrygian Valley, in central Turkey, were made by a highly intelligent race between 12 to 14 million years ago.

Ancient-code.com reports: “We can assume that ancient vehicles with “wheels” were driven into the soft ground, perhaps a wet surface,” said the geologist. “Because of the great weight of these vehicles, they left behind very deep grooves which eventually petrified and turned into evidence.”

Geologists are familiar with such phenomena as they have found petrified footprints of dinosaurs that were preserved in the same way.

Together with three colleagues, Dr. Koltypin, director of the Natural Science Scientific Research Centre at Moscow’s International Independent Ecological-Political University, traveled to the site in Anatolia, Turkey where these markings can be found. Upon returning from his trip, he described the observed as ‘petrified tracking ruts in rocky tuffaceous [made from compacted volcanic ash] deposits’.

Dr. Koltypin said: ‘All these rocky fields were covered with the ruts left some millions of years ago….we are not talking about human beings.’

‘We are dealing with some kind of cars or all-terrain vehicles. The pairs of ruts are crossing each other from time to time and some ruts are deeper than the others,’ he added.

According to Dr. Koltypin these mysterious ruts are between 12 to 14 million years old.

‘The methodology of specifying the age of volcanic rocks is very well-studied and worked out,’ he said.

Dr. Koltypin is one of few experts that actually believe that science needs to change their approach to different matters. He believes that there are many archaeologists who avoid touching this matter since it would ruin all classic theories.

‘As a geologist, I can certainly tell you that unknown antediluvian [pre-Biblical] all-terrain vehicles drove around Central Turkey some 12-to-14 million years ago.’ said Dr. Koltypin.

He said: ‘I think we are seeing the signs of the civilization which existed before the classic creation of this world. Maybe the creatures of that pre-civilisation were not like modern human beings. ‘

According to Dr. Koltypin and many other archaeologists and experts which have adopted new ways of thinking these ancient “car tracks” are one of the best-preserved pieces of evidence which undoubtedly prove the existence of highly advanced ancient civilizations that inhabited our planet in the distant past.

“There was no comprehensible system for the tracks but the distance between each pair of tracks ‘is always the same,” added Dr. Koltypin.

‘The maximum depth of a rut is about three feet (one meter). On the sides of ruts, there can be seen horizontal scratches, it looks like they were left by the ends of the axles used for ancient wheels.

‘We found many ruts with such scratches,’ he said.

Meanwhile, near the land of milk and honey …

Wheel Of Giants: Mysterious Stone Monument In Golan Heights Is As Old As Stonehenge

The most mysterious structures in the Middle East is easy to miss, it sits in the contested Golan Heights and is so vast that it is best seen from the sky. 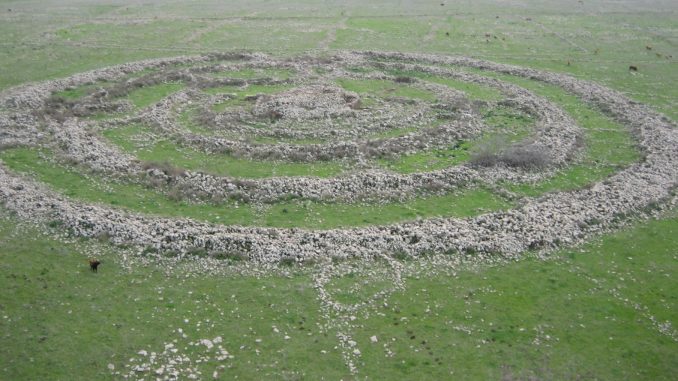 The prehistoric stone monument has gone unnoticed for centuries in a bare expanse of field in the disputed region of the Golan Heights.

Archaeologists have dated the ancient megalithic site as being about 5,000 years old or approximately the same age as Stonehenge in Wiltshire.

The monument is known by two names. Its Arabic name is Rujm el-Hiri meaning the ‘stone heap of the wild cat,’ while ts Hebrew name Gilgal Refaim means ‘wheel of giants’ and refers to an ancient race of giants mentioned in the Bible.

However, archaeologists still don’t know who built it, or for that matter why.

Theories include an ancient calendar, or a ‘sky burial’ site  and some believe that the monument may have astronomical significance and could have been used as an observatory.

After Israel captured the territory from Syria in a 1967 war, archaeologists studying an aerial survey spotted a pattern of stone circles not visible from the ground. Subsequent excavations revealed it was one of the oldest and largest structures in the region.

Known as Rujm el-Hiri in Arabic, meaning the “stone heap of the wild cat”, the complex has five concentric circles, the largest more than 500 feet (152 m) wide, and a massive burial chamber in the middle. Its Hebrew name Gilgal Refaim, or “wheel of giants”, refers to an ancient race of giants mentioned in the Bible.

It is up to 5,000 years old, according to most estimates, making it a contemporary of England’s Stonehenge. Unlike the more famous monument built with about 100 huge stones topped by lintels, the Golan structure is made of piles of thousands of smaller basalt rocks that together weigh over 40,000 tons.

“It’s an enigmatic site. We have bits of information, but not the whole picture,” said Uri Berger, an expert on megalithic tombs with the Israel Antiquities Authority.

“Scientists come and are amazed by the site and think up their own theories.”

No one knows who built it, he said. Some think it might have been a nomadic civilisation that settled the area, but it would have required a tremendous support network that itinerants might not have had.

There could be an astrological significance. On the shortest and longest days of the year – the June and December solstices – the sunrise lines up with openings in the rocks, he said.

Standing on the ground inside the complex, it looks like a labyrinth of crumbling stone walls overgrown with weeds. From on top of the five-meter-high burial mound, it is possible to make out a circular pattern. Only from the air does the impressive shape of a massive bull’s-eye clearly emerge.

Shards of pottery and flint tools were found in various excavations to help date the site, Berger said. Scholars generally agree that construction started as early as 3,500 BC and other parts may have been added to over the next two thousand years.

The complex is in an area now used for training by Israel’s military, but visitors can explore the walls and crawl into the 20-foot-long burial chamber on weekends and holidays. Mexico City – Paxson C. Hayes, an explorer, has dug up a prehistoric civilization in the Northern Mexico area of Barranca de Cobre, which appears to prove ancient legends of huge blond Mexican Giants.

Previous Post: « Enslavement in the land of milk and honey
Next Post: Google Ditches ‘Fact-Check’ To Give Alternative Media A Break. But Their Secret Speech Police Unit Is Still Intact »