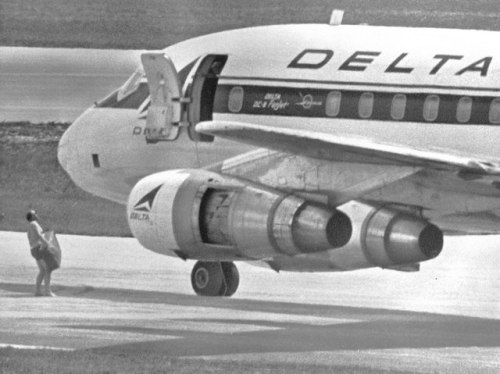 Five adults hijacked an aircraft flying from Detroit to Miami, landed in Miami as scheduled, let the passenger hostages go (kept the crew hostage), flew the aircraft to boston, picked up a flight engineer, took their ransom of a million dollars and a bunch of snacks, refueled the aircraft, then flew to Algeria.

The Algerians then took the ransom and the crew hostages and sent them back to the US, and released the hijackers, who were captured 4 years later in France and served very mild sentences.

Reggiesanchez: He’s not an FBI agent, he was Boston Delta’s foreman. Says it in the article

Previous Post: « The French Village, Hollywood, CA, 1937
Next Post: Soviet soldier and poet Yevgeniy Dolmatovsky poses with a bronze bust of Adolf Hitler in Berlin, May 1945. »