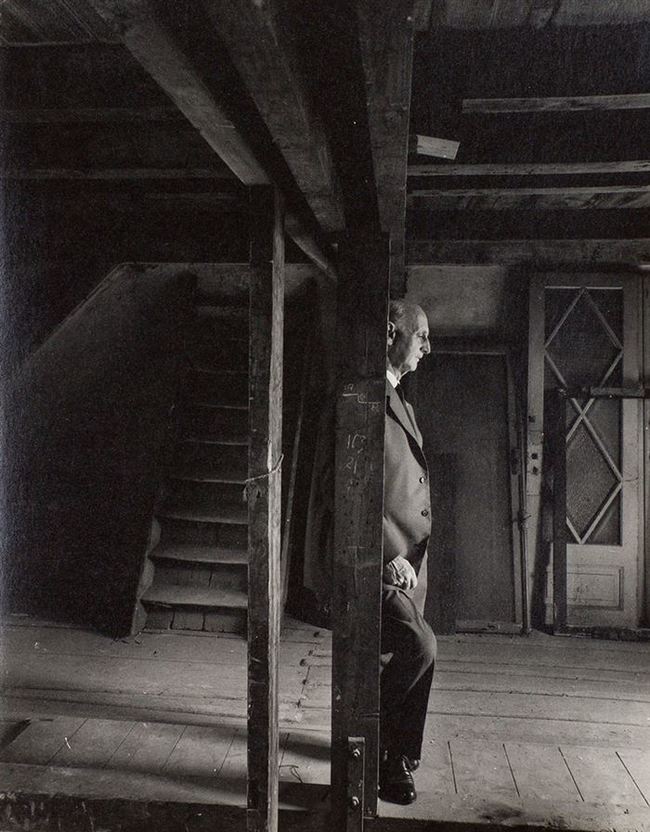 Thepearlrabbit: This is very difficult to look at. Just imagine how he must have felt when he first realized he was the only one to survive out of the 8 people who were taken from the attic that day.

sveeedenn: August 4th, 1944 is the day they got captured. It’s mind numbing how recent that is.

This picture makes me very sad.

ZiggyMars: The weight on his shoulders must have been unbearable. Glad this moment was captured.

senatorskeletor: I just can’t ever get past the fact that someone voluntarily sold out a hiding, terrified family and had them sent off to camps. How can anyone think that’s what needed to be done?

The_Holy_Grail: An American named Arnold Newman took this photo. When Newman photographed Otto Frank, father of Anne Frank, he found his heart and mind hesitating. “How could I ask this man to pose?” he shared with us. “I couldn’t. Instead, I just waited, and Otto went into a deeply pensive mood. It was then that I took the photograph.” When the session was over, the two men embraced–and cried. [Source](http://www.apogeephoto.com/dinner-with-arnold-a-conversation-with-arnold-newman-in-madrid/)

burritobitch66: I visited this house last year and Auschwitz. It was such an overwhelming experience

Merari01: The diary of Anne Frank is a book that is difficult to read, because you know how it is going to end.

Anne wanted to grow up to become a writer and she had talent in that direction. She wrote the book in the style of a series of letters to an imaginary friend called Kitty. It reads just like a young-adult adventure novel, as were commonly written in that era. Plucky young women faces adversity bravely and builds character, kind of thing.

What makes reading it difficult is that unlike fictional young-adult adventure novels the hardships that the protagonist bravely endures are not overcome. It does not all turn out well in the end, lessons learned, moving on to a better life.

It ends abruptly. With an editors note stating that a short time later the raid took place, the families in the attic were captured, deported to camps and notes their final faith. Anne and her sister Margot died of typhoid.

This is what makes it such a powerful book. A young woman, with hopes, dreams, who collected pictures of movie stars that she cut out and pasted into a notebook. Trapped in an attic, dreaming of her future. Died mere months before the end of the war.

I can recommend her book to anyone.

kingcaesarus: That’s what “to capture a moment” truly means.

A636260: What makes this even worse is knowing that Anne Frank (and her sisters too I think) died about 45 days before their camp was liberated, from Typhus Fever.

OurSaviorBenFranklin: You can visit the attic in Amsterdam. It is a museum now. It’s incredibly powerful. It’s a hard thing to believe but when you walk through there a force seems to lay on your heart. Like real things, real terrifying history, happened in this exact spot and you seem to be able to feel that.

SiLeAy: Did the photographer win the Pulitzer? Because this is an incredible piece of history

DarkSummit90: I just remember reading *The Diary Of Anne Frank* in school just envisioning the smell, the stench, and the horror of that life during that time period.

spinfip: Why are there stairs leading up in an attic?

BlueStreaker11: If this doesn’t invoke emotion, you are not human.

tuanomsok: I’ve visited that attic. I don’t have words to describe what it feels like to be there. Heavy. Sad. Poignant.

I read her diary when I was in 7th grade. I read it more than once, actually. It made quite an impression on me. When I visited the secret annex, as you go up the stairs you get to the “swinging cupboard” mentioned in the book. The moment I saw that cupboard, it all kind of hit me. Intellectually, I knew that the book wasn’t fiction and really happened, but to actually see the swinging cupboard right in front of me, and to reach out and touch it with my hand – it all of sudden became very tangible and real. I really don’t know how to describe that moment when you see right in front of you something you read about.

In her diary, Anne describes how she decorated the wall in her bedroom with postcards and pictures of her favorite movie stars and pictures of then-Princess Elizabeth (now Queen.) Those pictures are still on the wall, protected with a layer of Plexiglass.

I encourage anyone to read *The Diary of Anne Frank,* and if you are ever in Amsterdam, please go visit the Anne Frank House/Museum. It’s important for us to continue to bear witness to these remnants of such a tragic history, and ensure that it never happens again.

cryptogram: Not to take away from the moment, but what is with his legs in this photo? His feet are pointing in a different direction. Is he sitting on something ? I cannot make sense of it.

amymadd: I was literally just talking about my love for Anne Frank and how badly I want to visit the Annex, and this shows up on my feed. This picture is heartbreaking and beautiful.

Andromeda321: I lived in Amsterdam five years just a few blocks from the Anne Frank house- I could hear the same clock chimes she describes in the book as an “old friend,” and the length of the line was always my “tourist barometer” for how many were in the city.

You can hear Otto describe discovering the diary on a film there and he was shocked at the depth she had- they were literally living with no privacy so he assumed he knew his daughter and she was a cheerful, not too serious teenager. In a line I appreciate more now that I’m older, Otto then reflects that you never truly know your children.

It must have been strange growing so close to your daughter after she was gone.

lunapeachie: I can’t even imagine what is going through his mind in that picture. Good memories, bad memories, the feeling of isolation with only the radio as your link to the outside world, not knowing when you can leave this sanctuary/prison, knowing the regime that promised to protect the people is the same one that wants you dead. It’s a sadly humbling feeling, really.

thesciencestuff: We had this novel in our 10th grade …. This was the only novel I read with a little bit of facination …. Truly moving story …

Brighton1000: My heart hurts now. Thanks.

amarok1234: Ppl should finally realize that the anna frank diary is a fiction. Why is this not understood already?

iambetterthanyouare: Doesn’t look like the attic. Looks like the basement or one of the floors. An attic would not have a staircase going up.

IssacTheNecromorph: **Didn’t Anne used to write some rather…interesting things in her diary? Things that had to be edited out to preserve her decency?**

[Yep. Here it is. You guys are so squishy.](https://www.google.com/amp/s/amp.theguardian.com/commentisfree/2013/may/02/anne-franks-diary-pornographic-uncomfortable-truth)

I_hamsterrs: The real holocaust is When I go to petco and by all the hamsters