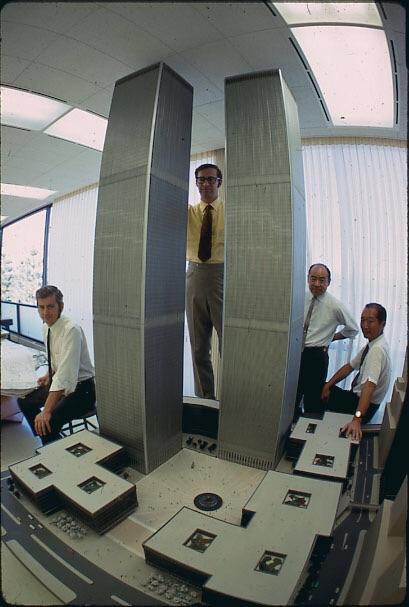 Construction of the World Trade Center

The construction of New York City’s first World Trade Center complex was conceived as an urban renewal project, spearheaded by David Rockefeller, to help revitalize Lower Manhattan. The project was developed by the Port Authority of New York and New Jersey, which hired architect Minoru Yamasaki who came up with the specific idea for twin towers. After extensive negotiations, the New Jersey and New York state governments, which oversee the Port Authority, agreed to support the World Trade Center project, which was built at the site of Radio Row in the Lower West Side of Manhattan, New York City. To make the agreement acceptable to New Jersey, the Port Authority agreed to take over the bankrupt Hudson & Manhattan Railroad, which brought commuters from New Jersey to the Lower Manhattan site and, upon the Port Authority’s takeover of the railroad, was renamed PATH.

The towers were designed as framed tube structures, which provided tenants with open floor plans, uninterrupted by columns or walls. This was accomplished using numerous closely spaced perimeter columns to provide much of the strength to the structure, along with gravity load shared with the core columns. The elevator system, which made use of sky lobbies and a system of express and local elevators, allowed substantial floor space to be freed up for use as office space by making the structural core smaller. The design and construction of the World Trade Center, most centrally its twin towers, involved many other innovative techniques, such as the slurry wall for digging the foundation, and wind tunnel experiments.