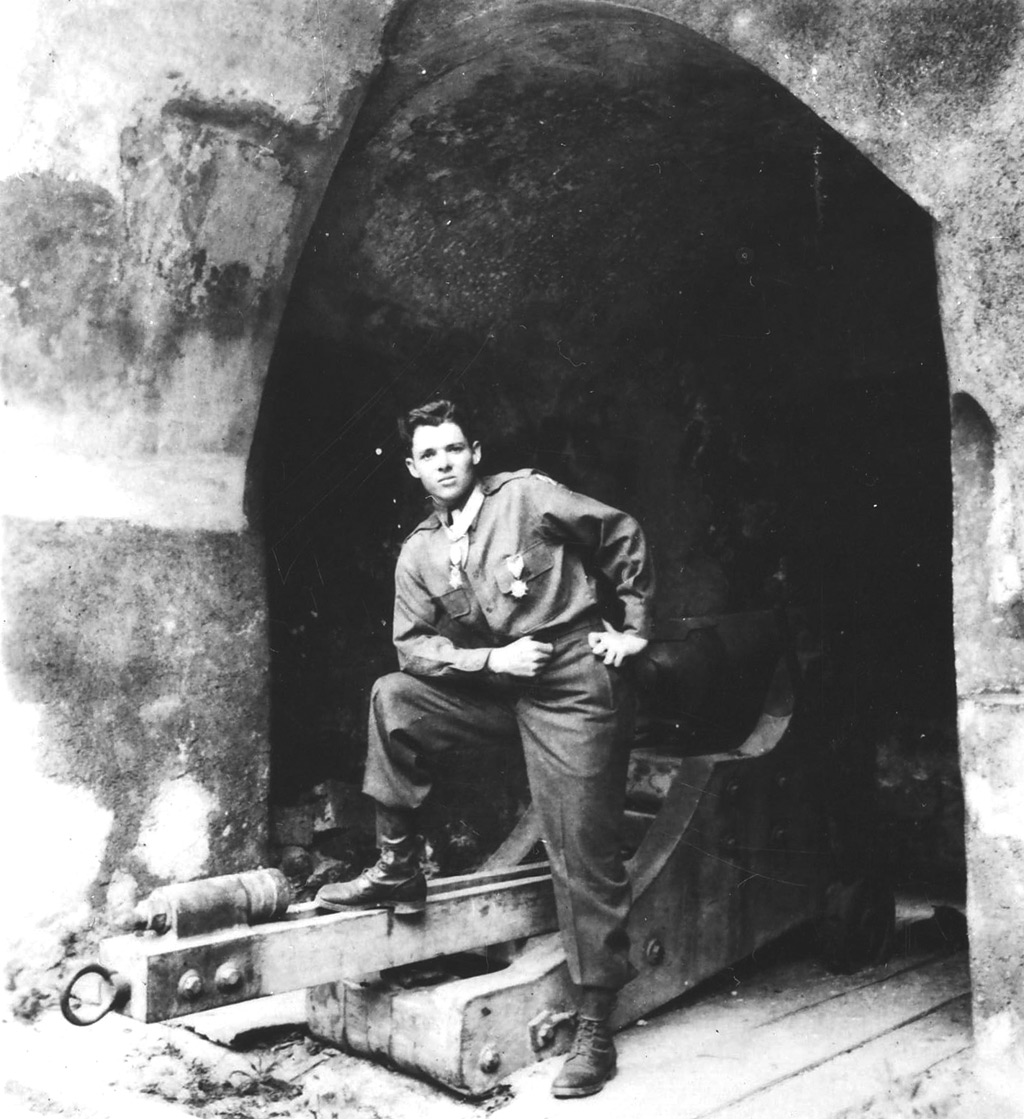 Gabrielredux: Classic good looks made him a fine actor…. shame he died so young.

>With both American tank destroyers out of action and large enemy infantry and armored forces moving on his position, Murphy realized that the remnants of his company could hold out no longer. He ordered his men to fall back to safety deep in the forest while he stayed behind, directing artillery fire. … It was not a heroic act, said Murphy. I figured if one man could do the job, why risk the lives of others.

>He ordered fire directly on top of the advancing Germans, communicating target instructions to 1st Battalion headquarters while at the same time shooting at the enemy infantry with his carbine… The Germans had advanced to within 50 yards of Murphy when a nervous lieutenant from battalion headquarters inquired about the enemy’s position. Murphy replied, If you just hold the phone a minute, I’ll let you talk to one of the bastards.

>After exhausting his carbine ammunition, Murphy was preparing to fall back when the .50-caliber machine gun on the turret of the burning tank destroyer caught his eye. Soon the fire would reach the vehicle’s fuel and ammunition, but Murphy knew the gun was his only chance to stop the Germans. He climbed aboard the tank destroyer and began spraying the big .50-caliber at the enemy. Private First Class Anthony V. Abramski later reported, I saw Lt. Murphy climb on top of the burning tank destroyer while bursts of machine pistol fire from the advancing infantry battered against the hull and tread.

>Murphy knew that the .50-caliber would have no effect on the tanks, so he concentrated his fire on the advancing infantry. I would not waste my ammunition on something that direct hits by 90mm shells could not slow down, he said. I concentrated on the foot soldiers, believing that the tanks would not advance very far without them. Private Charles Owen, one of the 18 men left in Company B, watched in awe as Murphy raked the oncoming enemy…

>Another observer, Sergeant Elmer Brawley, who witnessed the engagement from the fringe of the woods, added, The German infantrymen got within 10 yards of Lieutenant Murphy, who killed them in the draws, in the meadows, in the woods–wherever he saw them. Murphy’s deadly fire on the supporting infantry eventually forced the tanks to return to an area in front of the woods. These tanks added their murderous fire to that of the Kraut artillery and small-arms fire that showered the lieutenant’s position, Brawley said.

>The billowing smoke from the tank destroyer, combined with the constant roar of battle, prevented the Germans from detecting where the machine-gun fire was coming from. According to Murphy, With all the crackle of firearms and big shells exploding all around, they probably didn’t even hear my machine-gun fire, much less guess its point of origin. Although the smoke provided some concealment, it also interfered with Murphy’s visibility, which allowed some enemy soldiers to creep up unnoticed on his right flank. He wrote: When I first saw them, they had stopped in the drainage ditch directly in front of me and were frantically discussing something. I pressed the trigger and slowly traversed the barrel–the bodies slumped in a stack position.

>Suddenly, two 88mm shells slammed into the tank destroyer. The concussion and shock of the explosion threw Murphy violently against the turret, nearly knocking him to the ground. Lieutenant Murphy was enveloped in clouds of smoke and spurts of flame, Weispfenning recalled. Miraculously, Murphy managed to maintain his composure and continued to fire the machine gun. The only time he stopped firing was when he had to reload or relay firing instructions to artillery. Years later, displaying his characteristic dry wit, Murphy remarked: I remember getting the hell shook out of me, but that was nothing new. I also remember for the first time in three days my feet were warm…

>With the renewed barrage, the Germans finally realized that someone had them zeroed in with artillery. However, they still could not locate the source of the machine-gun fire that was cutting their ranks to pieces. A small group of Germans managed to infiltrate the woods as far back as the 1st Battalion headquarters, but the majority of the enemy infantry began to fall back toward Holtzwihr. Without the protection and support of the foot soldiers, the German armor wisely left the field…

>Just as the Germans began to fall back, Murphy’s field telephone went dead. Exhausted and bleeding profusely, Murphy climbed off the burning tank destroyer and limped back into the forest. I turned from the Germans and never looked back, he recalled. I was too weak from fear and exhaustion to care anymore. Shortly after reaching the woods, Murphy heard the tank destroyer blow up, blasting off the turret on which he had been standing.

>Although steel and rock fragments riddled the field map that he had carried during the battle, Murphy had been incredibly lucky. His trousers were soaked with blood from an old wound, suffered the previous October, that had been reopened in the course of his frenzied ordeal. Murph was a daredevil; he took chances that others just wouldn’t take, recalled Brad Croeker, a Company B private. He was too daring for most of us. His middle name was lucky. Bill Weinberg added: I think he was just willing to stick his neck out. But it was a matter of being careful, too. He took more chances than others, but he did it in a calculated way.

>When Murphy got back to his company, he helped organize a counterattack. In sworn testimony, Sergeant Brawley stated: Lieutenant Murphy, refusing to be evacuated, led us in a strong attack against the enemy, dislodging the Germans from the whole area. Murphy continued advancing until the men of Company B had reoccupied their original positions…

[Murphy lied about his age](https://www.fold3.com/page/642820140-they-were-killing-my-friends) in an attempt to join the Marines, the Paratroopers, and the Navy. Each of which rejected Murphy for being to small. Though, the Army accepted him. After the war, when asked why he had taken the risks that he did at Holtzwihr, he responded simply “They were killing my friends.”

theletterQfivetimes: IIRC, he became an actor once the war was over. He starred as himself in a biopic about his life as a soldier, but he had them tune down the heroics because he thought people wouldn’t believe them. His career was too unbelievable for a Hollywood movie.

Animal40160: It’s “The Medal of Honor” Not Congressional. Just passing that on. Previous Post: « Elderly Civil War Veteran recalls his life to listening children, 1935
Next Post: French children salvaging food from the cars of a wrecked train climb on a Moselle River railway bridge destroyed by the retreating Germans in France on Dec. 5, 1944 »