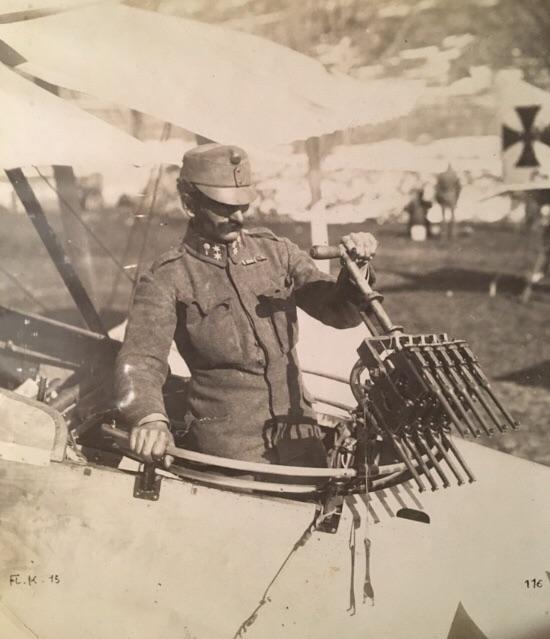 RapGameVladimirPutin: This, alongside many other photos taken by the same photographer, were found by my grandfather in a bombed out house in Yugoslavia during the Allied bombings in 1944

derbyshiredave: Great picture, thanks for posting! They’re not revolvers though

Weiner365: Just so you know, Mauser C-96s are semi automatic pistols, not revolvers

mafiaking1936: And that’s how, with a few minor adjustments, you can turn a regular gun, into ten guns!

JabbaLeChat: I’ve been corrected as follows…

“The photo regularly pops up across the web. The text does not relate to a year, but rather a unit, in this case Fliegerkompanie (FliK or Fl.K) 15. This unit operated first on the Serbian Front and later in Trentino. This photo’s from earliest 1916, based on the uniform & facings.

The weapon(s) are one of many different attempts at arming observation aircraft while suffering from a severe shortage of guns. I’d say this is a one-off, probably made by personnel of the unit. Improvised weapons mounts and the like were common until 1917/18. That’s about all.”

Previous Post: « The last wedding in a synagogue defaced by swastika graffiti, The Hague, The Netherlands, 1942
Next Post: Kotsuis and Hohhug, Nakoaktok — Nakoaktok men in ceremonial dress, with long beaks, crouching on their haunches / c. 1914 / Photograph by Edward S. Curtis »