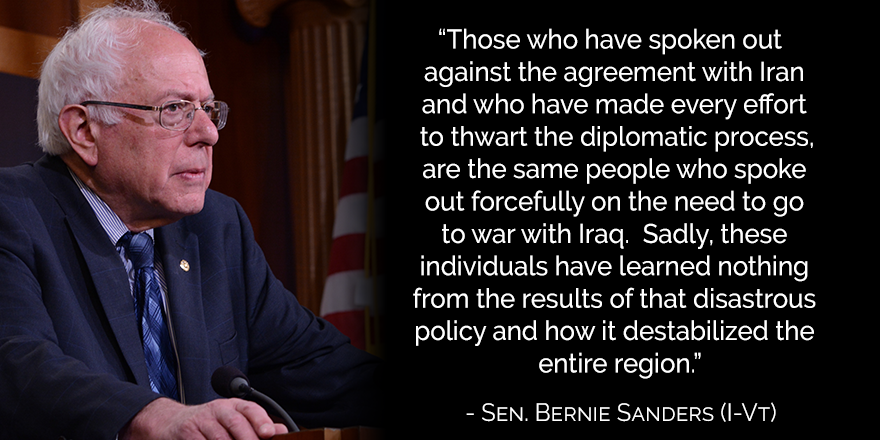 President Trump’s decision to withdraw from the Iran nuclear deal is the latest in a series of reckless decisions that move our country closer to conflict.

Sen. Bernie Sanders (I-Vt.) delivered a video response to President Donald Trump’s announcement Tuesday that he will pull the United States out of the Iran nuclear agreement.

Sen. Bernie Sanders (I-Vt.) delivered a video response to President Donald Trump’s announcement Tuesday, May 8, 2018, that he will pull the United States out of the Iran nuclear agreement. https://t.co/0WfXDXKAmW pic.twitter.com/mIvsNjxEc4

While Donald Trump killed the Iran deal, essentially ‘crawling’ behind Netanyahu and signaling the start of preparations for another US bloody war against the longtime target Iran, Bernie Sanders showed once again who should be the real leader of the United States. 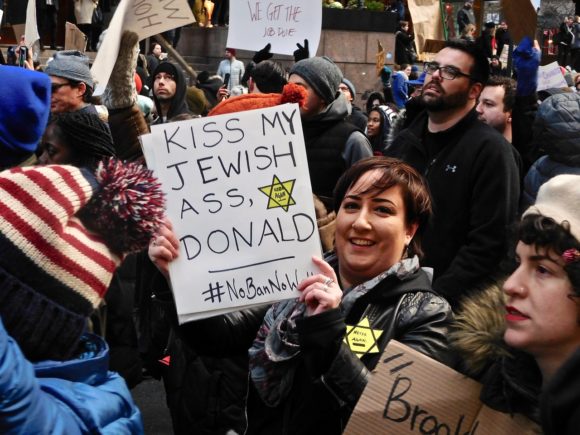 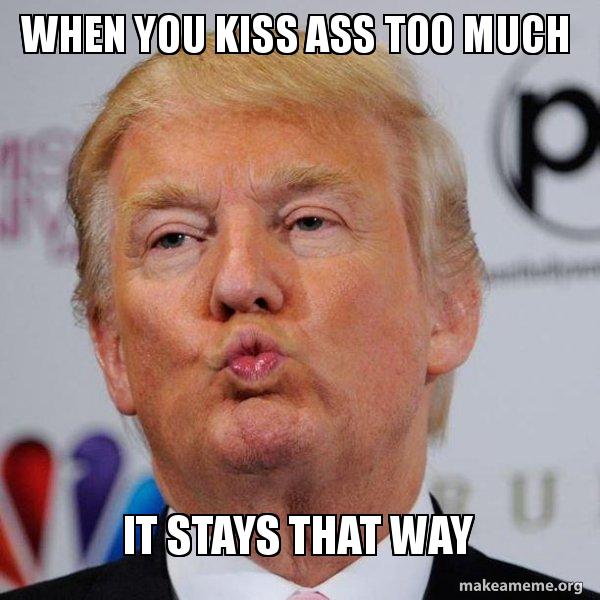 Sanders made a presidential appearance to prove again that he should be in charge, not only for the benefit of the US, but for the benefit and the security of the world. In contrast to the childish, irresponsible puppets who constantly play dangerous war games, Bernie said all the things that a true, responsible leader should say.

A piece of Bernie’s speech gives us a strong proof that he is not someone who will hesitate to name the sinister architects of the disastrous wars and deal with them, like the top bloodthirsty neocon, John Bolton: “I would remind you, that his [Trump’s] newly installed National Security Advisor, John Bolton, wrote an article a few years ago entitled ‘To stop Iran’s bomb, bomb Iran’. Now, Donald Trump seems to be creating his own excuse for doing exactly that.”

We urge Trump’s supporters, who still believe that fairy tale of the ‘anti-establishment’ Trump, to compare the two speeches, in order to realize that Bernie Sanders is the one that the US warmongering establishment sees as a real threat.

While Trump slipped towards the ordinary cliches and blatant lies of previous GOP presidential puppets, Bernie run full speed against the corporate Democrats and the liberal media who are in bed with the US military-industrial complex, just as the Republicans.

Does this presidential speech by Bernie marks a first step for a third, truly progressive political formation against the current bipartisan dictatorship?

President Trump’s speech today was the latest in a series of reckless decisions that move our country country closer to armed conflict. By reimposing nucleus sanctions on Iran and withdrawing from the joint comprehensive plan of action, otherwise known as the Iran nuclear agreement, President Trump has put our nation on a dangerous path. We should understand that the JCPOA is not just an agreement between the United States and Iran, but one negotiated alongside other members of the international community, including the United Kingdom, France and Germany along with China and Russia. The United Nations Security Council also endorsed it.

With today’s announcement, President Trump has also ignored the public statements of his own national security officials, like Joint Chiefs Chairman, Dunford, and Defense Secretary, Mattis, both of whom, have repeatedly said, that staying in the agreement is in the national security interests of the United States.

This agreement is supported by an overwhelming consensus of national security experts around the world and I would note that includes Israel. Last month, 26 former top ranking Israeli military and security officials signed a letter, urging the United States to maintain the agreement, stating unequivocally that the deal is working and that a US decision to pull out would undermine not just US security, but Israel’s security as well.

Withdrawing from the agreement could not only free Iran from the limits placed on its nuclear program. It would seriously harm the United States’ ability to negotiate future non-proliferation agreements such as the one with North Korea. Why would any country in the world sign such an agreement with the United States and make the necessary concessions if they thought that a reckless president might simply discard that agreement a few years later?

If we are genuinely concerned with Iran’s behavior in the region, as I am, this is the worst possible course of action. It will make addressing all of these other problems much more difficult. Unfortunately, I heard no strategy from President Trump today.

Ultimately, we must seek a better relationship with the Iranian people and a more constructive role for Iran in the region. Trump’s bellicose rhetoric today makes achieving those goals more difficult. It will strengthen the regime’s hardliners who are much more comfortable dealing with a hostile America than with a reasonable, peace-seeking one.

I am deeply concerned that that is exactly where President Trump is taking us with regard to Iran. And for anyone who tries to dismiss those concerns, I would remind you, that his newly installed National Security Advisor, John Bolton, wrote an article a few years ago entitled “To stop Iran’s bomb, bomb Iran”. Now, Donald Trump seems to be creating his own excuse for doing exactly that.

I would remind my fellow Americans that the road to the war in Iraq did not simply begin in 2003. It was laid down, brick by brick, over a number of years, with policy decisions that might have seen relatively small at the time, but that ultimately led us to the worst foreign policy blunder in the modern history of our country. The Iraq war has had enormous, unintended consequences that we are still dealing with today and will be dealing with for many years to come.

Real American leadership and real American power is not shown by our ability to blow things up, but by our ability to bring parties together, to forge international consensus around shared problems and then to mobilize that consensus to address those problems. That is what this agreement did. Unfortunately, today, President Trump put us on a very different, more dangerous path.

War Should Be the Last Option: Why I Support the Iran Deal

I support the Joint Comprehensive Plan of Action, the agreement that the U.S. negotiated with China, France, Germany, Russia, and the United Kingdom and Iran.

I support the agreement, and opposed the Republican’s resolution of disapproval, as I believe this approach is the best way forward if we are to accomplish what we all want to accomplish — that is making certain that Iran does not acquire a nuclear weapon – an occurrence which would destabilize the region, lead to a nuclear arms race in the area, and would endanger the existence of Israel.

It is my firm belief that the test of a great nation, with the most powerful military on earth, is not how many wars we can engage in, but how we can use our strength and our capabilities to resolve international conflicts in a peaceful way.

Those who have spoken out against this agreement, including many of my colleagues in the Senate, and those who have made every effort to thwart the diplomatic process, are many of the same people who spoke out forcefully and irresponsibly about the need to go to war with Iraq – one of the worst foreign policy blunders in the modern history of our country.

Sadly, people like former vice president Dick Cheney and many of the other neo-cons who pushed us to war Iraq were not only tragically wrong then, they are wrong now.

Unfortunately, these individuals have learned nothing from the results of that disastrous policy and how it destabilized the entire region.

I fear that many of my Republican colleagues do not understand that war must be a last resort, not the first resort.

It is easy to go to war, it is not so easy to understand the unintended consequences of that war.

As the former Chairman of the Senate Veterans Affairs Committee, I have talked to veterans from World War II to Iraq, and I have learned a little bit about what the cost of war entails.

In Iraq and Afghanistan we have lost 6,700 brave men and women, and many others have come home without legs, without arms, without eyesight.

Let us not forget that 500,000 veterans of the wars in Iraq and Afghanistan came back to their families with post-traumatic stress disorder and traumatic brain injury.

God knows how many families have been devastated by these wars.

And we should not forget the many hundreds of thousands of innocent Iraqi men, women, and children who died in that war, and those whose lives who have been completely destabilized, including those who are fleeing their country today with only the clothes on their back as refugees.

Yes, the military option should always be on the table, but it should be the last option.

We have got to do everything we can do to reach an agreement to ensure that Iran does not get a nuclear weapon without having to go to war.

The agreement calls for cutting off Iran’s pathways to the fissile materials needed for a nuclear weapon by reducing its stockpile of uranium by 98 percent, and restricting the level of enrichment of uranium to well below the level needed for weaponized uranium.

The agreement requires Iran to decrease the number of installed centrifuges by two-thirds, dismantle the country’s heavy-water nuclear reactor so that it cannot produce any weapons-grade plutonium, and commit to rigorous monitoring, inspection, and verification by the International Atomic Energy Agency.

Only after Iran has demonstrated to the international community its compliance with the tenets of the agreement – the U.S. and European Union will lift the sanctions that helped bring Iran to the negotiating table in the first place.

The agreement also contains a mechanism for the “snap back” of those sanctions if Iran does not comply with its obligations.

Does the agreement achieve everything I would like? Of course not.

But to my mind, it is far better than the path we were on with Iran developing nuclear weapons capability and the potential for military intervention by the U.S. and Israel growing greater by the day.

Let us not forget that if Iran does not live up to the agreement, sanctions may be reimposed. If Iran moves toward a nuclear weapon, all available options remain on the table. I think it is incumbent upon us, however, to give the negotiated agreement a chance to succeed, and it is for these reasons that I support the agreement.