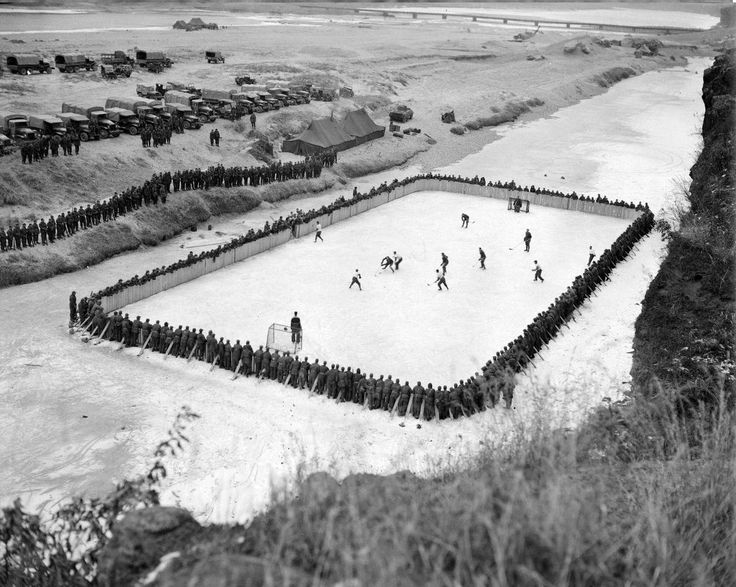 Members of two Canadian battalions: the Princess Patricia’s Canadian Light Infantry (PPCLI) and the Royal 22nd Regiment (R22R) turned the frozen Imjingang river into a makeshift ice rink for a hockey match (later on followed by matches between other (Canadian) unit teams). The match took place “in the sound of the heavy guns of nearby U.S. Army artillery”, just a short distance from the front lines of the struggle against Communist forces.

Sandbags constituted the boards. At this first game, there were no hockey uniforms. Players wore battle dress, no pads, no shin guards, no real equipment except skates and sticks. Eventually, makeshift hockey uniforms were acquired.

Spectators were Korean civilians, soldiers who had just come off front-line duty, or came from reserve units to watch the games at the “Imjin Gardens” arena. Their rifles were never far away, and a tank can be seen just past the tent, as an attack by Communist forces was an ever-present possibility. During this game, the 3rd Battalion Princess Patricias won 4-2 against the 1st Battalion of the Royal 22e Regiment.

Since 2013, the annual Imjin Hockey Classic is held. This is a re-enactment of the original event to honour the Korean War veterans and Canada’s long and continuing friendship with Korea.

« “One day I will find the right words, and they will be simple.” Jack Kerouac
American soldiers gargling salt water to try and protect themselves from the Spanish Flu epidemic, November 1918 »