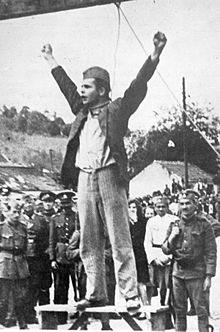 Stjepan Filipovic ( Opuzen , January 27, 1916 – Valjevo , May 22, 1942 ) was a Croatian communist and during the Ustanka in Serbia, the commander of the Kolubara Company Valjevo partisan detachment

The image of his heroic death has become a symbol of resistance to Fascism in the Second World War . It was proclaimed for the National Hero of Yugoslavia .

« Locals dancing on the wreckage of the downed USAF F117-A Nighthawk stealth plane ‘Something Wicked’, Buđanovci, Serbia, 28 March 1999
It seems hopelessly stupid for a high-ranking government official to fly, solo, to a country with which they are currently at war, yet that is exactly what Deputy Führer Rudolph Hess did when he flew to Scotland in 1941. Why on earth did he do this? »