Dr David King, director of the lobby group Human Genetics Alert, said: “We are concerned that this is a stepping stone to the creation of human clones.”

“Although it looks like that would be technically difficult, those with enough financial resources and the ambition to be the first to create a cloned child are likely to try.”

“There would undoubtedly be a market for human clones.”

Chinese Scientists Clone Monkeys In World First – Could Humans Be Next?

The scientists have been accused of paving the way to living human clones after creating two genetically identical monkeys.

Two identical long-tailed macaques called Zhong Zhong and Hua Hua were born eight and six weeks ago, making them the first primates, the order of mammals that includes monkeys, apes and humans, to be cloned from a non-embryonic cell.

Previously scientists have managed to ‘clone’ primates by splitting an embryo in half but the process was essentially artificial twinning rather than true cloning.

The BBC reports: Scientists say populations of monkeys that are genetically identical will be useful for research into human diseases.

But critics say the work raises ethical concerns by bringing the world closer to human cloning.

Qiang Sun of the Chinese Academy of Sciences Institute of Neuroscience said the cloned monkeys will be useful as a model for studying diseases with a genetic basis, including some cancers, metabolic and immune disorders.

“There are a lot of questions about primate biology that can be studied by having this additional model,” he said.

Zhong Zhong was born eight weeks ago and Hua Hua six weeks ago. They are named after the Mandarin term for the Chinese nation and people.

The researchers say the monkeys are being bottle fed and are currently growing normally. They expect more macaque clones to be born over the coming months.

“The work in this paper is not a stepping-stone to establishing methods for obtaining live born human clones,” he said.

Prof Darren Griffin of the University of Kent said the approach may be useful in understanding human diseases, but raised ethical concerns.

“Careful consideration now needs to be given to the ethical framework under which such experiments can, and should, operate,” he said.

Dolly made history 20 years ago after being cloned at the Roslin Institute in Edinburgh. It was the first time scientists had been able to clone a mammal from an adult cell, taken from the udder.

Since then many other mammals have been cloned using the same somatic cell nuclear transfer technique (SCNT), including cattle, pigs, dogs, cats, mice and rats.

This involves transferring DNA from the nucleus of a cell to a donated egg cell, which has had its own DNA removed. This is then prompted to develop into an embryo and implanted in a surrogate animal.

Zhong Zhong and Hua Hua are the first non-human primates cloned through this technique.

Short video of the cloned monkeys playing with each other – plenty more adorable, heart warming pics in the Reuters piece. 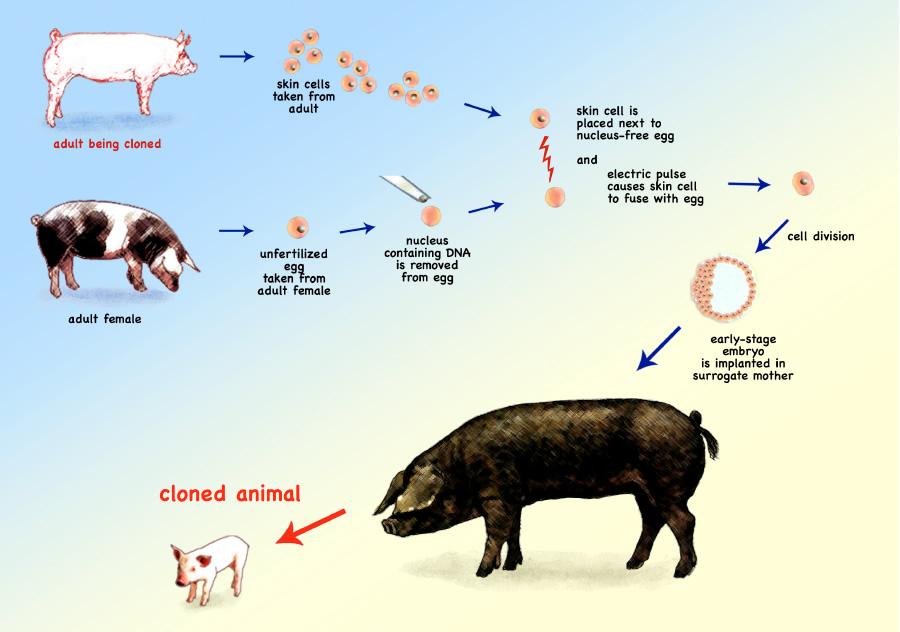 A quick thought on the science. People have been trying to clone monkeys without success for quite a while now. There was a fair bit of disappointment when people learned that cloning a monkey would not be nearly as easy as it was to clone a sheep (and even that was hard). The researchers used a number of epigenetic modulators to get the cloning to work, and even then it was quite inefficient – it took 127 eggs to produce two live macaque births.

The full research article, Cloning of Macaque Monkeys by Somatic Cell Nuclear Transfer is published in the journal, Cell.

This STAT piece does a nice job flushing out the study details in more lay terms.

China Is Building a Giant Animal-Cloning Factory to Feed the Masses – While the rest of the world sorts out its feelings about the safety & ethics of cloning animals for food production, China is charging ahead & building the world’s largest animal cloning factory, set to begin operations in 2016.

While the rest of the world sorts out its feelings about the safety and ethics of cloning animals for food production, China is charging ahead and building the world’s largest animal cloning factory, set to begin operations in 2016. (munchies.vice.com) 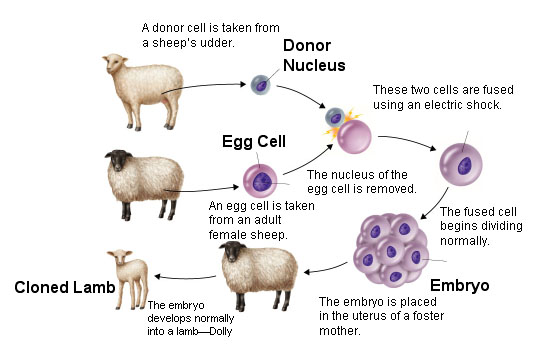 Therapeutic cloning technology may some day be used in humans to produce whole organs from single cells or to produce healthy cells that can replace damaged cells in degenerative diseases such as Alzheimer’s or Parkinson’s. Much work still needs to be done before therapeutic cloning can become a realistic option for the treatment of disorders.

A grief-stricken British couple whose boxer died in June 2015 successfully cloned their dead dog after taking its DNA to a commercial dog-cloning service. (stuff.co.nz)

A species of self-cloning crayfish was discovered in the German pet trade in the 1990’s. Every individual is female and genetically identical. There are no known natural populations. (en.wikipedia.org)

Previous Post: « “War is sweet to those who have no experience of it, but the experienced man trembles exceedingly at heart on its approach.” Pindar
Next Post: “In the midst of winter, I found there was, within me, an invincible summer.” Albert Camus »