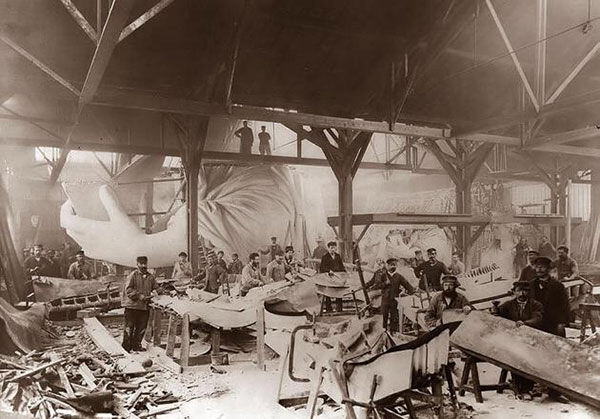 In 1865, a French political intellectual and anti-slavery activist named Edouard de Laboulaye proposed that a statue representing liberty be built for the United States. This monument would honor the United States’ centennial of independence and the friendship with France. French sculptor Auguste Bartholdi supported Laboulaye’s idea and in 1870 began designing the statue of “Liberty Enlightening the World.”

While Bartholdi was designing the Statue, he also took a trip to the United States in 1871. During the trip, Bartholdi selected Bedloe’s Island as the site for the Statue. Although the island was small, it was visible to every ship entering New York Harbor, which Bartholdi viewed as the “gateway to America.”

In 1876, French artisans and craftsmen began constructing the Statue in France under Bartholdi’s direction. The arm holding the torch was completed in 1876 and shown at the Centennial Exposition in Philadelphia. The head and shoulders were completed in 1878 and displayed at the Paris Universal Exposition. The entire Statue was completed and assembled in Paris between 1881 and 1884. Also in 1884, construction on the pedestal began in the United States.

To the United States

After the Statue was presented to Levi P Morton, the U.S. minister to France, on July 4, 1884 in Paris, it was disassembled and shipped to the United States aboard the French Navy ship, Isère. The Statue arrived in New York Harbor on June 17, 1885, and was met with great fanfare. Unfortunately, the pedestal for the Statue was not yet complete and the entire structure was not reassembled on Bedloe’s Island until 1886.

Once the pedestal was completed in 1886, the Statue was reassembled with surprising speed by a fearless construction crew – many of whom were new immigrants. The first piece of the Statue to be reconstructed was Alexandre-Gustave Eiffel’s iron framework. The rest of the Statue’s elements followed without the use of scaffolding – all construction materials were hoisted up by steam driven cranes and derricks. In order to sculpt the Statue’s skin Eiffel used the repoussé technique developed by Eugene Viollet-le-Duc. This technique was the process of molding light-weight copper sheets by hammering them onto the Statue’s hallowed wooden framework. The last section to be completed was the Statue of Liberty’s face which remained veiled until the Statue’s dedication. Although Fort Wood remained on Bedloe’s Island, it was not an obstacle in the design, construction, or reassembly of the Statue of Liberty. Instead, the star-shaped structure became a part of the Statue’s base – the pedestal sits within its walls.

On October 28, 1886, the statue of “Liberty Enlightening the World” was officially unveiled. The day’s wet and foggy weather did not stop some one million New Yorkers from turning out to cheer for The Statue of Liberty. Parades on land and sea honored the Statue while flags and music filled the air and the official dedication took place beneath the colossus “glistening with rain.” When it was time for Bartholdi to release the tricolor French flag that veiled Liberty’s face, a roar of guns, whistles, and applause sounded.