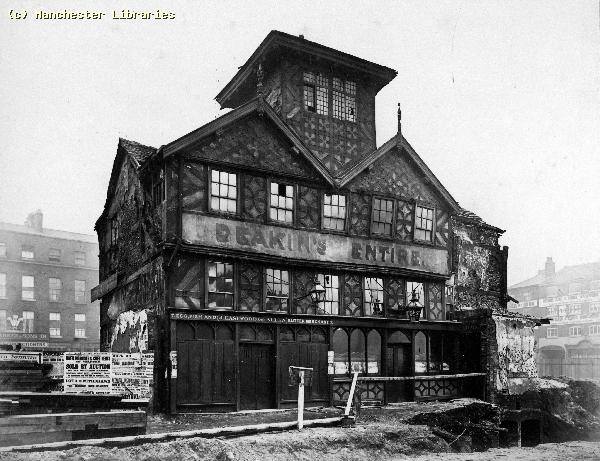 I’ve placed the relevant area of the [1850 Manchester Ordnance Survey map](https://i.imgur.com/G67bKGl.jpg) over Google Maps and, from the position of the Royal Exchange in this [photograph](https://i.pinimg.com/originals/b3/c4/05/b3c405767f31fb8549b9925a017071db.jpg), it looks like Smithy Door linked Deansgate and a lost street called Back Square, which ran adjacent to the path of what is now Exchange Street.

Deakin was Col. James Henry Deakin, who owned the Britannia Brewery. He stood for parliament in the constituency of Launceston, in the county of Cornwall, but was found to have bribed the electorate when he told them they were welcome to slaughter the rabbits on the land he had bought in the village; in an act of nepotism he nominated his son as his replacement and he was duly elected by the forgiving burghers of Launceston, who were presumably too full of rabbit pie to care less.

Previous Post: « Member of the Argyll and Sutherland Highlanders at Stirling Castle before being deployed to Flanders, 1914
Next Post: Ironworkers from Local 40 build the World Trade Center antenna in New York, 1979 »