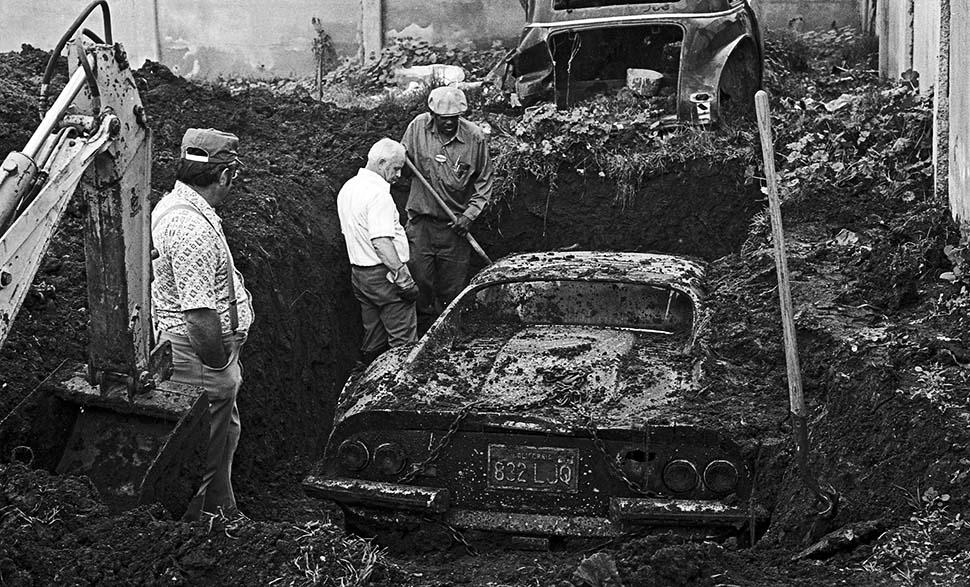 These photos, taken in February, 1978, show a Dino 246 GTS being unearthed from the front yard of a home in Los Angeles. The photos have been making the rounds online for years. But what’s the real story? How’d the Dino wind up underground, and where is it now?

In May, 1977, Sandra Ilene West, dressed in her best lace nightgown and seated upright at the wheel of her powder-blue 1964 Ferrari 330 America, was lowered into a concrete mausoleum — just as her last will and testament had instructed.

The 37-year-old widow of a Texas oilman had died of an accidental overdose of prescription drugs at her home in Beverly Hills. She and the car had been shipped to San Antonio for burial next to her late husband’s grave. After workmen placed the car, containing Ms. West, in its final resting place, two trucks poured cement into the bunker to discourage car thieves from digging it up.

The story of Ms. West’s subterranean Ferrari made national headlines that year, and in the decades that followed became part of Ferrari lore. But it wouldn’t be the only underground Italian sports car to capture the country’s attention in the late ’70s.

Nearly a year later, a group of kids were digging in the mud outside a house at 1137 W. 119th St. in the West Athens section of Los Angeles. Just below the surface, they struck something that felt like the roof of a car. They flagged down a sheriff’s cruiser.

Priscilla Painton, staff reporter for the Los Angeles Times, recorded what happened next for history. The story unfolded of a strange, four-wheeled treasure that two sheriff’s detectives would unearth from the front yard of a suburban house. When the story hit newspapers around the country, it reminded many of Ms. West’s odd Italian coffin, only this time the driver’s seat was empty.

Attacking the yard with a skip loader and a small team of men with shovels, detectives Joe Sabas and Lenny Carroll uncovered a dark, metallic green, Dino 246 GTS (serial number 07862) from the the sandy Los Angeles loam. In her article, which ran on Feburary 8, 1978, Painton wrote the car appeared to be in “surprisingly good condition,” and estimated its worth at around $18,000 (around $63,500 in inflation-adjusted 2011 dollars). Ferrari enthusiasts would later note the Dino had been fitted with the optional Campagnolo wheels and Daytona seats.

Investigators dug into the provenance of the Dino — license plate 832 LJQ — discovering it had been bought in October, 1974 by Rosendo Cruz of Alhambra, California. On December 7, 1974, Cruz had reported the car stolen, and the police report was kept on file at the Rampart division of the Los Angeles Police Department.

But the mystery remained. How did the Dino get there? The house’s then-current tenants (who’d only lived there for three months) offered no explanation, and none of the area’s residents said they’d had noticed anything odd happening at the house back in 1974. That struck detective Sabas as odd. After all, he joked, burying a Dino is “not like planting cabbages.” Whoever buried it had obviously expected to claim it later; they’d attempted to mummify it in plastic sheets and had stuffed towels into its intakes to keep the worms out.

With no leads, the case of the stolen, buried Ferrari fizzled soon after the car’s strange uncovering. Cops had years before declared the original incident a “righteous theft.” Farmers Insurance Group had agreed with the police and paid off a loss of $22,500 to the Dino’s legal owner, the Hollywood branch of the Bank of America. There was no more to be done. The unearthed Dino was returned to the insurance company, which would perform its own sorting-out process.

Photographer Michael Haering shot the story for the Los Angeles Herald Examiner. He remembered the case for its odd newsworthiness and coincidental connection to Ms. West’s Ferrari burial.

At the time we (the press) were puzzled and amused that a thief would bury a car, especially in his back yard. Many jokes we passed around at the time: One customer to car salesman, “Say, I’d like to buy a Ferrari, got any leads?” Salesman, “Let me get back to you, I’ll see what I can dig up.”

During that period there was a story of [Ms. West and her Ferrari coffin] and a question emerged if this could be accomplished legally. The press compared the two stories and played them off one another. Story drew lots of attention as a novelty. Then of course, it played itself out.

But that’s not the end of the story. Greg Sharp, writing for AutoWeek (March 3, 1986) picked up the trail of the dirty Dino long after its exhuming, and followed it back to the car’s pre-burial life.

Originally ordered by Modern Classic Motors in Reno, Nevada, her new destination, as one of a 10 model allotment, was Griswald Motors in the San Francisco Bay Area. She remained in the showroom on Market Street only two weeks before being purchased and either driven or dispatched by truck 400 miles south to Los Angeles. The buyer was yet another of America’s 46 Ferrari dealers, Hollywood Sports Cars. It is a dealership inevitably famous for its Ferrari sales to Frank Sinatra, Perry Como, Sammy Davis Jr., Pat Boone, William Holden, Jayne Mansfield, the Gabor sisters, poor Sharon Tate and Suzanne Pleshette. Hollywood Sports Cars is supported by more than the glamour colony, however, so late that October, for a price of $22,500, the Dino was purchased by a plumber as a birthday present for his wife.

The wife drove it a total of 501 miles. Then, on Dec. 7, the evening of their wedding anniversary, wife and husband visited the Brown Derby restaurant on Wilshire Boulevard where the plumber instantly was put on his guard by the anticipatory gleams in the eyes of the valet parkers. He left the Dino on Wilshire Boulevard. That other parties, too, had eyes for Dino became evident when the couple returned from their anniversary dinner and discovered her missing.

Then, as the story goes, it was found underground. But by mentioning the car had been lifted out in “surprisingly good” condition, the LA Times article inadvertently set off a frenzy, and the switchboard at Farmers lit up with prospective buyers. Insurance investigator Tom Underwood decided it might be appropriate to to take a look and see if the Dino’s condition matched the reportage. It didn’t.

The Dino’s 21 layers of paint (14 primer, 7 paint) were freckled with white pox. Rust had eaten cancerous holes in the Pininfarina body and then spread everywhere, including inside the elegant leather interior (the dumb ass thieves brilliantly stuffed towels between the windows, then neglected to remember to roll up the windows all the way).

Erosion had wasted the wheels and chewed the camshaft covers. Both twin exhausts were plugged solid with mud. The mauling that the sorry Dino had absorbed being dragged out of the hole must have been horrible, too, because the hood of her engine compartment was partially crushed, there were terrific scratch marks and gouges across her roof, and the windshield was smashed.

It all was so mournfully sad, and so hopelessly bad, that Tom Underwood was able to wrap up his investigation in record time. Any idea that somebody outside of the Ferrari factory itself could restore the Dino to anything approaching its original state seemed ludicrous.

By this time, Farmers was receiving so many calls about the car, company officials feared a public-relations crisis. Underwood had an idea. He’d put the car on public display. Farmers trucked the sad Dino to a private warehouse in Pasadena, where it remained on view for two weeks. The company invited viewers to submit sealed bids. But the plan backfired. Scalzo wrote, “After two weeks of sordid pawing, she was returned to Farmers missing almost everything not bolted down, including her oil dip stick. Few legitimate bids were submitted.”

And so, Underwood invited the original callers to re-submit bids. Few did, but it took only one to sell it. A high bid of between $5000 and $9000 made the Dino the property of a young mechanic with his own garage on Burbank Boulevard in the San Fernando Valley. After a new alternator and distributor, he even got the Dino to start. And then the cylinder rings stuck. Sharp puts a cap on the story.

Afterward the young mechanic moved the Dino and himself out of the garage on Burbank Boulevard without leaving a forwarding address, Then he or parties unknown perfectly completed the Dino’s impossible restoration. Duly registered and newly licensed [with vanity tags reading “DUGUP”] by California’s Department of Motor Vehicles, the buried Dino next was returned to what I hope is high speed play out on L.A.’s kinking boulevards and across our endless and flat out four and five laners.

More than 30 years after it was found, the dirty Dino remains unlisted on any Dino registry. That’s not to say it’s not somewhere out there. Indeed, it just may be.