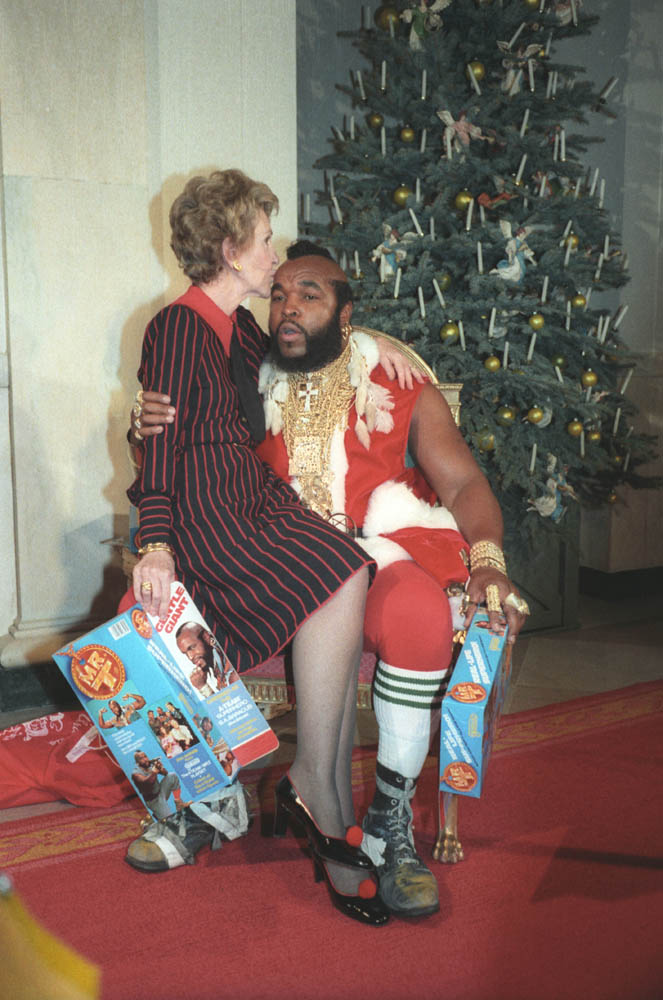 First Lady Nancy Reagan gives a kiss while sitting on lap of actor Mr. T who is dressed as Santa Claus 12 December 1983

Mr. T, whose birth name is Lawrence Tureaud, was listed as one of the notable invited guests for the funeral in California today, which is more than 30 years after he first met Nancy Reagan.

The unlikely friendship between a former bouncer-turned-actor and an actress-turned-first lady started after she asked him to be involved in her drug-prevention program, Just Say No.

But the program itself wasn’t the first time they came into contact, according to the 63-year-old actor. Mr. T said he was first invited to the White House by the Reagans in December 1983 and then asked to help her with the Just Say No program.

That December visit was particularly memorable because it resulted in one of the best-known photos of the pair.

The Reagans regularly asked celebrities to come to the White House and dress up as Santa for Christmas parties.

Comedian Rich Little and weatherman Willard Scott were among the other celebrities asked later on, but Mr. T was the man with the big white beard in Christmas 1983.

“I was one of the wildest Santa Clauses they ever had,” he said in a recent interview. “I had my cut-off sleeves. I had my combat boots on.”

At one point in the night, Nancy Reagan hopped up on his lap and gave him a kiss on the head, lending itself well to a cute photo moment.

They then started to work together in her effort to stop child drug use.

Previous Post: « What happened to the inhabitants of Roman cities after the fall of the Roman Empire who now found themselves living in a barbarian kingdom.
Next Post: “We are torn between nostalgia for the familiar and an urge for the foreign and strange. As often as not, we are homesick most for the places we have never known.” Carson Mccullers »