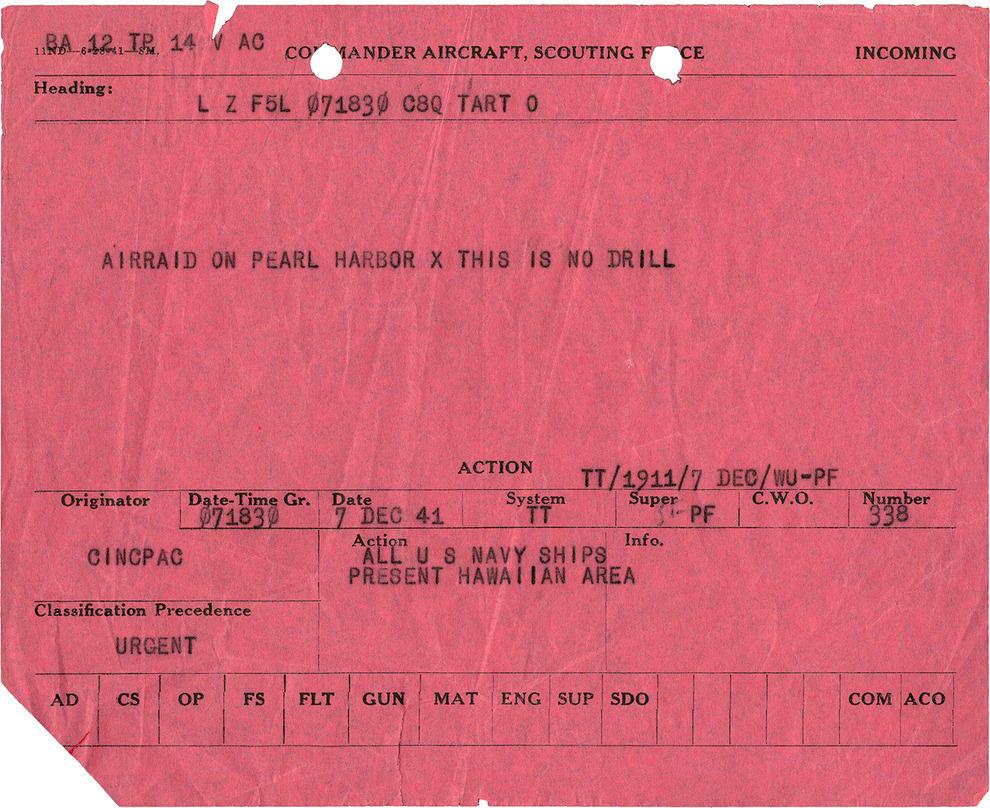 Today is the 76th anniversary of the first major foreign air attack on American soil in history. Almost 2,500 American citizens died that day and brought our country into the midst of WWII.

Japan intended the attack as a preventive action to keep the U.S. Pacific Fleet from interfering with military actions they planned in Southeast Asia against overseas territories of the United Kingdom, the Netherlands, and the United States. Over the next seven hours there were coordinated Japanese attacks on the U.S.-held Philippines, Guam and Wake Island and on the British Empire in Malaya, Singapore, and Hong Kong.

The attack commenced at 7:48 a.m. Hawaiian Time (18:18 UTC).[nb 4][13] The base was attacked by 353 Imperial Japanese aircraft (including fighters, level and dive bombers, and torpedo bombers) in two waves, launched from six aircraft carriers.[14] All eight U.S. Navy battleships were damaged, with four sunk. All but the USS Arizona were later raised, and six were returned to service and went on to fight in the war. The Japanese also sank or damaged three cruisers, three destroyers, an anti-aircraft training ship,[nb 5] and one minelayer. One hundred eighty-eight U.S. aircraft were destroyed; 2,403 Americans were killed and 1,178 others were wounded.[16] Important base installations such as the power station, dry dock, shipyard, maintenance, and fuel and torpedo storage facilities, as well as the submarine piers and headquarters building (also home of the intelligence section), were not attacked. Japanese losses were light: 29 aircraft and five midget submarines lost, and 64 servicemen killed. One Japanese sailor, Kazuo Sakamaki, was captured.

The surprise attack came as a profound shock to the American people and led directly to the American entry into World War II in both the Pacific and European theaters. The following day, December 8, the United States declared war on Japan,[17][18] and several days later, on December 11, Germany and Italy declared war on the U.S. The U.S. responded with a declaration of war against Germany and Italy. Domestic support for non-interventionism, which had been fading since the Fall of France in 1940, disappeared.

There were numerous historical precedents for unannounced military action by Japan, but the lack of any formal warning, particularly while negotiations were still apparently ongoing, led President Franklin D. Roosevelt to proclaim December 7, 1941, “a date which will live in infamy”. Because the attack happened without a declaration of war and without explicit warning, the attack on Pearl Harbor was later judged in the Tokyo Trials to be a war crime…. Wikipedia

History is a lie. Pearl Harbor was not a surprise but they rewrote history to pretend that it was. Hilo Tribune Herald warned of Japanese strike a week before it happened.

TheMadQuixotician: This is very misleading. I’ve read the entire Wohlstetter Report so I’ve got a bit of insight into the situation. They were receiving “war warnings” at Pearl Harbor every week or two for several months. So much so that it created an environment where the warnings stopped becoming warnings simply through routine.

They knew they could be attacked at any moment, yes, but to say they rewrote history is a stretch in my opinion.

If you’re looking for someone to blame, I’d put the blame on Kermit Tyler, the man who just wanted to finish his damn shift and all but entirely disregarded the notification to the watch tower until it was already too late.

Union_Special: It was just like 911. An attack on US soil to manufacture the consent of the American people to engage in foreign conflicts.

Afrobean: Yup, same as with 9/11. They knew it was coming. They wanted it.

TorontosaurusHex: Totally. A Serbian MI6 agent personally related the info of upcoming attack to Hoover, but Hoover didn’t like the guy. So he didn’t take it seriously. 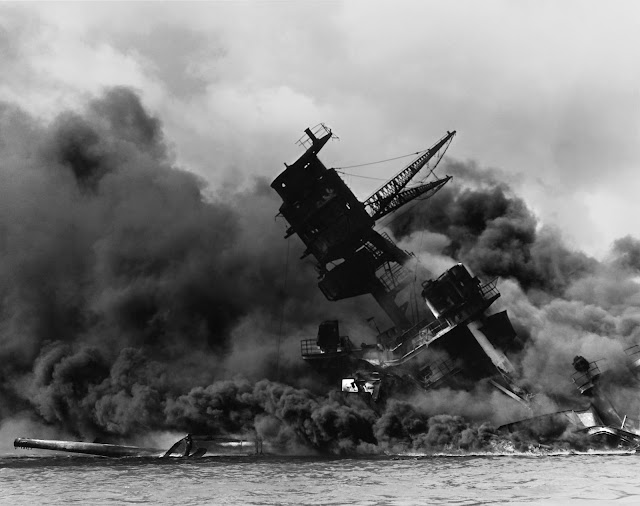 President Franklin D. Roosevelt would call the attack on Pearl Harbor,”a day that shall live in infamy.”

UberSARS: Not only that. They had it on radar, but “assumed” it was an incoming squad of bombers from California… it turned out not to be.

Smuffers: I learned in school that every single aircraft carrier, the most important and expensive part of the American fleet which would take time to reproduce for war, was conviently moved out of the harbor in time for the attack. I’m not sure the numbers but it was around 50 aircraft carriers. Someone fact check that. But if they had been caught in the attack, we would not have been able to mobilize our troops for war.

RPDC01: Pearl Harbor was a “surprise” in the same way it’s a “surprise” when you wiggle your finger right next to your little brother’s ear and say “I’m not touching you” and he reacts by hitting your hand.

G_Wash1776: The biggest thing to me about Pearl Harbor is that when we are taught about it throughout grade school it’s always from the perspective that it was completely unjustified. When in reality the United States had placed an oil embargo on Japan months prior in June, which is an act of war. It’s crazy how little people truly know of history and how easily an entire nation can be mislead.

NightAngel1981: I think that the biggest proof here is how the perpetrators of the attack think about it. I’ve lived in Japan, and know first hand that the Japanese are sorrowful and shamed about how they did what they did. That speaks more than the conspiracies from an American perspective.

NoLifeJustNet: Actually, even Stalin know that German will strike, but he was sure they wont. The same situation with Pearl Harbor.

cunolle: American leaders were looking for a way….any kind of way into WWII. There was so much money to be made.

The American public was vehemently against it, since the war was on the other side of the world and didn’t involve them.

The people in power were desperate for a way to get involved and have the public back them. The public wanted nothing to do with it.

Pearl Harbor was the way.

The Japanese (if you read a history book not written by Americans) were not interested in a war with the USA.

They were pushed into a corner and after all talks failed, they finally bombed Pearl Harbour.

It was a god send for America. The USA wouldn’t be the superpower it is today if it had not been involved in WWII. 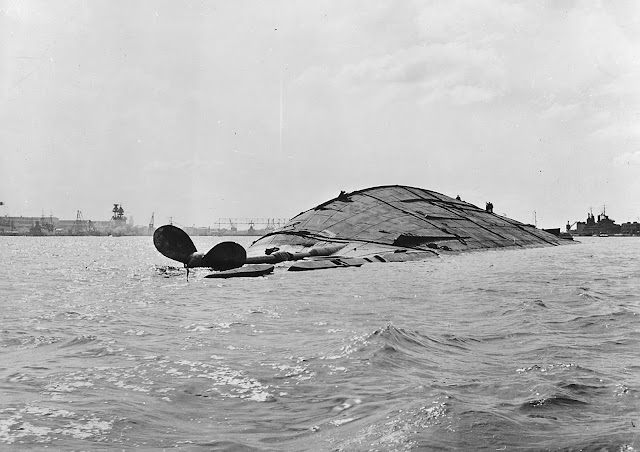 USS Oklahoma lies on its side; hundreds of men were trapped inside Pearl Harbor

On December 7, 1941 the Imperial Japanese Navy attacked the U.S. naval base at Pearl Harbor. They wanted to weaken the Pacific Fleet to prevent a possible military intervention in their actions. Since this day, the United States joined the World War II. On December 8, the United States declared war on the Empire of Japan. 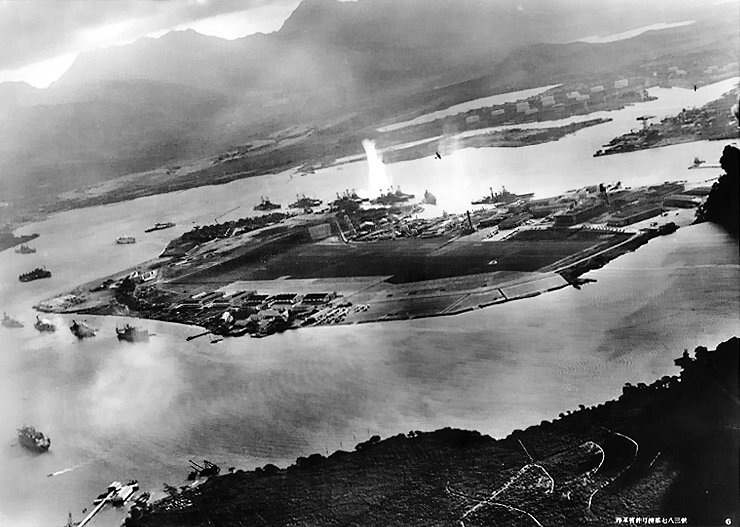 Photograph taken from a Japanese aircraft at the beginning of the attack
In the attack, deployed in two parts involving fighter jets, bombers and torpedo boats, eight American battleships were damaged, four of them came to sink. 2,402 Americans died and 1,282 were injured. 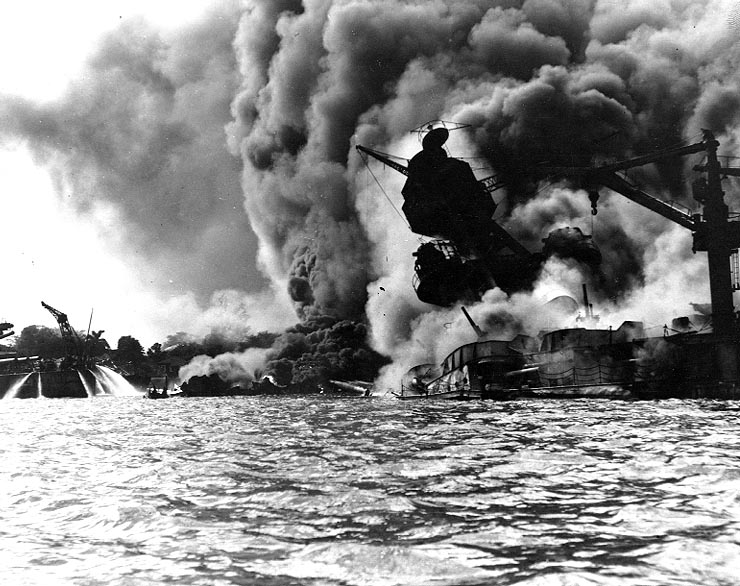