I know that they had to do a lot of calculations in order to predict planes movements, including things like temperature, wind speed, flight time, enemy movements. and i also know that radar was used for these calculations (at least i think I’m know…).

the reason i ask is because I’m creating a 3D environment of a flak gun emplacement, and i need some other props to populate the scene. I’m assuming they would have a table nearby the gun maybe with a radio in order to either receive their orders or something similar, so any help would as to what they would have with them in the trench would be appreciated.

the_howling_cow: In the United States Army during World War II, the primary antiaircraft gun was the [90 mm gun M1](https://imgur.com/a/Edsyj). Other variants of the M1 were developed, including the M1A1, with a spring rammer, the [M2](https://imgur.com/a/16yL1), which had a shield to protect its crew and could be used as a weapon against enemy ground forces, and the M3, which was heavily modified to be mounted on tank or tank destroyer chassis. The U.S. Army made distinctions between antiaircraft weapons; quad .50 caliber machine guns, 37 mm guns, and 40 mm guns were referred to as “automatic weapons,” while larger semiautomatic pieces such as the 3-inch, 90 mm, or 120 mm guns were referred to as “guns”). 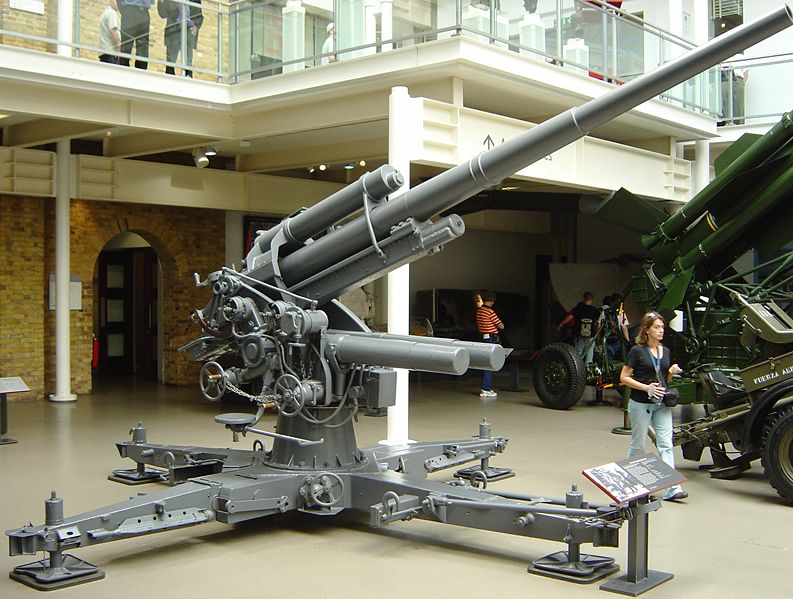 Each firing battery was divided into a battery headquarters and a firing unit; each firing unit had four gun sections. The U.S. had several different types of gun-laying radar and guns, and the types of gun battalion, while basically the same, were distinguished based on their equipment

The firing units within the Type A, B, and C gun batteries were organized basically in the same way. Each unit had a range detection section, four gun sections of one gun each (each gun having a crew of sixteen), and a “machine gun and executive officer’s section,” which acted as a sort of miniature ground and air defense unit (using its water-cooled .50 caliber machine guns to engage ground or air targets which moved too fast or got too close for the 90 mm guns) and also served as the authority of the firing battery. Each firing unit had 113 men and 3 officers.

* h: Not authorized when director M9 is issued

* i: Authorized only when radio set SCR-584 is issued

* j: Authorized only when radio set SCR-545 is issued

In normal, static conditions, antiaircraft artillery gun units in the U.S. Army were usually interconnected by [radio nets](https://imgur.com/a/UN3Md) that went from the individual guns of each firing battery, to the director, to the headquarters of each battery, and all the way up to the antiaircraft artillery brigades and groups, which were the highest level of organization utilized. Each antiaircraft group usually had a gun battalion, an automatic weapons battalion, and a searchlight battalion; several groups were combined into antiaircraft artillery brigades. In mobile or fluid conditions, radio communications were used; each firing battery was well-equipped with a BD-72 switchboard, an SCR-593 radio (intended for reception of alert or warning orders and messages by antiaircraft units), and 20 EE-8 field telephones.

The Signal Corps radar was used to track incoming aircraft until they got in range. The SCR-584 was particularly sensitive, having a secondary purpose of being able to detect individual moving vehicles on the ground at distances of upwards of ten miles, good for directing fighter-bomber sorties. The height finder was an optical or radar unit that was used to find the altitude of a target aircraft by purposes of sight, or by bouncing a beam off of it.

> a. The Height Finder M2 is a portable self-contained range finder
of 13 1/2-foot base length, employing the stereoscopic principle of range
finding. Theoretically it consists of a pair of high power telescopes
combined into one instrument containing optical means of measuring
slant range.

> b. The principle involved is the measurement of the small angle
between two rays of light from the target that enter the widely
separated windows of the height finder. This measurement is merely
the scientific extension of a person’s ability to judge the distance of
nearby objects by virtue of the rays of light entering the two eyes.
The height finder actually serves the purpose of optically separating
the observer’s eyes to 13 1/2 feet.

The gun director was a mechanical computer that calculated firing solutions for a gun when parameters such as the ballistic data of projectiles being used, the size, distance, and speed of a target aircraft, and its altitude as obtained from the height finder were plugged into it. As seen above, the firing section of each antiaircraft artillery gun battery was provided with one height finder, one director, and one Signal Corps radar. Depending upon the situation, U.S. antiaircraft artillery gun units could employ several types of firing against enemy aircraft;

> (1) Continuously pointed fire. This is the normal method of AAA gun fire. Fire control instruments track the target and transmit firing data continuously to the guns. Fire is continuous and at maximum accurate rate.

> (2) Predicted concentrations. A method of fire by which the future position of the target is predicted by present position plots. A stipulated number of rounds are fired at each predicted point. This is an emergency method of fire control.

> (3) Barrage fire. A method of fire having for its purpose the placing of a barrier or curtain of fire across the probable course of the enemy aircraft. Fire, based upon predetermined firing data, is directed at preselected bar-
rage points for a stipulated number of rounds or period of time. This is an emergency method of fire control.

Previous Post: « Gavrilo Princip outside court after the killing of Franz Ferdinand and his wife, 1914
Next Post: A woman standing on Omaha Beach overlooking the wrecks of several ships that were used on D-Day, 1947 »