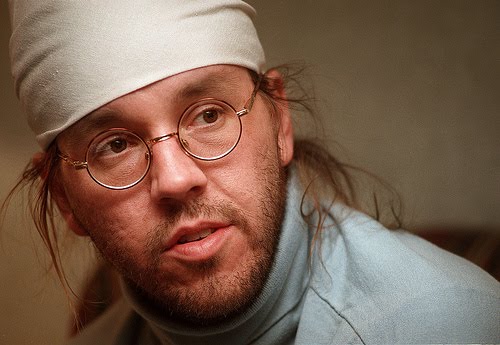 David Foster Wallace was an American writer and university instructor of English and creative writing. His novel Infinite Jest was listed by Time magazine as one of the hundred best English-language novels published between 1923 and 2005. Wikipedia
Born: February 21, 1962, Ithaca, New York, United States
Died: September 12, 2008, Claremont, California, United States
Spouse: Karen L. Green (m. 2004–2008)
Movies: Brief Interviews with Hideous Men
Quotes
Fiction’s about what it is to be a human being.
This is nourishing, redemptive; we become less alone inside.
The interesting thing is why we’re so desperate for this anesthetic against loneliness.

Previous Post: « The Soviets opening the gates of the Auschwitz concentration camp after liberating it exactly 73 years ago. January 27, 1945
Next Post: Canadian and German wounded help one another through the mud during the capture of Passchendaele. November, 1917 »