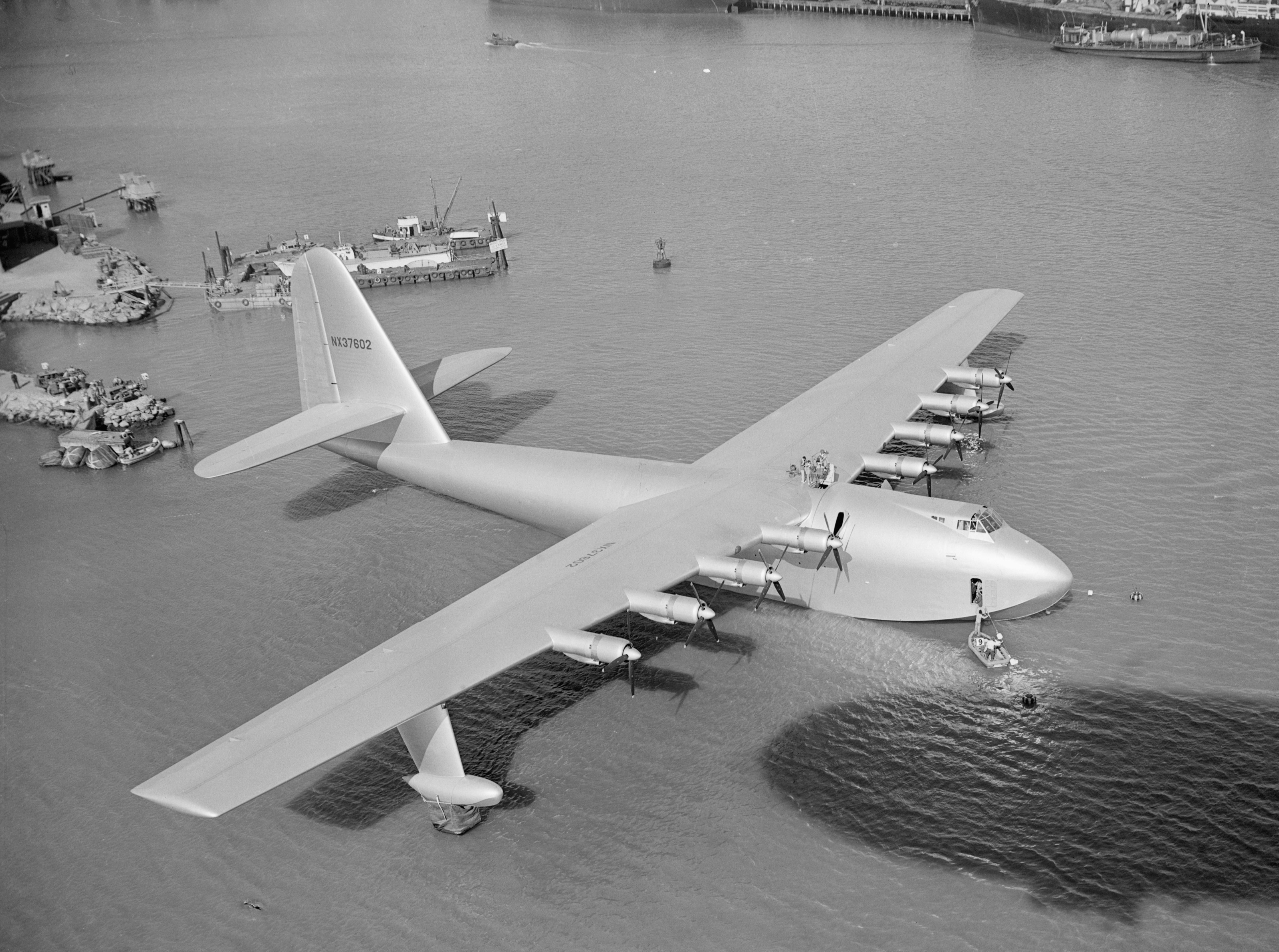 At the center of our museum stands the original Spruce Goose. Built entirely of wood due to wartime restrictions on metals, this massive airplane stands as a symbol of American industry during World War II. Learn more about the history, first flight, and legacy of this mammoth plane.

The largest wooden airplane ever constructed, and flown only one time, the Spruce Goose represents one of humanity’s greatest attempts to conquer the skies. It was born out of a need to move troops and material across the Atlantic Ocean, where in 1942, German submarines were sinking hundreds of Allied ships. Henry Kaiser, steel magnate and shipbuilder, conceived the idea of a massive flying transport and turned to Howard Hughes to design and build it. Hughes took on the task, made even more challenging by the government’s restrictions on materials critical to the war effort, such as steel and aluminum. Six times larger than any aircraft of its time, the Spruce Goose, also known as the Hughes Flying Boat, is made entirely of wood.

Originally designated HK-1 for the first aircraft built by Hughes-Kaiser, the giant was re-designated H-4 when Henry Kaiser withdrew from the project in 1944. Nevertheless, the press insisted on calling it the “Spruce Goose” despite the fact that the plane is made almost entirely of birch.

The winged giant made only one flight on November 2, 1947. The unannounced decision to fly was made by Hughes during a taxi test. With Hughes at the controls, David Grant as co-pilot, and several engineers, crewmen and journalists on board, the Spruce Goose flew just over one mile at an altitude of 70 feet for one minute. The short hop proved to skeptics that the gigantic machine could fly.

Perhaps always dreaming of a second flight, Hughes retained a full crew to maintain the mammoth plane in a climate-controlled hangar up until his death in 1976.

The Spruce Goose was kept out of the public eye for 33 years. After Hughes’ death in 1976, it was gifted by Hughes’ Summa Corporation to the Aero Club of Southern California. The Aero Club then leased it to the Wrather Corporation, and moved it into a domed hangar in Long Beach, California.

The Disney Company acquired the Wrather Corporation, thus taking over the lease of the Spruce Goose. Evergreen subsequently bought the aircraft from the Aero Club.

In 1992, Evergreen Aviation & Space Museum co-founders Michael King Smith and Delford M. Smith submitted the winning proposal to provide the aviation icon with a proper home. The Flying Boat was disassembled and transported by barge up the West Coast, then up the Columbia and Willamette Rivers, to Portland, Oregon. It remained there for several months, until water levels permitted the huge structures to safely pass under the Willamette’s many bridges.

Finally, in February 1993, the aircraft was transported by truck for the last 7.5 miles to McMinnville, Oregon. Temporary hangars were built as housing for the aircraft, while volunteers worked on the aircraft’s restoration. In 2001, re-assembly of the Hughes Flying Boat was completed in its new home.
___________

Just got back a few days ago from the Evergreen museum where this is located. Really cool place, one of the best museums I have been to for sure. There are tonnes of old WW1 and WW2 era planes, those cool domed helicopters from the 50s, a few random tanks, an SR71 blackbird, rockets, couple drones. Loved it. « New York City street corner. 1956
“Love your parents. We are so busy growing up, we often forget they are also growing old.” Unknown »