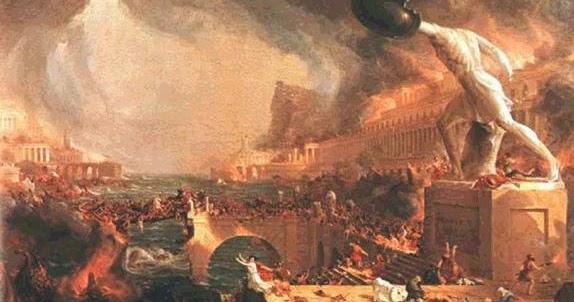 Here’s the really fun thing about the fall of Rome: Depending on your political beliefs, it was caused by [insert “Stuff I do not like in out modern world” here]. Some people blame immigration, others blame loss of virtue and morality, others blame the elites, or taxation, or… [you name it.](http://crookedtimber.org/2003/08/25/decline-and-fall/)

Anyway, if you’re looking for a consensus on the causes of the fall, or even on the question of whether “the fall of Rome” is a useful concept at all. (Some historians argue that the whole “fall” narrative was only invented after the fact when Justinian needed a good excuse to go invade Italy and Africa, and that in actual fact the Roman way of life just went on and only gradually changed over time.)

[I wrote a few big posts on the subject a while ago](https://www.reddit.com/r/AskHistorians/comments/4oelte/how_accurate_is_the_popular_view_that/), though that questioner was coming from the opposite angle.

All that said, “Loss of Infastructure” seems a bit of a stretch. Unless by “loss of infrastructure” you mean “The Vandals captured Carthage, the fleet that used to bring the grain to feed Rome now brings Vandals to sack it, the fleets we sent to recapture it were burnt, and now there no longer is any tax to pay the army so the local warlords, nobles and former generals and officials are just doing what they want.” (The loss of Roman Africa is considered by many historians to be the final nail in the coffin of central Roman authority, though whether it was a symptom or a cause, an inevitability or simple contingency, and whether it actually caused any meaningful change in the lives of most peoples, are all questions you will find more debate on.)

I’m also not quite sure what they mean by “distance between the common folk and the rich.” There was great inequality in the Roman empire, and there is evidence that this increased in late antiquity. Still, it’s not like there was any particular closeness between the rich and common people during the empire’s heyday.

I can think of a few things they might be driving at. Were they perhaps referring to the changes in civic culture in late antiquity, where elites ceased to invest heavily in public works and became less willing to take on civic functions? That was a thing, and there’s quite a lot of debate on what caused it and what effects it has, and I can expand on it if you want to.