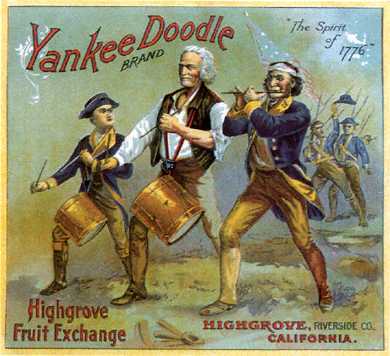 I had been told it referred to a fashion trend in Europe, but I found a reddit post that made an alternate assertion:

Just a little wrong. While macaroni was an expression for dandyish men, it also refers to the decorative insignia on the front of a hat, particularly in a military context.

In the song Yankee Doodle, the word macaroni specifically refers to the second meaning, because the man in the song is decorating his hat, but using a mere feather rather than complicated embroidery.

As a military song, this also pokes fun at the under-equipped American soldiers, who often lacked formal uniforms.

The song does not make any direct comment about whether or not the man is sufficiently dandyish to be considered a macaroni. This is clear from the grammatical structure “called it [the feather] macaroni.” However, the slang meaning of macaroni would have been well known, and could very likely be implied.

chocolatepot: I’m not really sure where that Reddit poster got that idea, because I have never heard anyone refer to the military insignia on a hat as “macaroni”. The etymology that has now become well-known is, in fact, true. (And how often does that happen?)

In the late seventeenth, eighteenth, and early nineteenth centuries, it was fairly common for wealthy young British gentlemen to take a tour of “the Continent”, meaning Europe – specifically or especially France and Italy (sometimes also Switzerland and Germany). While interest in beautiful or interesting scenery was becoming more important to refinement in the second half of this period, these gentlemen largely intended to visit the great cities of these countries to take in their arts and culture, learn about what made them important, and acquire polish. You can see this in, for instance, Thomas Nugent’s 1778 [The grand tour, or, A journey through the Netherlands, Germany, Italy and France](https://books.google.com/books?id=rCZOAAAAYAAJ), where the table of contents lists:

>I. A Description of the principal Cities and Towns, their Situation, Origin, and antient Monuments

>II. The public Edifices, the Seats and Palaces of the Princes and Nobility, their Libraries, Cabinets, Paintings, and Statues

>III. The Produce of the Countries, the Customs and Manners of the People, the different Coins, their Commerce, Manufactures, Learning, and present Government

>IV. An exact List of the Post routes, and of the different Carriages by Water and Land, with their settled Prices

The proper early modern British gentleman was supposed to be conversant with the important European cultures (while not preferring them to his own, of course), and to know who was who and what was what in them. He would visit the same cities as other young British men, typically forming the same opinions or parroting the ones that were already displayed in conventional travelogues of the day, allowing him to be a part of refined British male culture on his return.

Macaroni pasta was already in existence at this time, although it was not typically eaten in Britain. So when the “Macaroni Club” formed out of young men who had seriously enjoyed their Grand Tours and intended to continue their preference for Italian styles at home, the name was significant in that it signaled how exotic the club members’ tastes were as well as automatically shutting out those who had not been on the Tour or who had not gone as far as Italy and would not have any clue what the word meant. (It’s also the case that the Tour was meant to make men *aware* of what was happening elsewhere in the world, but not to make them prefer France, Italy, etc. to their native Britain, which was obviously the best country in the world.) The earliest reference we have to it is a letter by Horace Walpole in 1764, where he says that it is “composed of all the travelled young men who wear long curls and spying-glasses”. The epithet then was transferred to the young men themselves in a derogatory fashion.

>fully qualified, and determined, I see, to shew the world what a contemptible creature an Englishman dwindles into, when he adopts the vices and follies of other nations.

The foppish macaroni was totally at odds with the perhaps more middle-class notion of English masculinity at the time – someone down-to-earth, not terribly interested in fashion, sensible and restrained, and more inclined to be oversexed than undersexed. (Oversexed with regard to *women*, that is. There were certainly veiled accusations of same-sex love and intercourse among macaronis, although it was not seen as a universal aspect of macaronihood. Many fictional macaronis wooed women passionately, but often proved to be a cold fish in the bedroom.) Macaronis had a “delicacy of manners” that combined with their over-attention to dress to make them more like women than men, a “neuter gender” that was sometimes referred to as “it”. That being said, the stereotype at play here was older than the macaronis: the archetype of the over-fashionable man had been appearing in theater and fiction since the early seventeenth century, where he was often called a “gull” or “gallant”. The more effeminate fop took over by the end of the century, and the macaroni can be seen as a specific subtype of fop, one that had an Italian flavor.

With all of the satirical information and characterizations based on long-held tropes out there, it’s hard to sort through for the facts of actual behavior associated with the macaronis. Did they wear tall wigs with tiny hats on top, or did their hair just [bump up](https://www.pinterest.com/pin/228065168601954978/) enough [at the *toupet*](https://www.pinterest.com/pin/228065168601960150/) to look strange to [other Englishmen](https://www.pinterest.com/pin/228065168599966144/)? Did they have “vast shoe buckles” and “huge [coat] buttons”, or is that likewise an exaggeration of something that a modern viewer might not even notice as out-of-the-ordinary for the period? Fashion studies has long had a problem with taking satirical representations or polemical complaints as relatively straightforward critiques of fashionable dress, and it seems likely that the macaronis were not, in fact, walking around the streets looking like clowns, but were a cliquey, elitist group that irritated less fashionable observers with their lack of patriotism and apparent unconcern with external standards of masculinity. To hearers of “Yankee Doodle”, the obvious interpretation of “called it macaroni” was that the Yankee was enough of a yokel to think a feather was all it took to be macaroni.