The word Islamophobia is generally perceived as a negative term like Racism.

While racism is indefensible because it is basically going against the principle of equality. Islamophobia is not quite the same as there is element of violence that is not imagined, but real. Real threats like terrorism that is affecting the world’s peace and harmony.

Now, how do “good” Muslims distance themselves from tragic crime such as this one? Hi, my name is Arminas Pileckas. I’m a 15-year old student in Sweden. I protected a girl in my class who was sexually harassed by a 14-year old Syrian refugee. The Syrian killed me by stabbing me in the back because I insulted his honor. Neither the boy or his parents are facing any charges.

Do good Muslims protest this hideous crime like how they protest the Travel Ban?

Why wouldn’t activist like Linda Sarsour stand up against the perpetrator?

The Women’s March put Linda Sarsour, one of the highest-profile Muslim American activists in the country after climbing the ranks of New York City politics, squarely on the national stage.

Many of her accusers say she is an advocate of sharia, or Islamic law.

Last week, Ayaan Hirsi Ali, a Somali-born American author and critic of Islam, appeared on Fox News and called Sarsour a “fake feminist” and questioned her defense of sharia law.

“There’s no principle that demeans, degrades and dehumanizes women more than the principle of sharia law,” she said.

And the Syrian boss himself admitted some of his people are real terrorists?

“You can find it on the Net,” Assad went on: “Those terrorists in Syria, holding the machine gun or killing people, they [appear as] peaceful refugees in Europe or in the West.” He said he couldn’t estimate how many there might be, but he added that “you don’t need a significant number to commit atrocities.” He noted that the 9/11 attacks were pulled off by fewer than 20 terrorists “out of maybe millions of immigrants in the United States. So it’s not about the number, it’s about the quality, it’s about the intentions.”

That said, is Islamophobia justified?

US Marine on Trump’s Travel ban – “Something to think about”

Trump Says He Is Considering Signing New Order on Immigration

Gregg Jarrett: It’s no surprise that bad judges got it wrong on Trump’s executive order

Fox News
The best you can say about the 9th Circuit Court’s decision upholding the temporary halt to President Trump’s immigration ban… is that the court is consistent. Consistently wrong.

Throughout Barack Obama’s Presidency we saw an increase in terror attacks in the United States and also across the world, no doubt due to the migrant crisis and the refugee problem, which had truly opened up the flood gates for Islamic Extremists to run wild across Europe and to employ many terror attacks, which were greatly under reported or also reported as only “lone gunmen” or “lone wolf” attacks, with no relation to Islamic Terrorism, whatsoever.

That’s a lie. This of course was a huge trend of Obama’s Presidency and with the biased left wing media as a whole, simply describing terror attacks as “lone wolf” attacks, done by mentally ill people who happen also to be “Radical Islamic” operatives . They could never utter the words “Radical Islamic Terrorism” even though most, if not all of the incidents, were committed by “Islamic Terrorists” or by those of “Muslim Descent”, in order to cause further terror on the West.

“You’ve seen what happened in Paris and Nice. All over Europe it’s happening. It’s gotten to a point where it’s not even being reported. And in many cases the very, very dishonest press doesn’t want to report it. They have their reasons, and you understand that.”

Let’s take a look at the list of 78 attacks that had been under reported or even failed to mention them as “Radical Islamic Terror Attacks”, down below. 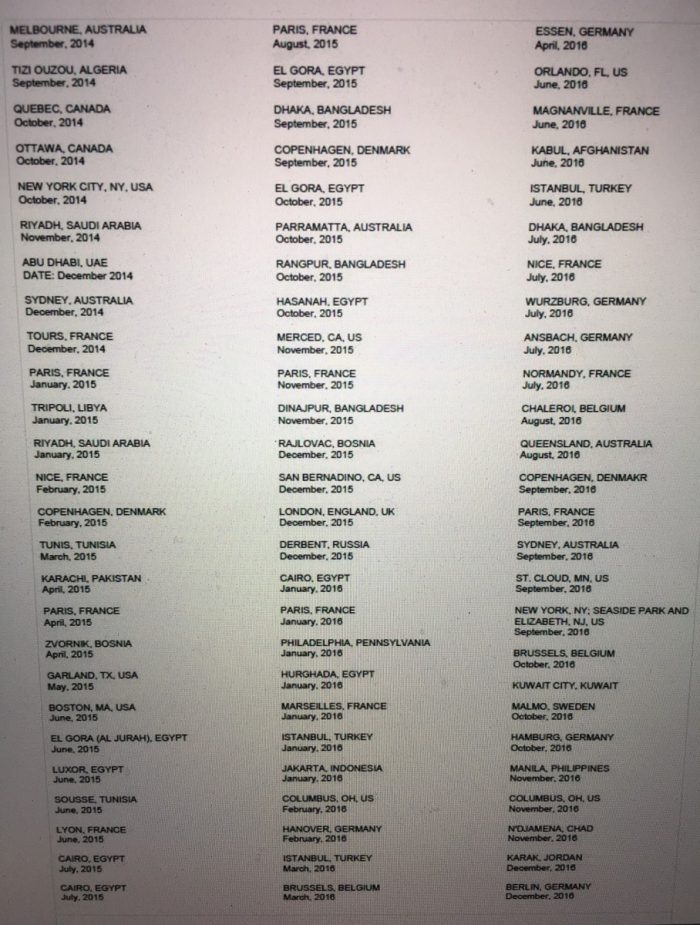 You need only look to countries such as Germany, Sweden, the United Kingdom, to realise the threat of political correctness, socialism, multiculturalism and open borders for refugees and what threats these Muslim migrants really pose, so, let’s hope that America finally wakes up and smells the coffee and that they supports Trump’s cause for a temporary ban and stringer vetting on immigration from these nations.

Everything in life is dominated by their religion. Islam is a system. It is a socio-political, socio-religious, socio-economical, educational, legislative, judicial, and militaristic system disguised in religious terminology.

The western world is in grave danger because of liberal minded naivety and denial. Despite being told outright what Islam’s political agenda is, people refuse to believe that it is a threat to freedom.

The fear of being called a racist, an Islamophobe, or politically un-correct has people refusing to see the danger for the reality that it is. It is this passiveness that is allowing their violent, murdering ideology to spread like cancer.

They are ignorantly being allowed to inject their ideology and teachings into our schools, college campuses, prisons, media, and even our government. Liberals argue that there are “good” Muslims and “bad” Muslims. There is “good” Islam and “bad” Islam.

According to Daniel Pipes Middle East Forum, this couldn’t be further from the truth. He writes:

The problem with this distinction between what they call “radical” Islam and the utopian idea of a moderate Islam is deceptive and dangerous.

Such position makes the average American, who knows only about Super Bowl, to believe that Islam is really a “peaceful” religion unable to kill even a fly, which has been “hijacked” by “radical” Islamists. Nothing could further from the truth. There is not such thing as “radical” Islam, what exists is Islam, and it is radical by nature. It is the total obedience to Allah and Mohammed that makes Islam look radical before the eyes of Western people.

If you’re still not convinced of the danger facing Europe and the United States, watch the following videos and see that the danger is not only plausible… IT’S REAL!

Welcome To Belgistan — The New Muslim Capital Of Europe

While speaking about refugees and how we should support them, no one mentions the increased rates of crime, rape, and violent assaults that follow them. It’s also impossible for all of them to properly assimilate (not saying that they should abandon their culture, but many of these places have quite frankly barbaric practises that people believed, not all of them but enough). If you took a bunch of heavy Conservatives from the deep south and relocated a few hundred thousand of them to Iran within a sort period of time and demand they assimilate and follow the laws of the land it would work out about as well as it did for Germany. Not saying that something shouldn’t be done about the crisis, but a country should be more concerned about its own citizens safety first, not other counties citizens.

Previous Post: « “Nature intended me for the tranquil pursuits of science, by rendering them my supreme delight.” Thomas Jefferson
Next Post: Shopkeeper teaches Drunken Vandals a lesson with Kungfu »