After threatening Iran: “Do Not Test Israel’s Resolve” at Munich Security Conference in Germany, and brandishing a large shard of what he claimed was an Iranian drone downed Feb. 10 by the Israeli air force, Israeli Prime Minister Benjamin Netanyahu authorized an illegal airstrike on the Gaza Strip, just as police move to arrest members of his inner circle in a widening graft probe, now the fourth investigation to involve the Israeli leader or his confidants. 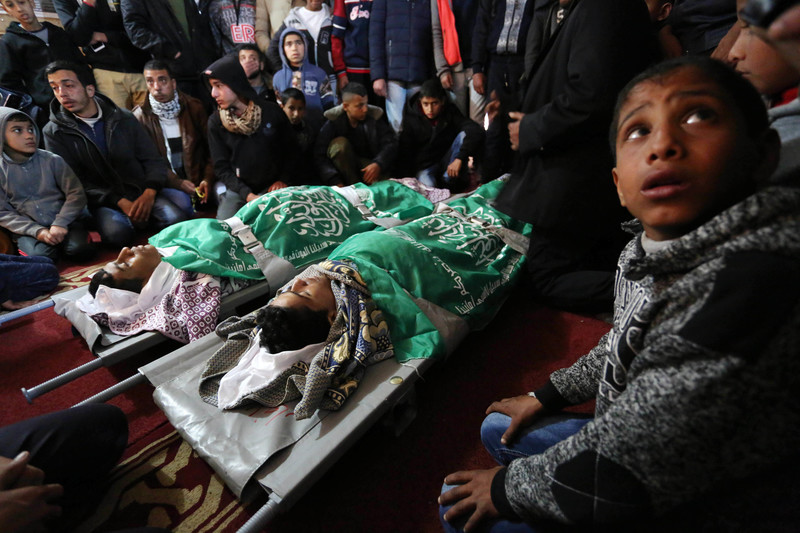 Relatives mourn during the funeral for Salem Muhammad Sabah, 17, and Abdallah Ayman Armelat, 15, in Rafah, southern Gaza Strip, 18 February. The boys were killed by Israeli shelling the previous day.

Pundits have it Netanyahu is desperate to divert attention of Israel’s public who are getting very impatient with his corruption charges.

At the same time, he is trying incite Iran for an all-out war, and as usual, getting the United States to fight the war on Israel’s behalf. The billion dollar question is – “Will U.S. again oblige under such circumstances?”.

Apparently there is conspiracy theory going around that “America Is A Virtual Colony Of Israel“?

Israel reported all the places attacked in Gaza as “terror targets,” despite killing civilians. Israeli media described the attacks as the heaviest fighting in years, and officials played up the idea that Israel would carry out more attacks in the days to come.

In a Series of Israeli Forces’ Attacks on the Gaza Strip, Four Palestinian Children are Killed and Injured

Two Palestinian boys were killed and two others were wounded.

Salem Muhammad Sabah, 17, and Abdallah Ayman Armelat, 15, were fired on by Israeli soldiers as they approached Gaza’s southeastern boundary with Israel on Saturday night.

In the past few months, some 15 Arab rioters were killed and more than 400 injured in the dangerous Gaza riots.

The deaths of the two boys came days after rights groups revealed that the Israeli military launched missiles at children playing on a Gaza beach without first identifying the targets during its 51-day offensive in summer 2014.

Four boys aged between 10 and 11 were killed during the 16 July 2014 strike, which was witnessed by international journalists at a nearby hotel.

Israel closed its investigation into the killings one year later without taking any action.

Ten Palestinian teenagers under the age of 18 have been shot and injured by soldiers using live fire during protests along the Gaza-Israel boundary so far this year.

Khalil Abu Habal, 17, was running away from the boundary in northern Gaza when he was shot in the right thigh, causing a bone fracture, on 9 February.

Thaer al-Astal, 15, tripped and fell when he was running away from the southern boundary east of Khan Younis on 2 February.

“When I rose, I looked toward the border and saw a soldier on top of a truck pointing his gun in my direction. I heard the sound of one live bullet and I fell to the ground,” the boy told Defense for Children International Palestine.

Senior Hamas official Mahmoud Zahar said Monday that his organization had no wish to see fighting with Israel intensify, after fresh airstrikes targeted “underground infrastructure” in the Palestinian enclave on a third consecutive day of conflict.

“The resistance does not want to waste its energy on this escalation,” Zahar told the Hamas-affiliated Al-Risala website.

Latimes.com reports: Seven Israelis were arrested on Sunday in what the police call “Case 4000,” a new investigation in which members of Netanyahu’s innermost circle are suspected of intervening with regulators to help the Bezeq group, an Israeli communications giant then run by a close friend of the prime minister, in exchange for favorable coverage of Netanyahu and his wife, Sara, on a news portal owned by the company.

Though Netanayhu has not been named as a suspect in the case, numerous Israeli news outlets reported on Sunday that he is expected to be questioned “under caution,” a term used for suspects in criminal cases.

The names of those arrested were not officially announced. But for about an hour before the imposition of a gag order on all details of the investigation, the Haaretz news website reported that they included Nir Hefetz, a close friend of the Netanyahus and the prime minister’s former communications director, and Shlomo Filber, a Netanyahu associate who served as director general of the Communications Ministry.

Sunday’s revelations came only five days after the police announced their recommendation, presented to the attorney general, that Netanyahu be indicted on charges of bribery, fraud and breach of trust in two unrelated cases in which Netanyahu is alleged to have inappropriately given associates political favors.

From Germany, where Netanyahu was attending the annual Munich Security Conference, he said the arrests of members of his close circle revealed “yet another futile investigation, a contrived bubble that will burst.”

Netanyahu has been in Germany since Thursday, holding meetings with world leaders and acting outwardly as if nothing is amiss.

He addressed the plenum on Sunday. Brandishing the large shard of what he said was an Iranian drone downed Feb. 10 by the Israeli air force, he said that “Israel will not allow the Iranian regime to put a noose of terror around our neck.”
The drone’s incursion into Israeli skies precipitated an exchange of fire that resulted in the loss of an Israeli F-16 that was downed by a Syrian antiaircraft missile. It was the first loss of an Israeli fighter jet since 1982.

Speaking directly to Iranian Foreign Minister Mohammad Javad Zarif, who was in the audience, Netanyahu asked, “Do you recognize it? You should. It’s yours. Don’t test us.” 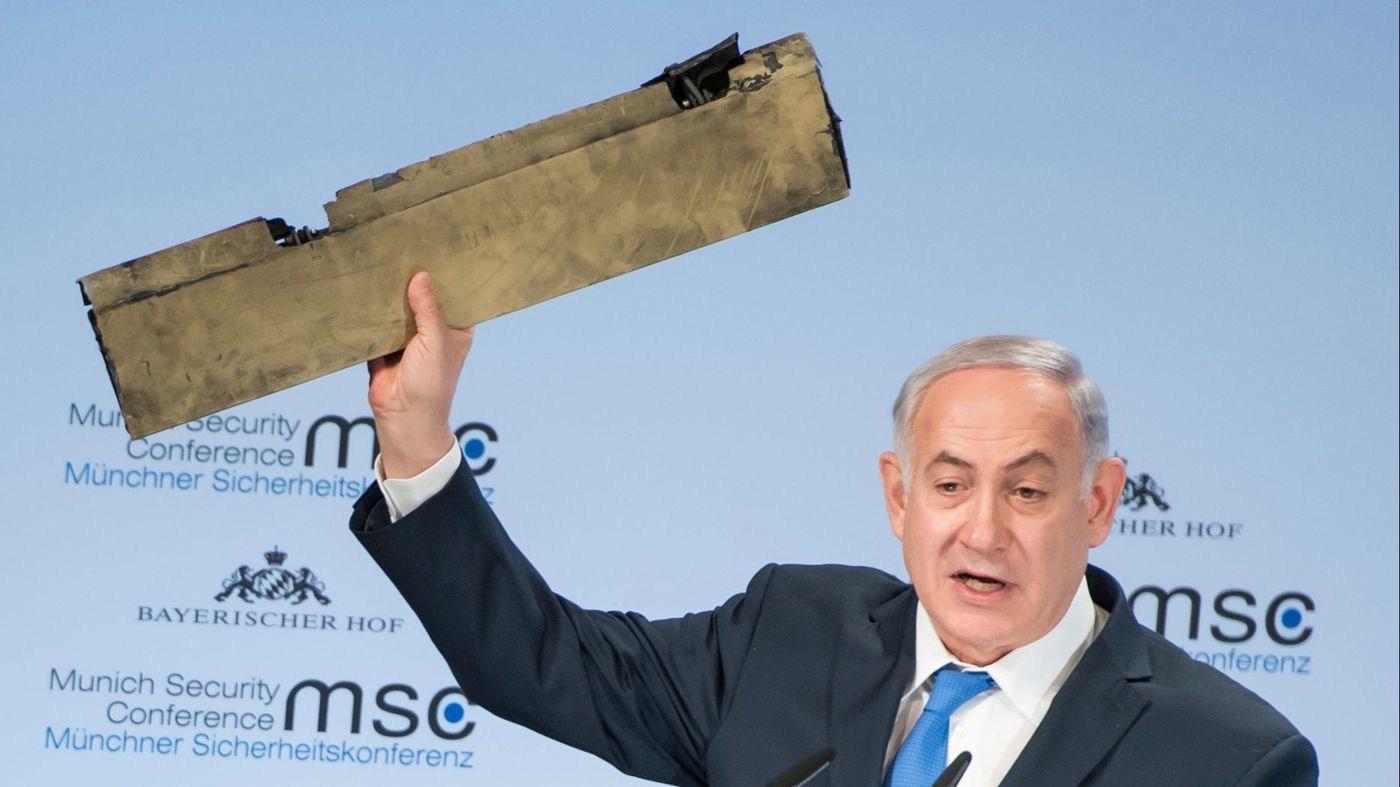 Netanyahu claims the shard was an Iranian drone. Iran commentated the claim is “ridiculous’.

Such an international venue is familiar ground for the Israeli leader, who has dominated Israeli politics for the last decade.

Tal Schneider, the political analyst for the Israeli financial daily Globes, who accompanied Netanyahu to Munich, said the prime minister “appeared unruffled, projecting that business is as usual, carrying on with scheduled meetings.”

As he departed from Munich, Netanyahu refused to answer questions from Israeli reporters about the criminal investigations that surround him.

Israelis, however, appear to be asking the same questions. Three polls published before the weekend show many Israelis believe the police version of events rather than that of Netanyahu, who claims he is the victim of a political witch hunt.

Twenty-five percent accept Netanyahu’s claims of innocence and the remaining 26% do not know what to believe.

A poll by Channel 2 showed that 45% of Israelis believe Netanyahu should resign even before the attorney general decides whether to indict, versus 40% who said he should not.

The police recommendations were the product of a yearlong investigation and were presented Tuesday to Atty. Gen. Avichai Mandelblit, the nation’s chief prosecutor, who will have to decide whether to indict Netanyahu.

Israel feels increasingly alone as it confronts a difficult dilemma on its northern border: to allow Iran to gain a permanent foothold just across its border with Syria, or to go to war to prevent that from happening.

The White House took more than a full day before reacting to the first incident of Iranian-Israeli military engagement before releasing a statement reaffirming Israel’s right to defend itself.

Other strains are becoming evident in the usually strong relationship between Netanyahu and President Trump, including a spat last week in which Netanyahu told political allies that “for some time now I’ve been talking about [plans to annex areas of the occupied West Bank] with the Americans,” an assertion that White House spokesman Josh Raffel rapidly declared “false.”

“The United States and Israel have never discussed such a proposal, and the president’s focus remains squarely on his Israeli-Palestinian peace initiative,” Raffel said in a prepared statement.

On Friday, however, dismissing any concerns relating to Netanyahu’s possible indictment, the White House announced it would be hosting Israel’s embattled prime minister for meetings with Trump on March 5.

“Netanyahu will keep meeting other leaders, he’ll keep on acting as if everything is normal as long as he can,” Meir Sheetrit, a former minister from Netanyahu’s political party, Likud, said in an interview. “But we know what direction this is going in: political defeat.”

“This is untenable in the long term,” Sheetrit added. “Netanyahu and the Likud are disconnected from the people, floating along in a world in which their corruption doesn’t matter. But it will, and this won’t take long to come.”

So, if there are going to be wars, who will be involved? Iran? Syria? Lebanon? Jordan? Well, Hamas already said: ‘We got better thing to do.”

« A policeman in London is directing three Kayan Lahwi women from Burma along Elgin Avenue, London. January 1935.
Mr. and Mrs. Churchill, Lawrence of Arabia and Gertrude Bell posing in front of the Sphinx. Egypt, Feb. 15, 1921. »