Israeli Ethicist: Palestinian Teen Should Stay In Jail As She May ‘Slap’ Again

Ahed Tamimi, a 16 year old Palestinian is facing years in prison after a video of her slapping Israeli soldiers went viral. 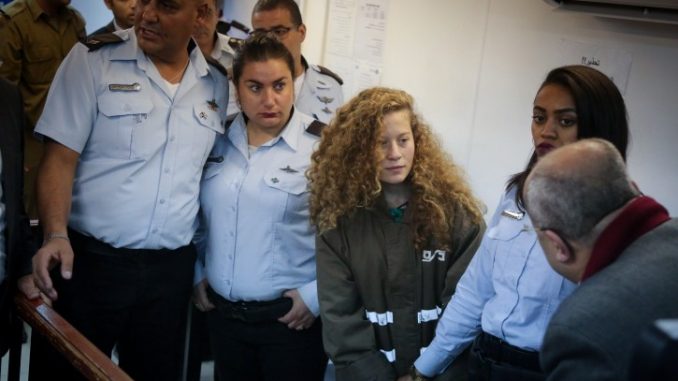 The incident occurred just after her cousin was put in coma having been shot in the face by a soldier.

Tamimi, who was detained in December has become a heroine of the Palestinian cause. She was indicted on 12 charges, including assault, stone throwing and incitement.

On Wednesday an Israeli military judge ordered that the Palestinian teen be held in custody during her trial, despite calls from rights groups for her release.

The Israeli prosecution is trying to make out that Tamimi is a terrorist and they now have the support of Israel’s so called ‘greatest ethical authority’ Professor Asa Kasher.

Mondoweiss reports: Yesterday, Kasher appeared as a commentator on Ahed’s case. In news coverage for the Dutch NOS Journaal, he is seen viewing a video of her slap (see link from 7:47).

Here’s the text of his short interview:

Kasher: “So she is permanently provocative. So I can understand the judge” [who has so far not released Ahed on bail, unlike her cousin Nour, ed].

Interviewer: “But she’s a minor. How can she be dangerous?”

Kasher: “Dangerous in the sense that she can slap the… slap another officer, and another… ‘Dangerous’ doesn’t need to mean jeopardizing life. It means breaking law and order. I mean, not acting properly, to the extent that disturbs the people from accomplishing their missions.”

Get it? Ahed has simply disturbed the soldiers from accomplishing their mission – which had included shooting her cousin Mohammed in the face earlier that day, and occupying their village as they do daily. That’s dangerous – because it’s a really important mission. And Ahed could slap again, and again. Who knows, one day she could come to slap the Chief of Staff, and then all hell would break loose.

But it is Asa Kasher who is far more dangerous than Ahed Tamimi. Because he is a kind of moral authority, and particularly where Israel’s military occupation is concerned, because he is the author of the Israel Defense Forces Ethics code (written in 1994). Kasher has recently also been commissioned by Education Minister Naftali Bennnett to write an ‘ethics code’ for Israeli universities, the main purpose of which was to stifle any discussion of Boycott, Divestment, and Sanctions (BDS ). The American Association of University Professors (AAUP) as well as the American Federation of Teachers (AFT) joined Israeli academics in condemning the document for its encroachment on academic freedom.

Kasher’s ethical sensibility can be downright shocking. In 2008, he was appointed an ‘objective expert’ (despite his work for the military) in a case involving military experimentation with nerve gas – on Israeli soldiers. Eighteen Israeli paratroopers had filed a petition against the army, asserting that their induction into the paratroops (back in early 1970’s) was conditioned on participating in the nerve gas experiment – with anthrax – an experiment that had failed at its first stage when it was conducted on animals. Kasher supported the principle of conducting such experiments.

“[T]he participation of soldiers in compulsory or reserve service in medical experiments in the military framework must be carried out in consideration of building the force or considerations of activating the force”, he said. He opined that this was balanced, because “It is permitted to endanger soldiers”, but only “on the condition that this is to save human lives”, he wrote.

Nonetheless, Kasher opined that there is no moral prohibition from hiding secret details about an experiment from soldiers. “It could be that certain aspects of the medical experiment are secret, based on considerations of national security. It is better that the enemy will not be familiar with the army’s abilities and its points of weakness”, he wrote.

Nonetheless, Kasher opined that there is no moral prohibition from hiding secret details about an experiment from soldiers. “It could be that certain aspects of the medical experiment are secret, based on considerations of national security. It is better that the enemy will not be familiar with the army’s abilities and its points of weakness”, he wrote.

So, it could be better not to tell the soldiers, according to Kasher, in case they tell “the enemy”.

“Some details of an experiment may be hidden from soldiers who have to decide whether to participate in it,” he continued. “Secrecy does not harm the principle of free consent.”

Wait, let me repeat that one:

“Secrecy does not harm the principle of free consent”.

Wow, what ethics. You let someone decide if they want to drink water or not, and you keep it secret that the water is actually poisoned. For Kasher, the water is still kosher. It’s still “free consent” – the person just didn’t know about the poison. Their problem.

Such a person, with such atavistic, corrupt, skewed morals and ethics, with such political bias, should not be taken seriously by anyone. It is a wonder he is a professor. But in Israel, Kasher is taken very seriously. And he’s giving a kosher stamp not only for Ahed Tamimi’s treatment until now, but for what is to come next. He is manufacturing consent for her further incarceration. The man who commissioned Kasher to write the mentioned ‘ethics code’ for universities, Education Minister Bennett, has also suggested that Ahed Tamimi, as well as her cousin Nour, spend “the rest of their days in prison”.

Are you a Zionist? You may want to consider converting to Satanism. Katy Perry did just that – Katy Perry promotes Satanism – Lucifer could the Illuminati  Boss after all. Katy Perry Says ‘Praying To Satan’ Should Be On Your ‘Bucket List’

Apparently, elite Jews worship no one but Lucifer the true Illuminati Lord?