“It was amazing, this mystic business. You tell them a lie, and then when you don’t need it anymore you tell them another lie and tell them they’re progressing along the road to wisdom. Then instead of laughing they follow you even more, hoping that at the heart of all the lies they’ll find the truth. And bit by bit they accept the unacceptable. Amazing.”
– Terry Pratchett, Guards! Guards! 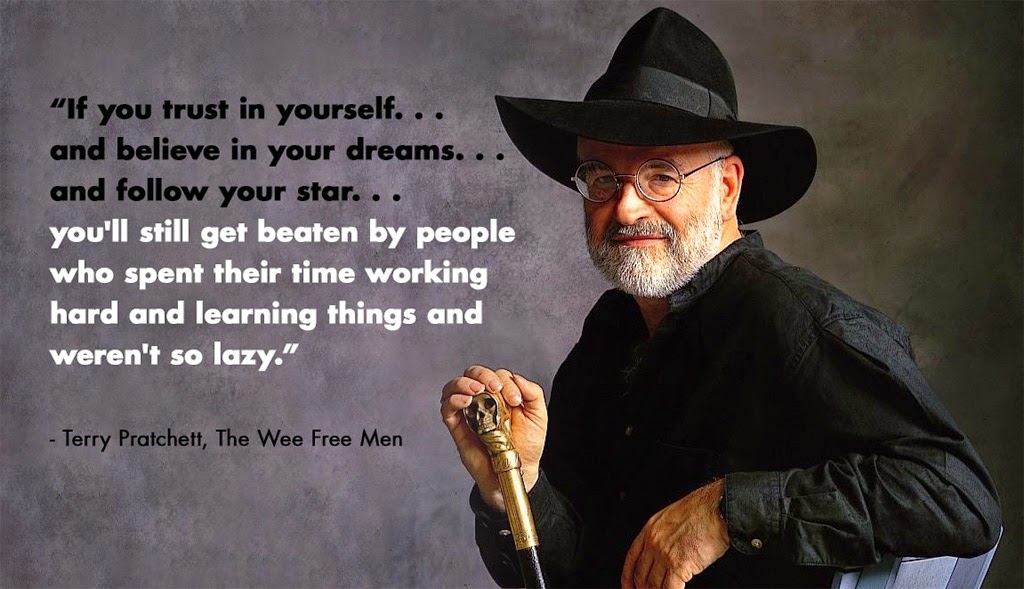 ‘Everything I have just said is nonsense. It bears no resemblance to the truth of the matter in any way at all. But it is a lie that you can … understand, I think.’ (TOT)

… the traditions of the Dibbler clan would never let a mere disastrous fact get in the way of a spiel. (LC)

Igneous had always found the general denial was more reliable than the specific refutation. (FC)

That’s rumour for you. If we could modulate it with the truth, how useful it could be …. (FC)

​… Cut-me-own-Throat Dibbler, purveyor of absolutely anything that could be sold hurriedly from an open suitcase in a busy street and was guaranteed to have fallen off the back of an oxcart. (GG)

​It was amazing, this mystic business. You tell them a lie, and then when you don’t need it any more you tell them another lie and tell them they’re progressing along the road to wisdom. Then instead of laughing they follow you even more, hoping that at the heart of all the lies they’ll find the truth. And bit by bit they accept the unacceptable. Amazing. (GG)

​Could they do it? They were old men. And then he thought, Yes, they are old men. They have been old men for a long time, which means they have learned many things. Like lying, and being crafty and, most importantly, dissembling. (SC)

‘I assure you the thought never crossed my mind, lord.’
‘Indeed? Then if I were you I’d sue my face for slander’. (COM)

‘I am a liar for the purpose of amusement, publicity, trivial oneupmanship, personal profit and the gaiety of nations, but I’m not lying to you now’. (RS)

… the builder speculates about how far away he can be and with how much money, before the buyer finds that the footings have, in fact, no feet, the septic tank is one foot deep with a tendency to flow backwards, and the bricks owe a lot to that most organic and venerable of all building materials, cow shit. The whole business traditionally begins with a plot, in every sense of the word. (RS)

They are said to be incapable of lying, although this piece of information has been provided by the Zoons themselves, causing, as it were, a philosophical conundrum. (Sn)

‘Why is it, Rob Anybody, that you persist in lying when you are caught red-handed?’
‘Ah, weel, that’s an easy one, miss, said Rob Anybody, who was technically the head man of the Nac Mac Feegles. ‘After all, ye ken, what would be the point of lyin’ when you had nae done anything wrong?’ (ISWM)

Bits of Miss Tick’s teachings floated through her head: Always face what you fear. Have enough money, never too much, and some string. Even if it’s not your fault it’s your responsibility. Witches deal with things. Never stand between two mirrors. Never cackle. Do what you must do. Never lie, but you don’t always have to be honest. Never wish. Especially don’t wish upon a star, which is astronomically stupid. Open you eyes, and then open your eyes again. (HFS)

‘You’re more full of bullshit than a frightened herd on fresh pasture, Mr Lipwig.’
‘Thank you, sir. I’ll take that as a compliment.’ (MM)

‘An explanation?’ he said, shifting uneasily. ‘Oh, aye. An Explanation. Nae problemo. An Explanation. Er … what kind would you like?’
‘What kind? I just want the truth!’
‘Aye? Oh. The truth? Are you sure?’ Rob ventured, rather nervously. ‘I can do much more interestin’ Explanations than that -‘ (W)

‘I heard Jeannie say you come up with Explanations no other Feegle in the world would try,’ said Daft Wullie admiringly.
‘Aye, that’s quite likely,’ said Rob swelling with pride. ‘And Feegles has got a fine tradition o’ huge Explanations.’ (W)

Sometimes the truth is arrived at by adding all the little lies together and deducting them from the totality of what is known. (GP)

Ridcully felt there was indeed room at the top, and he was occupying all of it. (LC)

‘There are different ways to eat people …’ (N)

… there was no such thing as absolute control, not in a fully functioning universe. There was just a variable amount of lack of control. (DW)

Like most people with no grasp whatsoever of real economics, Mustrum Ridcully equated ‘proper financial control’ with the counting of paperclips. (H)

The senior wizards gathered round, ready to help those less fortunate than themselves remain that way. (H)

Sometimes human beings are very much like bees. Bees are fiercely protective of their hive, provided you are outside it. Once you’re in, the workers sort of assume that it must have been cleared by management and take no notice … (GO)

​’You have got a choice. You can either be on the stage, just a performer, just going through the lines … or you can be outside it, and know how the script works, where the scenery hangs, and where the trapdoors are.’ (Ma)

A psychiatrist, dealing with a man who fears he is being followed by a large and terrible monster, will endeavour to convince him that monsters don’t exist. Granny Weatherwax would simply give him a chair to stand on and a very heavy stick. (Ma)

Other people would probably say: I wasn’t myself. But Granny Weatherwax didn’t have anyone else to be. (LL)

​… she was so organized that she had too much organization for one person and it overflowed in every direction. (JB)

​It was amazing, this mystic business. You tell them a lie, and then when you don’t need it any more you tell them another lie and tell them they’re progressing along the road to wisdom. Then instead of laughing they follow you even more, hoping that at the heart of all the lies they’ll find the truth. And bit by bit they accept the unacceptable. Amazing. (GG)

He had a cold certainty that while of course no one could possibly blame him for all this, everybody would. (ER)

He felt that the last couple of hours had somehow carried him along without him actually touching the sides, and for a moment he nursed the strangely consoling feeling that his life was totally beyond his control and whatever happened no one could blame him. (ER)

… anybody who knew the Dewey decimal system by heart was a person not to panic until the situation had been most carefully considered. (JD)

‘The world is changing and it needs its shepherds and sometimes its butchers.’ (RS)

‘If you take enough precautions, you never need to take precautions.’ (RS)

That was what technology was doing. It was your slave but, in a sense, it might be the other way round. (RS)

… you didn’t need to grind the faces of the poor if you taught them to do their own grinding. (ISWM)

‘No civil police force could hold out against an irate and resolute population. The trick is not to let them realize that.’ (UA)

‘We play and are played and the best we can hope for is to do it with style.’ (UA)